President Bush last week vetoed a supplemental funding bill for the Iraq war sent to him by the Democrat-controlled congress, because the legislation would have required troops to begin leaving Iraq later this year. Democrats do not have enough votes to overturn the veto in either the Senate or the House. Senate Majority Leader Harry Reid and House Speaker Nancy Pelosi vow to include some form of military redeployment in any future spending bill. The president applied his veto on the four-year anniversary, to the day, of his infamous declaration that "major combat operations in Iraq have ended." The speech was given onboard the aircraft carrier USS Abraham Lincoln under a banner reading "Mission Accomplished."*:Bush vetoed the funding bill on the deck of an aircraft carrier-which had been dragged by tanks onto the White House lawn-hung with a banner reading "Bite Me."

A massive tornado devastated Greensburg last week, killing at least 10 and wounding scores more while wiping out 95% of the southwest Kansas town. The National Weather Service classified the Friday night tornado as an F-5, the highest category on its scale, with winds estimated at 205 mph carving a track 1.7 miles wide and 22 miles long. Gov. Kathleen Sebelius said Sunday evening that the state's response will likely be hampered because much of the equipment usually positioned around the state to respond to emergencies-including tents, trucks and semi-trailers-is now in Iraq.*:Fortunately, no Kansas National Guardsmen were injured in the rescue and clean-up efforts in Greensburg-because they were still in hospitals after getting injured in Baghdad. 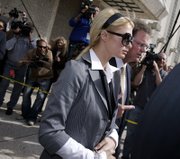 Paris Hilton, the 26-year-old socialite and hotel heiress best known for her partying, was sentenced to 45 days in a suburban Los Angeles jail for driving without a valid license. Hilton's license had been suspended for multiple drunk driving convictions. "I feel that I was treated unfairly and that the sentence is both cruel and unwarranted," said a tearful Hilton after the sentencing. "I don't deserve this."*:In jail, she'll be subjected to dehumanizing conditions, treated like a soulless object, and stripped of identity-what Hilton normally refers to as "Wednesdays."

An immigration rally in Los Angeles turned violent last week when some 600 police officers fired more than 240 rubber bullets and beat demonstrators and members of the news media with batons, but made no arrests. Los Angeles Police Chief William J. Bratton expressed "grave concern" about his officers' tactics in dispersing the largely Hispanic crowd at MacArthur Park and has vowed a full investigation*:Bratton later apologized to those who were assaulted, saying it was merely a case of mistaken identity. "We thought you all were Muslims," said Bratton. "Honest mistake." 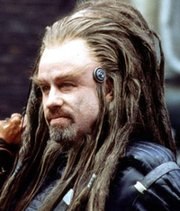 Republican presidential candidate Mitt Romney said in an interview last week that his two favorite books were the Bible and "Battlefield Earth," the sci-fi novel by L. Ron Hubbard. The latter pick by the Mormon Romney raised the eyebrows of many political observers as Hubbard is the founder of Scientology, a religion which believes that human psychological problems are caused by alien ghosts brought to earth by a galactic overlord named Xenu.*:Romney clarified that he enjoyed "Battlefield Earth" because it provides insight into Scientology, a religion that even Mormons can laugh at.

DON'T CALL IT A COMEBACK:PLEASE

Pop princess Britney Spears, recently out of rehab and purportedly sporting fresh plastic surgery, emerged from seclusion to perform in a series of surprise live shows in California and Nevada last week. The sets were only 15 minutes long, consisted of Spears lip-syncing with backup dancers, and cost fans up to $500 per ticket.*:A spokesperson explained to disappointed fans that the lip-synching was unavoidable. Spears had apparently paralyzed her voice box when, after reaching for an airplane bottle of vodka in the mini-fridge, she accidentally drank her vial of Botox.

Mayor Sue Hack on May 3, 2007, conceded that she did not file the state-required paperwork disclosing her financial interests in a company receiving cash and economic development incentives from the city.

Lawrence Mayor Sue Hack at last week's City Commission meeting opened the door for Wal-Mart to resubmit a building plan for a new store at Sixth and Wakarusa, a move that many who oppose the new store view as capitulation to Wal-Mart's lawsuit against the city. Just days after the April 3 elections, which saw two Wal-Mart opponents leave the commission, the city asked Wal-Mart to put its lawsuit against the city on hold. The lawsuit alleges the city illegally denied a building permit for the Wal-Mart store. Public commentary at the meeting was almost entirely opposed to a new Wal-Mart, ranging from traffic concerns to fears that it would damage existing retail businesses in the community.*:A lawyer for Wal-Mart disputed those claims, saying that another location in Lawrence would generate more jobs for the local economy, adding "if by 'local economy' you mean 'shanty town in Guangdong Province.'"

In his new book, "At the Center of the Storm," former CIA Director George Tenet claims that the Bush administration didn't take seriously his pre-9/11 warnings of the imminent threat posed by Osama bin Laden and had been focused on invading Iraq well before the terrorist attacks in 2001. Tenet also states he was made the fall guy for Iraq policy failures when his statement about weapons of mass destruction intelligence being a "slam dunk" was leaked to the press. Tenet insists that his "slam dunk" quote was taken out of context and that he never guaranteed the Bush administration the existence of weapons of mass destruction in Iraq.*:"I guaranteed that they'd be able to get away with lying about the existence of weapon of mass destruction," Tenet clarified.

I FART IN YOUR GENERAL ELECTION!

Nicolas Sarkozy, a pro-American conservative, defeated socialist Segolene Royal to become the president elect of France by 53% to 47% with an 84% voter turnout, according to final results released early Monday. Sarkozy ran on a platform of deregulating labor markets, reforming immigration policy and repairing strained relations with the United States.*:While 84% of France turned out to vote, the other 16% of the French were either too sober or too employed to make it to the polls. 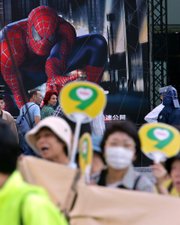