A weekly children's show on a Hamas-run TV station featuring a Mickey Mouse look-alike preaching Islamic domination remained on the air last week, despite the Palestinian information minister responding to international pressure and saying it would be suspended. Named Farfour, the giant mouse character delivers pro-Islamic and anti-Western messages in a high-pitched voice, such as, "You and I are laying the foundation for a world led by Islamists. We will return the Islamic community to its former greatness, and liberate Jerusalem, God willing, liberate Iraq, God willing, and liberate all the countries of the Muslims invaded by the murderers" and "The Jews destroyed my house" and "We will win, Bush!"*:Hamas has since relented and will replace Farfour with the even more popular "Teenage Mutant Anti-Semites." 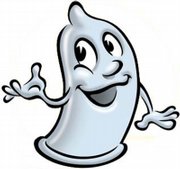 The Kansas State Board of Education last week overturned "abstinence only" sex-education standards, replacing them with what the board termed "abstinence plus" standards that would encourage abstinence but also provide birth-control and safe sex information. This is the second major reversal of conservative standards that the new, moderate board has enacted, coming on the heels of reinstating science curriculum that emphasizes Darwinian evolution.*:The Board of Education also overturned language in the standards that claimed you could get AIDS from watching "An Inconvenient Truth."

Kansas Gov. Kathleen Sebelius said last week that clean-up and rescue efforts at the tornado-ravaged town of Greensburg have been hamstrung by so much of the National Guard's equipment being shipped off to Iraq. "I don't think there is any question if you are missing trucks, Humvees and helicopters that the response is going to be slower," said Sebelius. "The real victims here will be the residents of Greensburg because the recovery will be at a slower pace." White House spokesman Tony Snow, in a response similar to the one given to Louisiana's governor following Hurricane Katrina, quickly shot back that any equipment shortage was Sebelius' fault. "If you don't request it, you're not going to get it," said Snow. "As far as we know, the only thing the governor has requested are FM radios." Snow backed off of the comments when it was revealed that Sebelius had in fact requested aid and equipment on several occasions.*:Snow went on to say that none of this would even be an issue if the citizens of Greensburg hadn't built their town so precariously. "All of that exposed housing was just begging the tornado to strike," said Snow. "They were asking for it." 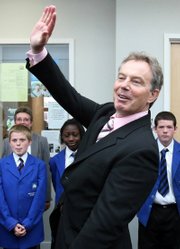 British Prime Minister Tony Blair, amid increasing public hostility towards his decision to support American Iraq policy, announced last week he will step down June 27. He will in all likelihood be replaced as prime minister by fellow Labour Party leader, Gordon Brown.*:In an arcane quirk of British parliamentary procedure, Blair will be formally chased out of the House of Commons by half-naked women in powdered wigs while a loudspeaker plays the Benny Hill theme song.

THE GLOWER OF LONDON

The Queen of England, Elizabeth II, wrapped up her trip to the United States last week with a formal white-tie gala at the White House. In a rather awkward gaffe earlier in the week, President Bush-with the queen standing next to him-mistakenly thanked her for helping celebrate the American bicentennial in "1776." While Bush and the audience laughed, the queen appeared unamused at the implication she was over 231 years old.

At the White House dinner in her honor, the queen began a toast with, "I wondered whether I should start this toast by saying, 'When I was here in 1776 ...'"*:President Bush, with his penchant for giving close allies nicknames (i.e., Karl "Turd Blossom" Rove and Alberto "Fredo" Gonzales), later attempted to endear himself to the Queen by repeatedly calling her "Wrinkles Magoo." 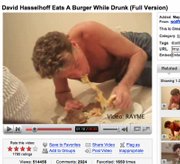 "Baywatch" and "Knight Rider" star David Hasselhoff admitted last week that a video of him visibly drunk, which has been circulating on the internet and tabloid television for weeks, is genuine. The clip, taped by his 16-year-old daughter, shows a shirtless, slurring Hasselhoff obviously inebriated, sprawled on the floor trying to eat a cheeseburger while his daughter pleads with him to stop drinking. "I am a recovering alcoholic," Hasselhoff said in a statement. "Unfortunately, one evening I did have a brief relapse, but part of recovery is relapse."*:Hasselhoff realized he had hit rock bottom when doctors informed him that the reason he was running in slow motion on the beach wasn't due to glamorous cinematography, but rather his slowly failing liver.

According to a study released last week, the internal fat surrounding vital organs like the heart, liver or pancreas-invisible to the naked eye-could be as dangerous as the more obvious external fat that bulges underneath the skin. Dr Jimmy Bell studied the MRI "fat scans" of over 800 patients in London and concluded that "being thin doesn't automatically mean you're not fat."*:Jubilant fat people, overjoyed that skinny people could now technically be considered "fat," attempted to jump up and down.