The Pentagon last week cut off internet access for soldiers to MySpace, YouTube and 11 other popular websites, citing security concerns and the technological limits of the military's online network. The policy is officially meant to preserve bandwidth and prevent web-attacks on the military infrastructure such as viruses, but also to limit the possibility of soldiers posting sensitive information. Critics have suggested that it's a public relations measure meant to stanch the flow of bad news coming out of Iraq and Afghanistan.*:The Pentagon insisted the YouTube ban was vital for the safety of all Americans, as they fear a soldier might accidentally provide al Qaeda with the blueprints for a Mentos and Coke dirty bomb.

MISSED THE RAPTURE BY THAT MUCH

The Rev. Jerry Falwell, television minister and conservative evangelical leader, died last week at the age of 73. He was found unconscious in his office at Liberty University, the Christian college he founded in Lynchburg, Va., and was pronounced dead shortly thereafter. The exact cause is unknown, but he had a history of heart problems. Falwell gained national recognition when he began the Moral Majority, a religious political activism organization that is credited with helping Ronald Reagan win the presidency in 1980. He went on to become a major figure of the conservative right, giving voice to the evangelical Christian movement. Falwell gained notoriety in recent years for boycotting children's television show "Teletubbies"-claiming that Tinky Winky was gay-and blaming the terrorist attacks of September 11 on feminism and homosexuality. *:Paramedics at the scene say they found Pastor Fred Phelps standing over the corpse, holding aloft Falwell's severed head and absorbing all of his homophobic power, screaming "There can be only one!" 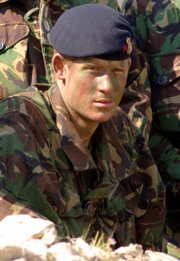 Britain's Prince Harry will not serve in Iraq as a troop commander because of "a number of specific threats" against him, the UK's top general said last week. A spokesperson for the 22-year-old prince says he is "very disappointed" by the decision. The announcement reverses a statement made in February by the Ministry of Defence and the royal family, which said that Harry would be sent to Iraq with his regiment. British intelligence is concerned that Harry will be a prime target of Iraqi militants for kidnapping or killing, putting his unit at "unacceptable" risk.*:As an entitled ne'er do well from a powerful family seeking to avoid military service in an unpopular war, Harry has been transferred to the Alabama National Guard.

TRIUMPH OF THE SWILL

The Replay Lounge, one of Lawrence's most storied Massachusetts Street drinkeries, was named best bar in Kansas by Esquire magazine last week. "(The Replay) seemed like a fun, vibrant, happening place," said Buddy Kite, one of the editors for Esquire's second annual compilation of the best bars in America. "The vivid painting, cheap drinks and 'their great enthusiasm for pinball' we thought was really interesting. And they had a real strong music booking that nurtured the local music scene and got some impressive acts in there."*:To celebrate the lounge's newfound stature as a national treasure, the City Commission replaced Lawrence's tap water with the Replay's signature beverage, Pabst Blue Ribbon-and no one noticed. 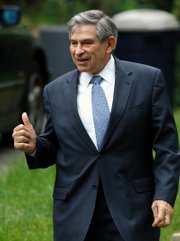 Embattled former Deputy Secretary of Defense Paul Wolfowitz bowed to international pressure last week and agreed to step down from his current position as president of the World Bank. Because his role as a primary architect of the Iraq invasion, Wolfowitz had always been a controversial pick by President Bush to head the global poverty institution. But tensions were further inflamed when it was revealed he had arranged a promotion and hefty pay raise for his girlfriend who also worked at the World Bank. As part of the agreement for his resignation, Wolfowitz will not admit any wrongdoing and will receive a reported severance package of over $400,000.*:The newly unemployed Wolfowitz has posted his resume under the categories of "Neoconservative Warmongering Ideologue" and "Corrupt World Body Bureaucrat" on Monster.com.

BROTHER CAN YOU SPARE 10 MILLION DIMES?

Lawrence City Manager David Corliss last week proposed a series of budget cuts meant to deal with a projected revenue shortfall of nearly $1 million. Organizations such as Bert Nash Community Mental Health Center, Salvation Army and Boys and Girls Club have been told they'll receive 6 percent less in city funding than what commissioners previously approved for the 2007 budget. Corliss hopes to cut $3.5 million out of the budget in response to an expected decline in sales tax revenues and a slowdown in the real estate market.*:In addition to a decline in revenue, Corliss also admitted the city may have been a bit hasty when it bet the entire budget on Oscar De La Hoya. "Blake on 'American Idol' is totally a sure thing, though," reassured Corliss.

Former Deputy Attorney General James Comey gave dramatic testimony last week before the Senate Judiciary Committee regarding an incident in 2004 involving then Attorney General John Ashcroft and then White House Counsel Alberto Gonzales. Comey described how Gonzales attempted to get Ashcroft to sign off on President Bush's domestic spying program, even though Ashcroft was still in a hospital bed following gall bladder surgery. Ashcroft, heavily medicated, refused to sign off on the program and argued that he could not verify its legality. Comey, who was the acting Attorney General while Ashcroft was incapacitated, considered the hospital visit by Gonzales an end run around the law and "an effort to take advantage of a very sick man." The White House continued the domestic surveillance program without Justice Department approval and Comey resigned in protest.*:Senators were stunned when they heard the testimony, mostly because it somehow made them nostalgic for John Ashcroft.

Bright red insects, barely larger than the tip of a pin, have begun their annual infestation of Lawrence in the past few weeks. Called predaceous mites, they're most common in early May. They begin developing in the fall, when eggs are laid in cracks of building foundations. In the spring, those eggs hatch, and the tiny pests crawl into homes or offices, usually hanging out on windowsills or curtains. They're harmless and will disappear when temperatures climb above the 80s *:Entomologists have traced the billions of disgusting mites back to Matthew McConaughey's crotch.