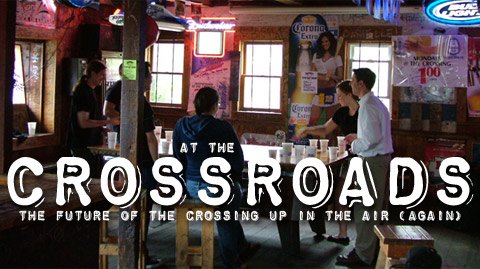 Three in the afternoon. Finals week. The Crossing.

Sun shines in through the open door. Tom Petty plays on the speakers. Behind the bar, the bartender does the sudoku with her legs crossed. Students fresh from a final play beer pong. All seems right with the world.

But as everyone in this old wooden building knows, all is not right. As everyone knows, beneath the surface The Crossing's fate is as unpredictable as a drunk's next move.

The bartender, Marie Peil, 23, long ago stopped paying attention to rumors. She lazily recounts the developments that were supposed to doom the place months ago like she's reciting pages from a dusty western civ textbook.

Last June, she recalls, the property was sold.

("Diamond formation!" yells one of the beer pong players.)

No big deal, the bartenders thought. The property had been sold before. What does it matter where the rent goes?

But then there were the plans to level the place, along with Yello Sub two doors down and the surrounding buildings, and build a new mixed-use development.

It happens that on this afternoon the beer pong players are a group of grad students studying architecture. They saw the renderings. They are not fans.

"That would be horrible if this place went down," Tim Overstreet says. "Horrible. For another ugly, cookie-cutter shopping center." All he can do is shake his head.

"We've learned that you don't really trust anything until all the paperwork's signed," Peil says, leaning back against the wall behind the bar.

Several months passed. Tension settled. Weeks ago, two new businesses moved in-Beat the Bookstore between The Crossing and Yello Sub and Big 12 Burritos behind The Crossing.

(Laughter erupts from the beer pong table. Peil looks up and smiles.)

And then, less than two weeks ago, something important happened. Morrow sold the Yello Sub and Beat the Bookstore property to Todd Sutherland and Thomas Fritzel of Lawrence. 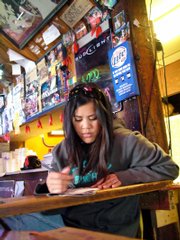 Morrow said he was through trying to get something going with the new development. He said there was too much disagreement. Sutherland didn't say much about his plans for the property or whether he and Fritzel were angling to buy The Crossing property as well.

"We're not for sure yet on that," Sutherland said. Pottroff didn't return calls.

On this day at Yello Sub, employees have just learned the news. Who knows what Sutherland and Fritzel will do? They hope nothing.

"This is like a Lawrence institution, a KU institution," Matt Ainsworth, 19, says from behind the counter. "Maybe he wouldn't have the audacity to get rid of us."

Two doors down, architecture students play beer pong. One of them takes a break to go to the men's bathroom and piss into a keg shell. On this day Willie Nelson the dog isn't here. Neither is well-known patron Crazy Dave.

Abby Henson says we don't need something new. "We need more of this," she says, surrounded by four wasted wooden walls etched near to dust with names and memories and vulgar remarks.

This sounds like a sarcastic remark, and it's not intended that way whatsoever, but what could possibly go in that location that would be more apt than the hole-in-the-wall bar that's already there? Sure, build a small strip mall or convenience store, but you're going to be catering to the same people whose bar you just took away.

If Fritzel is involved, the Crossing, Yello Sub, everything is DONE. He is the one of the main reasons that there are incredible rents and empty storefronts downtown and that dead souled suburban sprawl everywhere else (heard of the WalMart debate?). He will do anything to Lawrence for a dollar. And since he was at least 10,000 deep (spread out through different family and companies) into the last two new candidates onto the city commission, anything he wants will be rubber-stamped in a way that the previous owner could never have dreamed without the help of commissioners in his pocket.

Remember ChrisKnudsen to weigh you personal feelings about the people that go there against the thought of a Johnson County strip mall at the end of campus.

I realize walmart is Doug Compton's baby, but its the same shiz.

Whatever reason, I can imagine the Crossing trying to buy their own property and then it being like one of those "We need to save this so and so place because of our heritage" and all that nonsense but it wouldn't probably be that funny. I guess it would be cheaper if they just made it into a documentary and will probably be more interesting than any of that "Invisible Children" documentary. Maybe they can put both of the films together and call it "Invisible Children of the Crossing." I would totally download that film from a torrent and let it sit on my hard drive for 2 years before deleting it. Maybe I will come around to watching it once I get tired of watching "The Shawsank Redemption" on TNT. That probably won't happen though.

The only experiences I have had about the Crossing was whenever I drove past the bar on my moped, a bunch of BROs would hoot and scream at me like they wanted me to fall off my scooter. I remember one time I saw this car accident where a BRO had his skull cracked and blood covered his face, the BRO was crying. He was afraid that his parents were going to get pissed, his girlfriend was going to leave him, blah blah, let's play some BEER PONG!

I am all for them moving the YelloSub onto my dream rollarcoaster. YelloSub does make some good tastin'. I remember writing on an application for YelloSub that I promised not to spit in their food if I got the job. They never did call me back for the interview.

For sure they should get rid of that book store that has the sign of when a videogame gets a 5.0 from Gamepro. I am sure that place has no fans because who the hell reads Gamepro anymore anyways? And people who do read Gamepro, would they choose this bookstore over the likes of the other mighty fine bookstores already located all throughout Lawrence? If I read Gamepro, I wouldn't tell people about it. When I was in 7th grade, I like this girl named Shannon and I was pretty sure she liked me too. Then I had this conversation with my friend Ben about how our Nintendo Powers were late and Shannon overhead that conversation. Guess who never got laid by Shannon? Imagine if the conversation was about Gamepro. I probably would have never gotten laid by any girl that 7th grade year.

What will they have in the stripmall? If its not a rollarcoaster, then I can see everyone being gung ho for an arcade and if the arcade had The Simpsons Arcade game. Hell, if the Crossing got the Simpsons Arcade game I would do whatever I can to stop them from tearing the building down. Also, they need Revolution X and a Bucky O'Hare machine. Plus a Terminator 2 pinball and some freaking Pit-Fighter. I swear I am like the only person that liked that game.