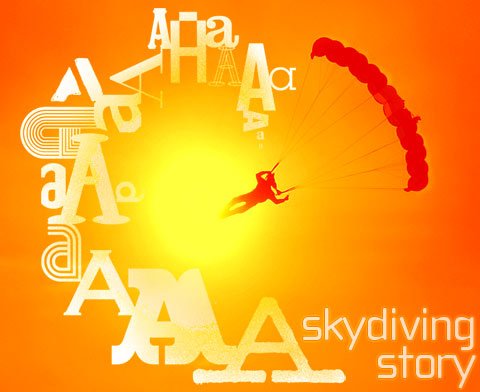 I have never been on a plane ride that didn't come with free orange juice and pretzels. I certainly haven't been on a plane like this-small, loud, with three crazy passengers packed in like pigs headed to the slaughterhouse along with the pilot and me.

When the Cessna 182 ascends to 10,000 feet, the pilot reaches across and swings open the door separating me from the sky. A swift rush of cold air blows in. Jeremy, Emily and Turk skip out onto a step under the wing.

The wind blows hard against their jumpsuits and then they are gone, fading momentarily into blue and red specks freefalling toward the fields below.

I'm not jumping today. An observational ride was all they could fit me in for. I'm fine with that.

Life in the hangar

Earlier in the morning, the radio is thumping and Turk Chapman, the man with the shaved head and the parachute tattoo on his calf, is singing along in the hangar in Osage City, a town 40 miles southwest of Lawrence.

Coffee is brewing and there's a box of donuts on a table. There are six couches in the hangar, a wall decorated with mounted bucks and a golf cart covered with skydiving bumper stickers proclaiming things like "skydive naked."

A couple of recent converts are playing catch with a ball. The place feels very lived in-a motley home to these people. Every year 2,500 skydives are made at this site, including nearly 400 by first-timers.

Chapman is in his seventh year skydiving. He's completed 744 jumps. He lives in Ottawa now, but for a while he lived in Osage City to be nearby. While waiting to jump this morning, he bounces around the hangar smoking a cigarette.

"This is like pure freedom to me," he says. "When I'm down here I don't think about work or bills or anything else."

Jen Sharp, who founded Skydive Kansas in 1995, is packing a reserve parachute. Sharp has completed close to 2,000 jumps and is certified as a "master" by the United States Parachute Association. During the week she works as an independent web designer and computer programmer.

When she talks about skydiving, it sounds almost religious, like it's a whole new way of life.

"Fear is an emotion that you can't control whether or not it happens to you," she says. "You can only control your reaction to it. If you have the higher brain function of being able to control yourself, basically, you can succeed at pretty much anything."

Jeremy Struemph is off finding a waiver. Struemph lives in a very clean suburban-style house in west Lawrence. He works for the KU Center for Research and his skydiving bio says, "Jeremy is a grant administrator and sits behind a desk all day. No wonder he needs some air!"

The dude must need a lot of it. Since 2005 Struemph has jumped out of an airplane more than 400 times. He goes out about every weekend when he's not coaching the KU crew team.

On June 14, starting around 6 a.m., he will attempt to set the state record for most jumps in a day with 53-the average number, according to Skydive Kansas, of acts of domestic violence committed each day against women and children in Kansas. The "Drop Abuse" attempt would land Struemph in the Kansas Sports Hall of Fame.

The worldwide 24-hour world record is held by Jay Stokes, a man who jumped out of a plane 640 times one day in the fall for his 50th birthday. Struemph isn't quite there yet, but 53 is a start.

Oh, and one for the Book of Huh?-"I'm not a big fan of heights," Struemph says.

Emily Reimer, who is packing a reserve parachute and complaining good-naturedly about the Skydive Kansas coffee pot, started skydiving last summer. Since then, she's found time-between studying architectural engineering at KU and throwing javelin and shot put on the track team-to become hooked.

"It's not that scary freefall feeling that you would expect-you know, that falling feeling you get in dreams that freaks you out, or when you're jumping off a diving board," she says. "You're not accelerating in the same sense. You feel like you're flying. When you start to learn to fly your own body, it's just an exhilarating feeling, but it's relaxing for me. When I've had a tough week, the first thing I want to do is jump out of an airplane."

In a corner of the hangar hangs a KU Skydiving Club T-shirt. Reimer started the group in the fall and plans to expand when a new crop of freshmen come in. She hopes that someday it will be as big as K-State's club, which has its own airplane and drop zone.

On June 14 Lawrence skydiver Jeremy Struemph will attempt 53 jumps, which would set a state record for most in one day. He's doing it to raise money for the Kansas Coalition Against Sexual and Domestic Violence.You can pledge money by calling Skydive Kansas at 785.840.JUMP or online at their Drop Abuse website: skydivekansas.com/dropabuse/The Kansas Coalition Against Sexual and Domestic Violence fielded 22,647 crisis hotline calls, served 20,187 victims and sheltered 3,550 in fiscal year 2006, according to kcsdv.org.

After the jump, pilot Ron Peters guides the plane to the ground, going through a series of spirals that make gravity seem to come and go.

"It's the most fun you can have with clothes on," he says.

I walk back to the hangar wearing the 25-pound parachute I didn't have to use. I sit on one of the couches and Chapman cues up the video he just took with his helmet camera. A piece of equipment says he fell at an average speed of 162 mph with a max of 185 mph.

He tells me I ought to do it next time. We'll see. It's a pretty damn high jump.