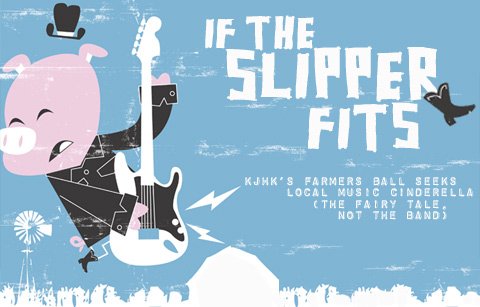 If one were looking for an abbreviated introduction to Lawrence's best new bands, KJHK's Farmer's Ball would be the ideal place to start. The competitive aspect of the annual battle-of-the-bands usually takes a backseat to the camaraderie, which is usually in full effect despite a wide breadth of musical styles. This year's crop features eight wet-behind-the-ears acts that will go toe-to-toe in preliminary bouts Thursday and Friday and seek a knockout blow at Saturday's finals at The Bottleneck. We harvested the freshest tracks from all eight ballers into a podcast preview of the 2007 Farmer's Ball.

If the slipper fits...

If one were looking for an abbreviated introduction to Lawrence's best new bands, KJHK's Farmer's Ball would be the ideal place to start. The competitive aspect of the annual battle-of-the-bands usually takes a backseat to the camaraderie, which is usually in full effect despite a wide breadth of musical styles. ...

No-fi version of the podcast

Les Somniferes are Lawrence's newest (only?) French-friendly act, weaving hints of baroque pop, cabaret and folk into their gentle compositions. The majority of the group's songs are half in French and half in English, as the three founding members -- Anissa Svenson, Rebecca Watts and Kathrine Bogart -- met while studying abroad in France. Upon their return to the mother country, the trio enlisted the help of Martinez Hillard and Jeff Milberger (also of The Jen Say Kwahs) and guitarist Derek Branham.

Local emcee Stik Figa (John Westbrook, Jr.) raps about what he knows, from humorous tales of a Topeka night club ("Lookin Good") to issues on identity and interracial relationships ("Let It Be"). Recently crewed up with InnateSounds and producer Miles Bonny, Figa enlisted Lawrence homeboy Johnny Quest to mix his debut album "The Skinny." He cites GZA's "Liquid Swords" as his desert-island disc, speaking volumes about his predilection towards smart and introspective hip-hop.

Blue(ish) preserves the tradition of Lawrence bands with weird names involving the color blue (a former Farmer's Ball band was named Blue, but you couldn't say it you had to point to something blue). The (ish) is the homespun project of Christopher M. Clark and friends, a venture into IDM headphone pop with subtle, absorbing beats and bits of folky acoustic guitar. Boards of Canada and MÃ¼m could both serve as reference points, but it's fair to say this (ish) is uniquely the sh*t.

Soundquist is Carl Sundquist, who makes instrumental music with a Tascam 8-track, keyboards, drum pads, effects pedals, washboards, bottles and whatever else he can tweak out on. Found noises collide with Aphex Twin/Autechre-style beats, creating darkly engrossing sound collages reminiscent of DJ Spooky.

Rusty Scott is a Midwest man with an acoustic guitar in his hand and a croon that could cross a state line or two. Keen lyrics like "Sometimes the whip is in my hand / Other times I'm getting beat by it" embellish rustic Americana folk melodies in the style of Ryan Adams or Andrew Bird, but Scott's seasoned songwriting likely draws from a much deeper pool of influences.

When will this podcast be posted?

Thanks for the info, Phil.

These bands sound great in real life, but it seems like you slowed the songs down for the podcast. Was that intentional? Because changing the tempo of a song can negatively alter the overall sound of the song which is most likely undesired by the artists.