Good: Smart puzzles, fantastic use of the wiimote

Bad: The occasional motion recognition problem, tough difficulty for a game that kids will probably be interested in

Thanks for being a developer whose name is not Nintendo that apparently grasps the concept of how to make a game for the Wii. You've made a game from the bottom-up specifically for the Wii console, with clever motion applications. You're the first third-party company I can think of that included these clever motion controls in something other than a hodgepodge collection of minigames.

Zack & Wiki almost plays like an homage to point-and-click adventure games, only with a very Wii twist to it. You'll guide Zack and his odd golden flying monkey around a variety of locations by simply pointing at the screen and pressing A. Doing almost anything else, however, involves motion. You'll shake and saw down trees, ring bells, pull levers, turn cranks, hammer, and countless other actions without even needing to press a button. It incorporates these controls virtually seamlessly, and they work perfectly about 95% of the time. The occasional snag pops up here and there, but never with enough of a frequency to disrupt the experience. 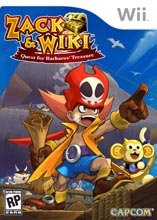 Virtually any enemy in the game can be turned into a tool to help you progress. Let's say you run into a snake. All you have to do is shake the wiimote to turn Wiki into a bell that attacks it. The snake then will turn into a "Slither Gripper", which you can use to grab out-of-reach objects. Frogs turn into bombs, Centipedes turn into "Centi-Saws", and everything else will prove useful as well. Each level turns into a test of observation as you scan the area and available enemies for ways to get to the treasure.

Considering the Wii's demographic, I'd have to imagine that a large amount of "casual" and younger gamers will pick up this game. They might not be prepared for the experience, however, as some of the puzzles are very difficult. I'm a 23 year-old who has played games for literally as long as I can remember, and I found myself scratching my head pretty frequently during some of the tougher brainteasers.

Zack & Wiki is very distinct visually, with its cel-shaded, cartoony graphics. It's filled with many friends and foes that animate well but feature annoying voice acting. There are no actual words spoken, just the random "Um hmm HMM!" and "Wowowwowow!!".

If you've ever been a fan of point-and-click adventure games, or puzzle-based games of any sort, you should definitely check out Zack & Wiki. If you're a parent just looking to buy the first Wii title you see with cartoon characters on the packaging, think twice before considering this as a Christmas gift. Your stupid kid probably won't be able to get past the first world.