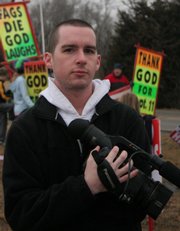 David Gnojek/Special to the Journal-World

K. Ryan Jones, a 2007 Kansas University grad, just sold his debut documentary, "Fall From Grace," to Showtime. The film will air in December.

It's Showtime for K. Ryan Jones.

The 2007 Kansas University grad has taken a documentary he made as a film school project and sold it to the Showtime network. Jones' "Fall From Grace" will air at 9 p.m. Dec. 4 on Sunflower Broadband Channel 421.

The incendiary movie takes an insider look at the members of the Westboro Baptist Church, led by Pastor Fred Phelps, who have gained international attention for their stance denouncing homosexuality. This has heated up recently thanks to their practice of picketing military funerals under the premise that God is punishing America for supporting gay rights.

"It was a low five-figure deal. But when I started the film, I never thought it would be anything that would be sold anyway. So to have it sold to Showtime was more about the credibility that comes with such a sale, as opposed to the financial gains," Jones says.

After "Fall From Grace" premiered this year at the South By Southwest Film Festival, Jones says he negotiated with a number of distributors, including Morgan Spurlock of "Super Size Me" fame. But Showtime took a more active interest when Jones revealed that ABC's "20/20" series would be airing clips of the movie during a John Stossel report on anger and rage in the U.S.

Jones was brought in as an expert witness by ABC. And although a greatly abridged version of the report aired last Friday, the experience proved useful to the filmmaker.

"My interview wasn't in there, but that didn't bother me so much. It was more about having the film on national TV for the first time and to publicize the Showtime date," he says.

Jones didn't have to re-edit the documentary for Showtime, other than replacing the musical score with one composed by Kip Haaheim, a professor in the KU music department. Showtime now has the broadcast rights to it for about a year and a half, and Netflix purchased the DVD rights for 12 years. As part of the agreement, neither can alter a frame of the controversial content.

"Between the Showtime deal and the Netflix deal, I've got enough money that I can move to New York in a couple weeks. I'll have enough that I can live comfortably there for a year without having to work," the 23-year-old Jones says.

He admits being attracted to New York by the fact that the documentary film community is considered very tightly knit.

"If I want to pursue documentary any further, that's the place to be. I just really was not keen about going out to L.A. at this point in my life. New York was more real; the people are more real. L.A. is kind of a fantasy land. I'll avoid that if I'm able to establish myself," he says.

As for his next project, Jones is ready to explore fresh subjects.

He says, "I pitched the idea to A&E of a documentary about the Macy's Christmas experience of Santaland and the parade - commercialism and all that junk. I'd been working on that for the past couple months. But Macy's is even harder to infiltrate than the Westboro Baptist Church."