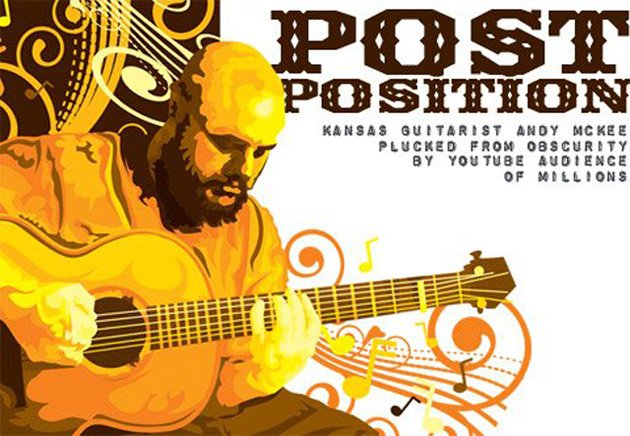 The Topeka guitarist had recorded a live-in-the-studio take of his original "Drifting," so he posted it.

McKee didn't have to wait long before that minor action became a career-changing event.

"By December, YouTube featured it on the front page. Man, I couldn't believe it. A solo, instrumental, acoustic guitar tune-who would have thought?" says McKee, who was making a living teaching guitar lessons.

"It went from 10,000 views to 100,000, then eventually it was up over 1 million. I was going, 'This is insane.' It's definitely going to change things. I think I'm going to be up onstage playing guitar a lot more, like I always wanted to."

Currently, McKee is calling from Ilfracombe, England, where he just got off the stage opening for Australian guitarist Tommy Emmanuel at the renowned Landmark Theatre. It's the second date in a three-week tour that takes him all over England and Scotland.

This newfound exposure can be attributed to YouTube, but the talent rests squarely in McKee's hands. The 28-year-old Topeka native has forged a distinctive style that proves eye-opening and ear-opening to many.

"I like to use unconventional techniques and altered tunings and come up with new sounds on the acoustic guitar. I get bored sometimes when I'm writing music, so some of the tunes I play over the top of the guitar neck with my left hand. Or I'll hit the guitar body for percussive sounds. I try to cover rhythm, harmony and melody all at the same time on the acoustic guitar," he says.

The simple videos McKee posted have netted more than 20 million hits on YouTube. At one point, "Drifting" knocked the late Johnny Cash from the top spot of highest-rated music video on the site. McKee has some 30,000 "friends" on his MySpace page.

The overwhelming traffic caught the attention of the mainstream media, and McKee was courted to perform on "Last Call with Carson Daly" and collaborate on Josh Groban's latest album, "Noel."

"I don't know if I'm YouTube's greatest (musical success story). But I can tell you that it definitely changed my life," McKee says. "I'm up there with the guy who did that 'Chocolate Rain' tune."

McKee began dabbling with the guitar when he was 13.

"One of the first pieces of music I bought was the tune 'Dust in the Wind' by Kansas. That was a huge influence on me wanting to get into fingerstyle guitar," he recalls.

The musician started to get more serious at the age of 16 after attending a clinic that acoustic master Preston Reed gave in Topeka.

"He was playing in altered tunings and hitting the guitar. It blew my mind. Prior to that I was primarily an electric guitar player. I was absolutely blown away by this type of music, and how you could cover all the elements of music with just one acoustic guitar," says McKee, who also cites Michael Hedges, Don Ross and Billy McLaughlin as acoustic inspirations.

That same year, McKee dropped out of Washburn Rural High School to take his shot at music. (He would later earn his GED.)

While eventually performing with bands such as Farm and Buzz Etiquette, McKee primarily supported himself by teaching private guitar lessons at Topeka's Steam Music.

"Everybody loved him. Great personality. Played his fingers off," says Don McKenzie, owner of Steam Music.

"He was certainly creative. He did a lot of percussion stuff with the guitar. Basically, he was a talented guy who practiced a lot and got really good, and he's had some fabulous results."

But by February, the buzz on McKee was reaching a point that was translating into real dollars.

"I started getting so many offers to perform that it didn't make any sense to keep teaching, so I decided to stop," he says.

Although he was touring with Grammy-winning bassist Michael Manring and opening for artists such as Victor Wooten at Lawrence's Granada, McKee was still basically an independent artist.

"I was contacted by Universal Records when this whole thing started to blow up. But what they were offering didn't make sense for me," he says.

Despite no deal with a major label, McKee has managed to release four CDs: "Nocturne," "Dreamcatcher," "Art of Motion" and his latest, "The Gates of Gnomeria."

"None of my music is really available in stores. But we sell it on iTunes and Amazon, and an independent label called Candyrat Records has it on candyrat.com," he explains.

Andy McKee taught guitar lessons in Topeka for 10 years before a YouTube video of him playing the acoustic guitar earned him international attention. Now the 28-year-old performer is touring Europe.

McKee says he plans on staying in Topeka ... for now.

"Getting out and traveling like I have, it's really cool to see these other places. I might end up moving out at some point. I really loved Canada," he admits.

If one were to judge McKee's success based on fan messages that accompany his YouTube postings, it's clear that the guitarist is approaching his career in the right way.

"There was one that said, 'Some guys play guitar; you play music.' That really stuck with me because for the last few years I've been trying to write really good music. I'm not so interested in being this really well-known guitar player because I think there are other guitar players that are way better than I am. If I can just write some great music, that's all I want to do."

Rock on Andy! You've been up over 1 million hits on 'Drifting' for quite some time now. Glad to see you get some local recognition. See you around!