In the same vein as Tony Hawk and Madden, it's definitely looking like gamers have another series with yearly incarnations popping up around the holiday season. You can't blame Activision, though, Guitar Hero is a bonafide gaming phenomenon, regardless of whether you're a casual or hardcore gamer. The question is, can this series avoid the "same game, different year" stigma that TH and Madden have earned?

I'd like to think that it can. Whereas the aforementioned games pretty much perfected their respective engines (skating, football) to a point that makes it hard to improve, Guitar Hero is a music game. Because of that simple fact, all we need is new songs to make it a new experience. Sure, you'll still be executing hammer-ons, pull-offs, and star power in the same fashion, but it's all about the setlist with Guitar Hero.

GHIII's setlist is arguably the best of the three (let's not even talk about Rocks the 80s), especially considering that the majority of the tracks are masters. No more will you have to listen to a terrible cover of "Killing in the Name", or a very un-Axl lead singer strain through "Sweet Child Of Mine". In Guitar Hero III, that's the genuine Zach de la Rocha on "Bulls on Parade" and W. Axl Rose singing "Welcome to the Jungle". Neversoft has even managed to pull off the impossible by getting Metallica's "One" on the setlist. 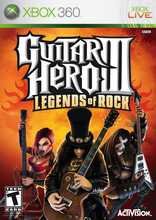 While it's a fantastic setlist, the career mode still falters on occasion. For one, I'm a bit annoyed at the fact that many of the songs can only be unlocked in co-op career. This would be understandable if you could progress through this via online play, but that isn't an option. One of the new, hyped features in III is the boss battle mode. This only happens a few times throughout the single player career mode, but it's not nearly as exciting as many hoped it would be. After beating the last song in the set, a legend of rock will challenge you to a showdown. Instead of star power, you earn attacks by hitting specific streaks of notes in a row. By tilting the guitar, you can increase your opponent's difficulty level, double the number of notes, and several other negative effects. It sounded intriguing until I played it, but I didn't have much of a desire to do it again afterwards.

I consider myself to be pretty good at Guitar Hero (but not good enough to beat Jordan on Expert in GHII), and I found myself having a tremendous amount of difficulty with this installment. It's not just on Expert, either. I found myself failing "One" and Slayer's "Raining Blood" multiple times even on Hard. Needless to say, there isn't going to be any complaints about the game being too easy. And if there are, politely point them towards Dragonforce's "Through the Fire and Flames" on Expert.

On top of the great setlist, Guitar Hero III also offers the first full-fledged online mode for the series. I was a bit worried about this, considering the slightest bit of lag could ruin this mode. I'm happy to say that I haven't seen lag of any significance at all since I started playing. The online mode can also be a very humbling experience if you think you're particularly good at the game. You'll quickly learn that some people are simply stupid good at playing fake guitar (the ending of the most recent South Park episode comes to mind).

When it comes down to it, you'll love the majority of Guitar Hero III if you've been a fan of the last two installments. If they weren't your type of game before, there's nothing that will change your mind with this one. Consider me in the former group.