Free State senior Quinn Brabender, pictured Wednesday in the Free State auditorium, has been selected as the October ArtStar for his work in film, theater and music. "I get bored at home," Brabender says, "so I just decide to pick up the camera and shoot something - whether I have a purpose in shooting it or not - and make a movie out of it."

October ArtStar man of many talents

Free State High School senior Quinn Brabender started making movies as a weekend hobby, but as a member of Firebird Productions he's gotten so good that students and staff specifically request his handiwork on film project. 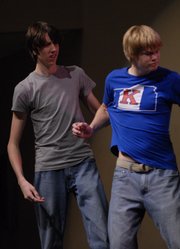 Quinn Brabender eats an entire bag of candy, chugs 12 bottles of Jones Soda and a cup of coffee, and passes out on his computer keyboard.

He wakes up 36 hours later, disoriented, in bed.

"What time is it?" he mumbles, checking his alarm clock.

"I'm wasting valuable experimentation time!" he shrieks, stumbling to his feet and rushing out of the room.

If this had really happened, Brabender might still be reeling from his sugar coma. But this is a scene from the Free State High School senior's short film "Sugar High Me," a hyperactive spoof of Morgan Spurlock's "Super Size Me."

What rings true, however, is Brabender's reaction to having spent a day and a half unconscious.

This guy doesn't like to waste that kind of time.

"I get bored at home," he says, "so I just decide to pick up the camera and shoot something - whether I have a purpose in shooting it or not - and make a movie out of it."

Over time, Brabender's creations have become more than just a hobby. As a member of Firebird Productions at Free State, he's part of a team that crafts sports highlights videos, Homecoming and prom flicks and - the project he's toiling on now - the annual Battle of the Bands documentary.

"People in the school really respect him," says Megan Spencer, who teaches film media at Free State. "They have personally asked to have Quinn make their videos because they know what a good job he does."

That's not all he's good at. Brabender also excels in the classroom, onstage and in the community as a volunteer. His efforts have earned him the title of ArtStar for the month of October.

Brabender, 17, became interested in making movies while taking a creative filmmaking class at Southwest Junior High School. The assignments were mostly short films with no dialogue.

"It was just always fun to be able to tell a story with pictures," he says.

It was also in junior high that he first tried choir and musical theater. He says he didn't have a lot of confidence in his voice, so he sat out of "West Side Story" as a sophomore at Free State, but he snagged roles in other plays. And when theater instructor Nancee Beilgard announced this year's musical would be "Urinetown," a contemporary satirical show, Brabender decided to throw his hat back into the ring.

He plays Officer Barrel who, along with his partner, Lockstock, strictly enforces the "pay-to-pee" policy of Urinetown.

"He has a great sense of comedic timing," Beilgard says. "He is one of our best actors."

Brabender carries that humor into many of his films. In "Unquenchable," for instance, a young man frantically searches the halls of Free State High School for a working water fountain, but they've all gone dry. He can't even coax a drip from the sinks in the men's restroom. That leaves him one option, and the screen goes black as he stares down the toilet.

"I'd like to think of myself as a funny guy," Brabender says.

He's not always clowning around, though. Through the Thespians Club, Brabender has served as a Salvation Army bell ringer and helped collect food for a local pantry with the Trick or Treat So Kids Can Eat program.

When he's not volunteering, rehearsing, editing the entertainment page for the school newspaper or studying to maintain his straight-A status, Brabender spends upward of 10 hours a week in the Firebird Productions studio. That time commitment increases each February, when Free State plays host to the En Fuego Film Festival, which showcases movies by high school students across the state.

Brabender plans to enter a few of his own films in the festival this year. He also has posted a handful of projects on YouTube. He's eager for feedback on his endeavors, which he'd like to spin into a career. He plans to major in film next year at Kansas University and says he admires Lawrence filmmaker and KU instructor Kevin Willmott's indie approach to the art form.

"I'm not really a big fan of the whole West Coast/East Coast film scene," Brabender says. "I don't want to be a big producer, a big director or anything. I really want to focus on indie films and stuff like that.

"I think being able to start it here in the Midwest where the film scene is really small right now and trying to help that grow would be really cool."

Megan Spencer has no doubt that Brabender will make his mark in the industry.

"I see a good career ahead of him," she says. "I look forward to knowing the filmmaker that he's going to be in about five more years."

ArtStar: About the program

Nine monthly winners (September-May) will be selected via nomination by fine arts teachers and featured in the Journal-World and on 6News. An overall winner will be chosen from among those and designated ArtStar of the Year. The annual award will come with a scholarship.

In addition, nominations will be taken for promising students outside the senior class for up to two honorable mention spots each month.