Infinity Ward has taken a bold move by moving their prized series from the overcrowded World War II field and setting their new epic in the modern day. After the mixed reaction of Treyarch's COD3, it's good to have the COD2 team back onboard, and the difference is more than noticeable. COD4 is perhaps the most intense first-person shooter I've ever experienced, and boasts one of the deepest and most rewarding multiplayer experiences on the current generation of consoles.

Most gamers main complaint (and the only significant complaint I have) will be regarding the length of the single player campaign. On the normal difficulty, it'll be easy to blaze through the missions in 5 to 6 hours. It's not necessarily easy, just short. Despite how brief the experience is, it's balls-to-the-wall intense the entire time. For the first time in a long time, I can say I was literally on the edge of my seat during certain segments. 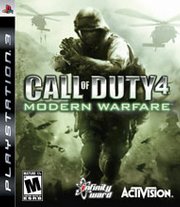 Missions offer a ton of variety, even when compared to Call of Duty 2. The bland tank missions from the previous games have been replaced with a fantastic level that places you in the role of a gunner on a heavily-armed aircraft. It's shown in the black-and-white thermal vision that we've become so accustomed to seeing on the news, and it's almost eerily realistic. You'll wait for enemy combatants to exit a mosque and head to their cars before you rain down death from above. Everything from the presentation to the radio chatter feels 100% authentic.

Perhaps my favorite mission in the game places you and your captain in the ghillie suits that snipers wear. This entire mission can be completed without alerting a single guard, and it's much easier if you do it this way. After a long series of staying hidden from the enemy in some increasingly clever ways, you get to take out a high-profile target from long range in a tense sniper situation. Missions like these are great for changing the mood after a particularly intense run-and-gun section.

It's a wild ride and it ends quick, but it's pure quality from its start to excellent finish. Like Halo 3, however, the real value in this game lies in the robust multiplayer. Infinity Ward has opted not to include any multiplayer achievements for the Xbox 360 version, and has instead implemented a fantastic "perks" element to all of the console (and PC) versions. Experience points are gained in various fashions, from standard kills to flag captures to defending your headquarters. As you level up, more weapons become available to you. Each individual weapon has its own set of challenges that when accomplished, add different accessories. Use your favorite assault gun long enough and you'll soon have a red laser sight, grip, or scope to add on. Challenges also come in various other forms, such as getting kills while prone, shooting down enemy helicopters, or scoring grenade kills. Finishing any of these challenges will also reward you with extra XP.

At no point did I see the framerate drop below what appeared to be 60 frames per second. It's smooth even during the most hectic firefights. You could have 10 enemy combatants shooting machine guns and rockets at you while helicopters are crashing out of the sky, and you won't see a single hiccup in the onscreen action. The game does nothing to draw you out of the experience, and the fantastic sound and voice acting helps even more.

It's very difficult to find fault in this masterpiece. It may be short, and it may not offer split-screen online support, but I consider this to be the most polished first-person shooter I've ever played. Yes, it's better than Halo 3. Yes, it's better than the Half-Life games. It really is that good. The bar has just been raised.