Bad: Doesn't take much to technically "beat" the game

Almost a year into the Wii's lifespan, we now have the big gun for the system. Sure, everyone loved Wii Sports, Zelda was a classic, and Metroid made good on Nintendo's control promises, but a Nintendo system isn't a Nintendo system until we have a proper appearance from a certain rotund plumber. Some people might even argue that we haven't seen a true Mario game since 1996's Super Mario 64 (not me:I was one of the few that loved Sunshine). Regardless of your feelings on his Gamecube adventure, it's tough to find fault with Super Mario Galaxy, Nintendo's newest masterpiece.

It's too fresh in my memory to properly rank it amongst the rest of Mario's classic titles, but I can confidently place it somewhere in the top three. One thing Galaxy does so well is re-introduce classic elements of previous games. Within five minutes of booting up the disc, you'll be greeted with the ominous appearance (and classic music) of Bowser's airships from Super Mario Bros. 3. If you're a longtime gamer and you don't feel an immense wave of nostalgia when this happens, you have no soul.

You'll also run into such classic enemies as Bloopers, Goombas, Monty Moles, Pokeys, Thwomps, and Wigglers. As I encountered all of these foes from Mario's past, I realized that maybe that's one of the reasons Sunshine didn't go over so well with many people it didn't feel like it was Mario's world. Sure, Bowser and a few Toads were around, but there were far too many tropical environments and a general lack of nostalgia. 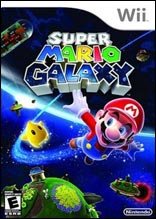 I don't want to put off the impression that SMG is simply pandering to 20-somethings that grew up with the NES, however. It has a lot of throwback music and enemies, but it's all wrapped up in a completely new package. The space setting and gravity-based levels are a fantastic twist on Mario's platforming nature. Simply exploring the levels and messing around with the smaller planets' gravitational pulls is a blast, and you can even launch yourself into a bit of an infinite orbit around these if you jump correctly.

It's actually somewhat surprising that all of these elements came together in a way that is intuitive and not annoying in the least. There were so many things that could have potentially gone wrong with a game like this. It could have been hard to control Mario as he goes upside-down on the spherical levels. It has an auto-camera that could have malfunctioned and caused you to miss important jumps. It could have relied too heavily on motion control. Luckily, the team at Nintendo is apparently talented enough to make sure none of these are issues with Galaxy.

All of the levels are separated in a similar fashion as SM64 and Sunshine. There's an outer "hub" world (the castle in 64, Delfino Plaza in Sunshine), and several smaller worlds to travel to in an effort to collect stars. Unlike the previous games, however, each smaller world doesn't always contain eight stars. Some only have three or four, while the bigger ones may have seven or eight. There are numerous one-off galaxies that almost feel like minigames. One features you balancing on a ball and controlling its movement by holding the Wiimote like a joystick and tilting it. Another is a giant floating water galaxy that you surf a manta ray through.

When I first saw video of Galaxy, I was worried that most of your time would be spent flying between small "planetoids" and not on the large, fun-to-explore worlds like those in SM64. Thankfully, this isn't the case. While there is the occasional "space junk" galaxy, there are plenty of large worlds that you can spend a lot of time exploring. The sheer variety of the environments is fantastic.

Controlling Mario should feel familiar to anyone who has played his 3D adventures. The classic triple-jump and cartwheel backflip are back, along with a couple new abilities. Shaking the Wii remote will cause Mario to execute a spin attack, which can be used to take out enemies as well as travel between planets via special star portals. He can also collect items that will allow him to morph into fire, ice, rainbow, bee, spring, and Boo forms. Every single one of these is useful as well as fun, with my personal favorite being Ice Mario. It turns him into a transparent block of ice and allows him to ice-skate over water, turning all of the water he touches into frozen platforms. While in this form, it's possible to wall-jump up adjacent waterfalls as well as perform a sort of pirouette jump. There were several times that I just ignored my objectives so I could skate and jump all over bodies of water. Boo Mario is also great, but you only get to play as him a few times.

Without a shadow of a doubt, this is the best Mario has ever looked. The character model himself is fantastic and detailed, and all of the worlds are vibrant and interesting. It's obviously not HD, but it does a great job of proving that the Wii is more than capable of some visually-appealing graphics. All of the great Mario sound effects and voices are back in full-force, and Galaxy features the best soundtrack in the entire series (and that's definitely saying something).

This is the perfect game for the Wii. It's simple enough for the casual Wii Sports crowd to pick up and play, while simultaneously being challenging and deep enough for a hardcore gamer to spend 20+ hours on in an effort to get all 120 stars. During the same sitting that I collected my 120th star, I started another file so I could experience it all over again. It doesn't matter if you're an 8 year-old who's new to games or a 30 year-old who used to play the Super Mario Bros. arcade cabinet at the local pizza place. This is how videogames are supposed to be.