As a lifelong Indiana Jones fan, I've always wanted a videogame that properly emulated the experience of being the adventurer himself. The actual licensed games were mediocre at best (although I played Last Crusade on the NES way more than I should have), and other games in the "adventuring" genre (Tomb Raider) never satisfied. Thankfully, Uncharted is easily the closest I've felt to controlling Harrison Ford as he searched the globe for untold treasures.

One of the first things you'll notice is the top-notch production value. Naughty Dog did a fantastic job of making the entire game feel like a Hollywood action movie from beginning to end. Everything from the voice acting to the camera angles to the lack of an annoying HUD lends itself towards a fully immersive experience.

You control adventurer Nathan Drake as he travels in search of a legendary treasure that his ancestor wrote about. You'll be accompanied at times by Elena, a woman working on a documentary, and your partner "Sully". The narrative itself isn't anything special, but the way it's presented is fantastic. One moment in particular will give you Raiders of the Lost Ark flashbacks, when Drake finds a treasure only to be immediately confronted with rival adventurers. 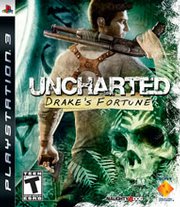 The interesting thing about the gameplay is that it doesn't really introduce anything specifically new to action/adventure controls. There's no re-inventing of the wheel here, just general shooting and platforming that you've been used to for years. Gunplay is decent in Uncharted, but jumping around and exploring various ledges and cliffs was my favorite part. You'll get the occasional Sixaxis implementation, but these moments are few and far between.

With gunplay being the weakest part of the game, I did get a little tired of the frequent firefights. Enemy A.I. is pretty weak and doesn't take cover well at all, but you'll still die frequently. These foes will grow in numbers and difficulty as the game progresses, and you'll encounter a completely new type of enemy near the end.

I'd compare Uncharted to a movie like Big Trouble in Little China. That movie was by no means a "groundbreaking" or "brilliant" piece of film history, but it was a hell of a lot of fun the whole way through. Likewise, Uncharted doesn't introduce anything revolutionary or brilliant that hasn't been seen before in gaming, but what is there is solid. And most importantly, it's a blast from beginning to end.

Sony fanboys are understandably thrilled about this game, because it's honestly one of those titles that will give you pause when debating whether or not the 360 could handle it. Everything from facial features to textures to the unbelievable-looking water is beautiful in high-definition. I can't think of another game I've ever played on a console that was this close to photo-realistic. The trees cast lifelike shadows, Nathan's shirt wrinkles slightly as he walks, and anything involving water is fantastic. The visual aspect of Uncharted combined with the stellar sound effects and music makes it one of the best audio/visual presentations seen yet on a home console.

Uncharted is a short experience, but it's almost completely free of any kind of fetch quests or backtracking. It also features a great rewards system that is almost similar to Xbox 360's achievements. The game is a fantastic rental based on the length, but it also features enough replay value and overall quality to warrant a purchase.