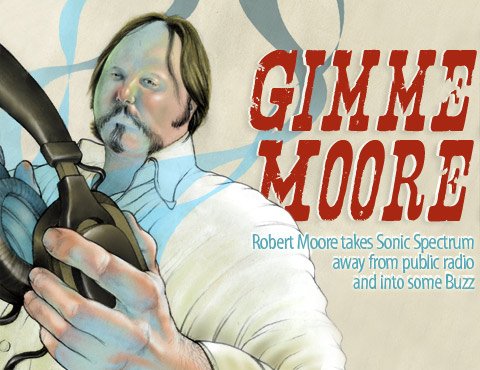 After four plus years navigating the left side of the dial with knowledge honed with years at record labels and in radio, Moore decided it was time for a change.

Tired of going it alone, he thought it may have been the end to his live broadcast, which incorporated an impressive range of current independent music and influential gems of the past. Sonic Spectrum was part of a rare club of free-form radio music programs-the anti-corporate antidote to Top-40 fatigue.

So in a move nearly as surprising (and quick) as his departure, Moore's show has been brought new life-not by another non-profit, but by the much-maligned and Entercom-owned KRBZ. Yep, 96.5 The Buzz. Who knew?

On a rainy day in KC, Moore sat with us over lunch at the Brick to talk about what's behind the change in call letters, about his label (Oxblood Records) and about the local music scene.

Robert Moore, longtime host of Kansas City's Sonic Spectrum radio show on KCUR, surprised and saddened listeners earlier this summer when he announced he was leaving the NPR affiliate and taking his show with him. After four plus years navigating the left side of the dial with knowledge honed with ...

lawrence.com: What was a favorite moment at KCUR?

Moore: Charlie Louvin was amazing. The guy that met Johnny Cash when Cash was a teenager, and went to Hank Williams' funeral. He saw it all-from country music at the beginning. I got to take him to Wal-Mart when he was in town to pick up his heart prescription, and sat with him for an hour and talked about Hank Williams' funeral. It was intense.

What was the chain of events that led you to leave KCUR?

In the last year of the show I became pretty complacent and was kind of more 'I better get this done' rather than 'I'm enjoying this'. The show was more routine, and things at the station had changed a bit-leaning more and more towards, obviously, news and talk station, which they are, but music was pretty much an afterthought. It kind of wore on me being music director after a while, not really getting any recognition or, literally, thanks for what we did musically.

Softee / Sonic Spectrum with Robert Moore (on the patio)

What do you think the role of public radio should be in regards to music, whether local or national?

There's a difference between public radio and community radio. Community radio more supports the community than public radio. Something like [KCUR] is left-of-the-dial style, stuff you're not going to hear on commercial radio, or corporate labels. Stuff that reflects the public radio audience, which is a diverse audience. Diverse in age, race, gender-to somehow represent as many of your listeners as you can. It's a completely different demographic than commercial radio.

It seems KCUR should be going for all sorts of ages-but it doesn't feel they are really trying.

News and talk is their bread and butter. The more you go with national talk and news-which they are great at what they do-there's also an uppityness to it. You're not going to get younger listeners turned onto that kind of stuff. I thought through shows like mine and This American Life we might bring in younger listeners. I don't know how hard they really want to do that. If you are based on fundraising and money, who is going to give you the most money?

Exactly. It's so nice to not have to do fundraising. This is the first time in 12 years I haven't had to beg for money. I'm happy about that.

Maybe this is sort of a predictable comparison, but your voice reminds me of Bob Boilen's from NPR's All Songs Considered. I imagine in my head this NPR school of buttery baritone.

Really? I'm told by some of the young Buzz listeners that I'm boring, so I need to liven up my voice apparently. It comes from being in public radio for a long time. There's a different style of announcing in public radio than anywhere else.

I guess when you're used to Dick Dale and Lazlo and Afentra: it's just different.

I hope I'm different than that. I come from the old school. I grew up with K-Rock in LA in the late '70s and early '80s : It's a different world now. I'm not slamming The Buzz at all, it's just the way things are. They are really taking a risk bringing a show like mine in-commercial radio just doesn't do that. It's great they are willing to do that.

It was a surprise move. I don't know where else you would go, necessarily.

I didn't plan on going anywhere, it just kind of happened. Greg Bergen, the program director there, says he's been a fan of my show for some time, and Jason, DJ at midday: they have been great. They have been so warm and receptive. I'm loving being at The Buzz right now. I haven't felt this respected in a long time. I really hope it works out and the listeners take to it: It feels like a new show.

I find it interesting that people are commenting on your voice because it's not like you don't talk on the show, but you keep it to a minimum.

I try to. It's about the music, not about me. Who cares who the host is?

The podcast features music by KC band American Catastrophe as well as a new song off of Ghosty's upcoming January release on Oxblood Records.

Wow, maybe this will compel at least some of those idiot listeners of the Buzz to branch out into less-derivative territory.

I think it's a good move.

(disclosure: I listen to 96.5 with moderate frequency)

KRBZ isn't owned by Clear Channel, it's owned by Entercom. My bad.