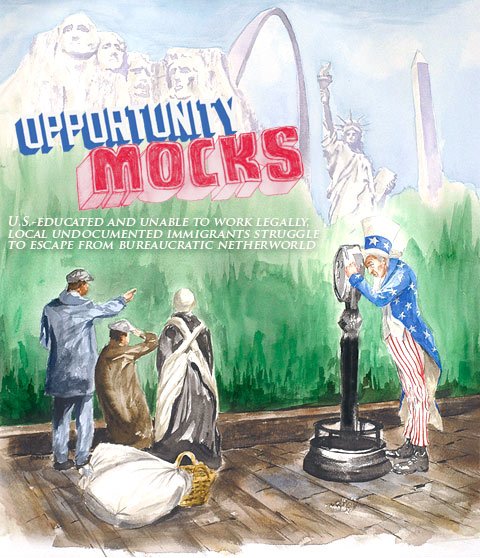 For this KU junior from Olathe-who asked not to be identified because of her immigration status-the fact that some Kansas legislators want her to return "home" rather than go to a state university doesn't make sense.

"I would be completely alienated if I moved to Mexico," she says.

She is one of eight undocumented immigrants who receive in-state tuition at KU. In many ways, she finds herself caught in a web of the government's making. After receiving her K-12 education in the United States-as all immigrants are eligible to do under federal law-she is now two years toward a health information management degree that she hopes will lead to a productive, well-paying job.

The question is, what happens after she graduates? It would be illegal to hire her. And while leaving for Mexico isn't a viable option, finding work in the United States will be difficult. Basically, she'll be praying somebody breaks the rules for her.

"My goal is to be able to live here without that (immigration) obstacle every time I want to get a job, when I want to have my license, when I want to go to college," she says. "It's a thorn in my side. I wish I could just pull it out."

A matter of choice

Roberto, a KU junior from Overland Park studying marketing, says his beef with people who say he shouldn't get in-state tuition is that he didn't choose to come to the United States. His parents did.

Roberto-who also asked not to be identified because of his immigration status-was brought across the border at the age of 12 when his family's retail food equipment business collapsed under inflation.

"I was brought here when I was little," he explains. "I didn't have an opportunity-it was just a decision my family took."

This notion of choice is at the root of the debate about whether undocumented immigrants should receive in-state tuition as well as other government benefits.

In general, the difference between an undocumented immigrant's need for food, shelter, and comfort and the same needs of U.S.-born citizens is that, unlike citizens, they made the choice to cross into the United States illegally. And the government, say those who oppose doling out benefits, should not be forced to accommodate for that illegal choice.

But the issue gets complicated when children are involved. The Supreme Court ruled in 1982 that undocumented immigrants have the right to a K-12 education because they didn't choose to enter the country.

The DREAM Act, a federal bill that would create an easier path for these students to become citizens, also acknowledges this lack of choice.

"You're having 65,000 kids a year graduate from school without status that people are figuring out how to address," says Ann Morse, director of the Immigration Policy Project of the National Conference of State Legislatures in Washington, D.C.

Kansas is one of 10 states to pass laws in recent years offering in-state tuition to undocumented immigrants. In Kansas, students are eligible if they attended a state high school for three years, graduated, and are seeking or promise to seek citizenship.

Supporters say a college education makes students better prepared to join the U.S. work force when they eventually become citizens. But under the country's painfully slow immigration process, the chances of becoming a citizen before graduation are slim-to-none for many students.

The KU student from Olathe says her family has applied for citizenship through the sponsorship of her aunt, who is a citizen. But she doesn't hold out much hope that this will happen before she graduates.

Roberto hasn't applied to become a citizen. He says he would like to, but he fears deportation if he joins the system.

"Once you do that," he says, "either you are accepted, but if not you basically are out."

The end result is that the U.S. educational system is churning out increasing numbers of highly-educated, English-speaking, Americanized, undocumented immigrants who are not allowed to work in the country.

"In the states that have gone ahead and (passed in-state tuition laws)-Texas may have been the first-the crop of kids now is graduating from college, and now they can't get work because they're still not legal," Morse says. "It's quite the dilemma."

Yet the number of undocumented immigrants in Kansas colleges remains minuscule compared to the total number of students. Last year, 169 were enrolled and the vast majority, 130, attended community colleges.

A person's opinion on the issue essentially depends on whether one views the students more as future citizens or more as illegal residents.

"The folks under this bill who are attending Kansas universities and community colleges are gonna be citizens at some point in time," says state Rep. Paul Davis, D-Lawrence. "I don't think that we are giving those folks any kind of false hope. We're giving them the keys for opportunity. I don't understand why we would not want to do that."

Immigrant high school graduates for years have faced the dilemma of not being able to legally work in the country, but that doesn't mean they shouldn't get an education, Davis says. He sees college as an extension of that.

"State universities are public institutions just like K-12 schools are," he says. "We ought to have consistent policies, with regards to who is entitled to an education, between the two of them."

House Speaker Melvin Neufeld, R-Ingalls, on the other hand, doesn't buy the notion that the immigrants are all on their way to becoming citizens, and sees a college education as preparing undocumented immigrants for a system they can't take part in.

"If they were actually becoming legal, then that would be a different story," he says. "And that would actually have something to do with improving our workforce. But under the status quo, all we're doing is holding out false hopes."

While Neufeld criticizes federal authorities for doing a poor job of processing the paperwork that would lead to the students' citizenship, he advocates a tough, simple solution: If you're not a legal resident, leave the country.

As for people who were brought into the country at a young age, like the student from Olathe, he says their families bear the blame.

"If they came over at 2 years of age, why didn't their parents fill out the paperwork and give them 10 years to get a chance to get their papers in order?" he says. "It's not happening. It's all about following the law. 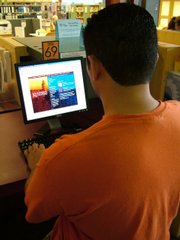 "I don't have any objection to spending state dollars to educate people that are legally in Kansas and legally can work in Kansas. But I think the citizens of Kansas have a fairly substantial objection to raising tuition on Kansas kids so that people that have broken the law and cannot be employed in Kansas get a low-priced education."

The in-state tuition law has been sharply criticized by immigration hardliners since its passage three years ago, and it may be at its most vulnerable in the upcoming legislative session.

In light of the federal government's impotence to come up with a comprehensive immigration solution, the Kansas Legislature will likely join other states around the country in taking a hard look at illegal immigration.

This year, state legislatures have introduced 2 1/2 times the number of immigrant-related bills introduced in 2006, according to the National Conference of State Legislatures.

One thing that will surely be discussed in Kansas is the more universally popular issue of enacting harsher penalties for employers of undocumented immigrants. And while efforts to repeal the in-state tuition law have failed in the past, Neufeld says this year a repeal could pass if tacked onto another such bill.

"If it's part of a bill that has a number of other things people want to support coming out of committee," he says, "it probably has a chance."

In the meantime, Roberto plans to earn his marketing degree by 2009. And the Olathe resident hopes to graduate from KU Med in 2010.

After that, the Olathe resident says, her best hope is to get a work visa sponsored by her new employer. Otherwise, she-and Roberto likewise-will hope someone looks the other way under the "citizenship" section of employment forms. Those are their options.

For now, though, they don't have to think about it. They're focused on college.

I am surprised no one has posted a comment on this. This is a very touchy subject for many people. Get outside of Lawrence, and there is a great deal of angst about "illegal" immigrants and the resources they are "taking."

Personally, I have to admire anyone who risks so much to have a better life for themselves and their children. I wish more parents and families who are citizens could think in such terms. I am glad to see people take advantage of the resources this great nation has to offer, regardless of origin AND succeed. The only crime here is that our government has not come up with an expeditious way to process papers and permit people to move on, integrate and contribute.

I am engaged to be married to a Canadian, and so far, their immigration process is pretty clear. They even have stats on how rapidly they process applications. However, I don't know how well they process papers for "illegals."

On another note about "illegals," that is different than this particular subject. I continue to wonder why no one in our media has covered why we have so many low paid immigrants doing jobs that "Americans won't do." The problem is that everyone wants to buy goods and services as cheaply as possible, and few consider how that contributes to wages that cannot sustain a family, much less acquire the "American Dream." I never hear how much profit is made when companies bemoan that they must pay low wages. Profit is never balanced with the good of society when the discussion is made. I know that most people KNOW when they are purchasing products at the lowest prices that they are NOT supporting an economy that considers people an asset. But the nation continues to shop for the lowest prices to fill their homes and closets with crap they will throw out in a year or less.

And even out of this low wage economy, the relegation of immigrants to the lowest paid jobs and consumer driven oppression, here are two stories of success.

I wish the best of luck to both the unidentified young woman and Roberto. And in case no one has ever said it-"Welcome to the United States!"

Thank you, Frank, for referring to our nation as the United States. So many don't realize that America is an entire hemisphere comprised of two continents, North and South America.