Myself. I make the majority of all my clothes to stick it to the man. (Bob, a customer/friend nearby chimes in: You're like the punkest hippie ever, man.) And I don't like spending money. I also go to Creation Station, Third Planet and Persephone's Journey for body jewelry, incense, and herbs, especially sage.

I go shopping once, maybe twice a month. I probably spend 50 cents per month, I don't know. I can't remember the last time I spent money on my look. 50 cents on patchouli. (Laughs.)

Uh-oh. Whatever I pulled out of the closet in my VW bus and rolled to work. And that about sums it up. Whatever heady dank trades I made on tour, man. (Laughs.) Bob: priceless. If only I had my djembe here. (Laughs.)

I don't really care what it says to other people. I don't know, Bob, what does it say to you? Bob: It says you're friendly, you like to smoke things, and you probably grow things:man. (Laughs.)

How early do you get up? How much time do you spend getting ready? 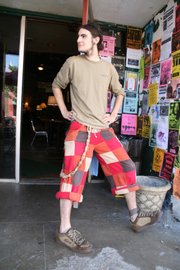 Lower enrollments in fraternities and sororities-that's definitely my favorite trend-and it's true! Bob: That makes everyone happy, except for The Sandbar. Are high heels with pants still a trend? 'Cause I hate that. Bob: I like that. And Ugg boots, they were ugly 15 years ago and they're still ugly now! Bob: And Crocs. Yeah, I don't care for those bright colored Crocs.

Where do you get your hair cut?

I haven't gotten my hair cut in 3 years. The last time was when Jamil shaved it. It was summer and my long hair was killing me in Kansas. Bob: I suddenly feel like it's Southern California right now. Surf's up, dude.

I have four tattoos and my ears are gauged to 9/16ths at the moment. After I was vegetarian for five years I got 5 bands on my ankle. The three dots are for fins, feathers, and hooves-'cause they're my friends. I got that tattoo at Irezumi in Kansas City. I designed the tattoo on my back: It's a peace sign and in each section there's different stuff: one section has a Grateful Dead bolt, another has a sun going over clouds, then a yin yang, and a rosebud in the final section for a family friend who died.

Henry's. Because we have the best coffee in town and the baristas are pleasurable company. And Bob's here. Bob: When am I not here?

The Gaslight or The Replay because those are the only two bars where the freaks hang out - wait change that to weirdos. Freaks have a negative connotation or now when you say "freaks" people think you're talking about goth kids. I don't dislike goth kids, but change that to "weirdos."

Is there anything you'd like to see more of in Lawrence? Less of?

More hippies in Lawrence! Where did they all go? Bob: Like we need more hippies in Lawrence! I'd like to see less sorority girls in SUVs talking on their cell phones about to hit you. Bob: way to be sexist, man. They almost hit you at the crosswalk and then they yell at you. Big Tri Delt sticker in the back window. Shit, everyone's going to think I hate girls. I feel like I should say something serious here: I'd like to see more free love and green energy, man. (Laughs.)

Tell us a secret:

If I told you a secret, it wouldn't be a secret anymore. Bob: What about your bus' name? My bus' name is actually McGill, she calls herself Will, but everyone knows her as Nancy.