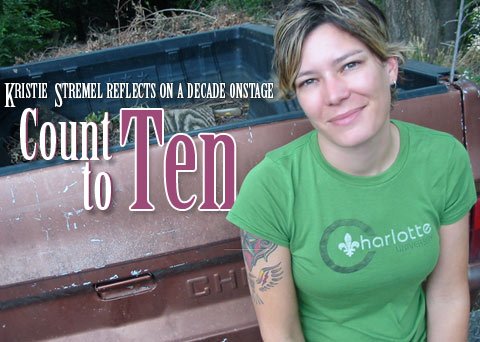 Kristie Stremel's post-secondary education was carried out in barrooms across the country as the touring guitarist for Frogpond. She spent two rollercoaster years with that major-label outfit before founding Exit 159 in 1997 and developing her own songwriting voice: a muscular country-rock amalgam of Joan Jett, Lucinda Williams, Paul Westerberg and The Pretenders. This year, Stremel released "10 Years"-a 14-song retrospective that includes two new songs and re-juiced versions of five tunes from her deep catalog. The album's self-effacing lyrics unveil a singer intent on sharing her journey with the world, so it's no surprise that Stremel was equally candid under our podcast spotlight.

Kristie Stremel's post-secondary education was carried out in barrooms across the country as the touring guitarist for Frogpond. She spent two rollercoaster years with that major-label outfit before founding Exit 159 in 1997 and developing her own songwriting voice: a muscular country-rock amalgam of Joan Jett, Lucinda Williams, Paul Westerberg ...

lawrence.com: So "10 Years" is a summary of 10 years of recordings?

Stremel: It's a compilation of a lot of songs I've written over the years. I woke up one day and realized, "My God-I've been playing music for over 10 years now." I'm still doing it, whereas a lot of people got married and had kids. I'm playing shows and I'm waking up and my neck hurts. I'm like, "Oh yeah, I'm getting older, that's right."

It's on Stremeltone Records, which I'm guessing is your own thing?

Yeah, just my own, and you know what that means-it's a telephone and a fax machine.

And a fax machine?

There's a reference to Paul Westerberg on the song "Have It All":

That's my man. I think I ripped the whole song off of Paul Westerberg-all his little tricks and stuff. That was my little nod to one of my favorite songwriters.

Who else is in your Top Five?

I like the classic stuff still, like Tom Petty and Joan Jett and The Pretenders-people who got out there and kept rocking. There's a lot of new stuff out that I like-independent singer/songwriters that I've met while traveling, like Nini Camps out of New York.

I'm guessing that the address in your song "4 South East" has some significance to you.

Care to expound on that a bit?

I hate to call it this, but it was kind of my stalker song. You know-the whole breakup, and you just kind of want to know what they're doing. I was thinking about that apartment that we lived in and all the good and bad times that happened there. I always joke onstage that it's my stalker song, but there was really no restraining order or anything like that.

I'm kind of proud of that song. I think we put it together really well. My producer is Lou Whitney in Springfield, Mo., and he's done a lot of great work. He used to play in a band called The Skeletons and he's recorded everybody that's trampled around Missouri.

What does "producer" mean to you? How does that work?

That was always a touchy area that I didn't understand in the beginning. In Frogpond, we had Art Alexakis from Everclear produce our record "Count to 10," and I never really knew what that meant. He came in and helped craft the songs. Since I was just a player in Frogpond it didn't really concern me too much. But when I started playing my own music and people wanted to put their little paws on it, it was a struggle to give that to them and listen. But Lou made it really easy and he wasn't going to take anything away from the song that I really wanted.

Where did the song "Paper Dolls" come from?

A lot of people know I drank a lot in Frogpond and Exit 159. Shortly afterwards, I started getting clean. That was a song about the struggle of it and all the relationships that I'd been in: My paper heart loves paper dolls. When you're not feeling good inside and you're not liking yourself, there's no possible way you can like someone else and give them anything.

I like "10 Years" because the songs that I picked out and the new songs I wrote for it feel real honest-I didn't hold back. To me, that's what makes a good songwriter: putting it out there and not being scared of what people think about you. Maybe that song helped somebody else get clean or even just think about it.

Was there any moment that got you over the hump? Anything you can recall as a turning point?

I was really sick and tired of being sick and tired, especially out on the road just feeling like shit all the time. I think everybody kind of bottoms out with whatever kind of stuff they're dealing with, whether it's alcohol or drugs. I think I'd just had enough and I had a lot of people help me get clean. It was shortly after that I realized that I didn't need people to clap for me anymore. I played shows because that's what I did; because the powers that be gave me a gift, and I think everybody should use their gift. I was finally playing shows for myself, and that felt really good.