Good: Brilliant use of the DS hardware, excellent boss fights and dungeons

I think I used up all of my pre-release Zelda hype a year ago before Twilight Princess, because I had almost completely forgotten about Phantom Hourglass by the time it arrived in the mail. Now that I've completed it, I'm glad I didn't know how great it was going to be until now. It would have made the wait unbearable.

Yes, Phantom Hourglass is an excellent game, and arguably the best in the already-stellar DS library. You'll control every aspect of the game via your stylus, which will probably make many skeptical at first. All of your worries will be completely washed away within 15 minutes, however, when you see just how well the system works. You simply drag the stylus around the screen in the direction you want Link to travel. Hold it near him to make him walk slow, or far away for a sprint. Sword slashes can be performed either with a swipe motion or a simple tap of the enemy you wish to attack. Link's trusty spin attack is back as well, performed with a simple circle motion around his body. 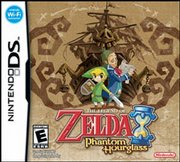 Each item features its own stylus command as well. Prior to throwing your boomerang, you'll trace the path you want it to take. Shooting arrows and throwing bombs is controlled with simple taps of the screen. There's only one action that doesn't respond perfectly to the stylus command, and that's rolling. It's supposed to be done by drawing small circles at the edge of the screen, but it doesn't always work. It's not a big deal at all, as you'll rarely need to roll.

While your attacks and movement work great with the stylus, it's the puzzles that really make this Zelda feel like a fresh experience. No matter where you are, you can pull a map down and draw whatever you'd like on it. If you see something early in the game that you want to return to later, just jot it down. This helps tremendously with puzzles and general navigation. There are numerous clever applications of the DS hardware, and I don't want to spoil them in this review. Needless to say, you'll be utilizing every function of Nintendo's portable.

It still holds true to the classic Zelda formula of "go to temple, acquire item, get boss key, use newly acquired item to beat boss", but it's an altogether fresher experience than Twilight Princess. Even little tweaks make a nice impact on the gameplay, such as the omitted rupee cap and the way you have to carry the boss key at the end of a dungeon. Perhaps the most convenient upgrade is the fact that you always know exactly where you are in the dungeon thanks to the map being constantly displayed on the top screen.

While I loved almost every single part of Phantom Hourglass, there was one reoccurring segment that really annoyed me. After most temples, you'll have to battle through an Hourglass Challenge. These challenges involve going through multiple basements over and over while a time limit counts down. You can hide in safe zones that will stop the flow of time, however. Zelda has never been about time limits, and it shouldn't be about dodging Metal Gear Solid-esque guards either. Watching enemy fields of vision on the radar and sneaking around reminded me a lot of the first MGS on PSX, and it really isn't executed well in the Zelda universe. The fact that you have to replay many of these basements numerous times only makes it more frustrating.

While Wind Waker's graphical style was met with some harsh criticism here in the States, Nintendo has opted to bring it back for Phantom Hourglass. It's more or less a direct followup to that title, so get ready for more cel-shading and sailing. The DS handles the visual end of the game very well, and is certainly one of the best-looking 3D games on the system.

I can't overstate how impressed I was with Phantom Hourglass. It's one of the first adventure games in a long time that have really made me want to get every single item and travel everywhere I possibly could. While Twilight Princess was an undeniably fantastic game, Phantom Hourglass does more in terms of bringing the series forward. I can only hope it will be met with huge sales and many DS sequels.