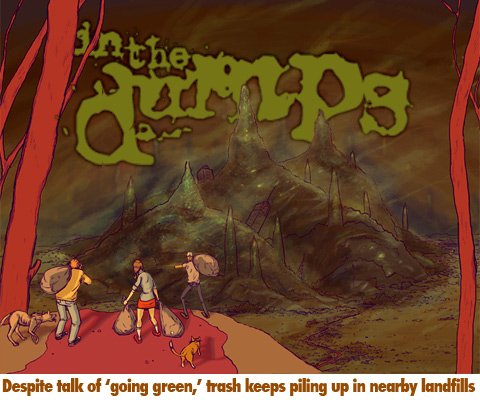 "Twelve-hundred acres, 260 feet deep. That's a lot of trash," says Ed. For a decade as an operator at a nearby landfill, this was his line of work. (Fearing potential reprisal from his former employer by agreeing to be interviewed, Ed asked that we not disclose his name.)

"It was all we could do to dig a hole fast enough."

Forget air pollution for a moment. Forget global warming. Forget pressing issues that, for most of us, exist only in the abstract, like nuclear waste and deforestation. Ed wants to talk about trash. Plain ol' trash.

Want to see a nation of laziness and greed? Where businesses throw away perfectly good materials when it's not profitable to recycle them? Where people are more wasteful than ever despite recycling at unprecedented rates?

Go to a dump. Look hard at a colossal, smelly pile of trash. Watch as the birds swarm over it. Here the meaning of cute phrases like "going green" melts away. Here you see what's kept hidden from us by fences, high earthen walls and perfume trucks.

Despite the recycling programs that became ubiquitous in the '90s, despite the trendiness-today more than ever-of paying lip service to environmentalism, the amount of trash the average person generates has actually increased. A lot.

In 1960, when the EPA didn't exist and a simpler America lusted freely after consumer goods without any notion of recycling, each person generated 2.7 pounds of solid waste per day. Today, although Americans recycle more than ever, we also generate a historically high volume of waste: 4.5 pounds per day.

None of this comes as a surprise. Such figures have been drilled into our heads by environmental agencies for years now. But if only people could see what Ed has seen:

"I think they should look at it and they should smell it every day," he says. "You know, it's our trash. And maybe it would wake up somebody. : I never dreamed that there was that much stuff that went into the landfills. We take it out to the curb and it's gone. It's just like magic."

To a man who has buried enough useful things in the ground to build an entire town (easily), our society is asleep at the wheel. To him, the fact that we allow convenience and zero cost to be prerequisites for recycling amounts to a monumental failure.

The city of Lawrence is proud of its recycling rate. About 34% of our municipal solid waste (ordinary trash) is recycled, which puts the city just above the national average of 32%.

Bob Yoos, the city's solid waste manager, estimates that 40-60%, likely closer to 40%, of the city's trash is readily recyclable. While many more materials are potentially recyclable, reusing more than roughly 40% simply wouldn't be feasible, he says, when taking market forces into account.

"Like plastics," he says by way of example. "It's hard to recycle much plastic in this part of the country. Because the markets that want the plastic are so far away, you can't afford to ship the plastic to the market. The fuel costs and stuff just kill it, and there's not enough value in the plastic to overcome that."

In other words, something is only recyclable, within the current system, when a profit can be made. Paper, for instance, is recycled twice as often as glass containers (50% is the national recycling rate for paper and 25% for glass containers) because there is a stronger demand for it and it can be transported more cheaply.

Sometimes market incentive is increased by government mandates, such as laws in some states dictating that a certain percent of newspaper must be made from recycled material. But demand is mostly driven by the private market.

"There has to be someone within a reasonable shipping distance that can and wants to take it," says Marge Franklin of Prairie Village, a longtime environmental consultant for governmental and business organizations. "Otherwise, what are you gonna do? You're gonna put it in the landfill."

"I've got 40 red-white-and-blue shoe strings and a thousand telephones that don't ring. Do you know where I can get rid of these things?"-Bob Dylan, "Highway 61 Revisited"

Businesses deal with this problem every day. If a business has a line of products that won't sell, say a plastic toy, the easiest and most cost-effective option is often to put it in the dump. Another option is charity, but giving a large number of toys away could hurt sales.

"That is a very ingrained business practice, especially among your major retailers, the big box stores," Yoos says. ":When the seasons change and their new lines come in, what hasn't been cleared out in their sales frequently will get thrown out.

"Usually-I'll say usually because I've seen this a lot-they usually do something to the article so that they're really not desirable to use again. They destroy their function, like maybe cut a slit in a tennis shoe or a slit down a shirt or something like that. :That's a business practice and, whether it's a good one or not, I guess it's good for their bottom line."

Another product that could easily be reused, if only it could find its way into the right hands, is construction and demolition material.

Ed says the landfill he worked at had an area designated solely for such materials. He says he saw two-by-fours, unused plywood and fiberglass insulation continually dumped by the truckload.

While such materials may be a handyman's dream, Franklin says they're often less than pristine and therefore ill-suited for reuse.

"Those products are often contaminated or there's no ready market for them with anybody that would recycle them," she says. "There really isn't the infrastructure, for the most part."

David Longhurst, comptroller for Gene Fritzel Construction Co. (and former Lawrence mayor), says his company does all it can to recycle, but sometimes recyclers simply won't take the excess material.

"We will 'offer' it, quote-unquote, to a recycler at no charge," he says. "All they have to do is come get it. Sometimes they will, sometimes they won't."

While this means a significant amount of trash is being saved from the landfill, it doesn't mean the total trash heap is decreasing. In fact, increasing recycling rates have merely offset increasing disposal rates.

The nation's 4.5-pounds-per-person daily disposal rate has remained about constant since 1990, thanks largely to recycling. But with population growth, the amount of trash filling the dumps has continued to climb, from 205 million tons a year to 245 in that span.

To kid oneself into thinking that recycling is on its way to usurping waste is to ignore this fact. With demand for many recyclable products low or nonexistent, trash is sure to continue to pile up at extraordinary speed given the status quo incentive for recycling: gentle social encouragement.

"People like to talk about buying recycled and all that and, you know, that is helpful," Franklin says, but "it's pretty hard to stimulate demand unless the demand is real."

Ed and his wife do what they can to recycle. They keep a rain barrel under their roof that they use to water their plants. They separate newspaper, cardboard, cans, plastic bottles and plastic bags. But he's seen too much waste to be self-righteous. He says that in the modern world, recycling seems like all but a lost cause.

"A few of us are gonna try to help out and recycle a little bit," he says, "but the majority of the people aren't even gonna try, unless something drastic happens."

Charlie Sedlock is division manager of Hamm Waste Services, which oversees a landfill just north of Lawrence (which is, incidentally, not Ed's former employer). We asked him about trash that people could've recycled instead of thrown away.

"Could they have reused that at any cost?" he said. "I'm sure they could've. It's just like the paper in the trashcan near you. If a person took the time, effort and money, anything can be done. We can do like astronauts and we can recycle our own waste in a couple minutes and reuse it."

Then he explained that this simply isn't realistic. And it made sense. But forget about that for a second. If astronauts can do it, why can't the rest of us?

Ed, impractical as it may sound, looks past the barriers. At his current job as a school custodian, he watches the younger generation. Do they think any differently? It's hard to tell. Every day he brings home cans he finds in the trash. Every day he empties dozens of plastic bottles he finds half-full of water.

He also salvages an impressive amounts of things the school throws out en masse-fluorescent light fixtures, vintage hardwood cabinets, old but working electronics-and distributes them amongst friends who can use the stuff.

It would take nothing less than a revolution of the mind to change a nation built upon rabid consumerism-a nation built upon disposal and replacement. He hopes the younger generation will be the one that wakes up. He hopes it will be the one that counters the sobering realities of cost and impracticality with the answer, "It's worth it to change."

"We need to be basically brainwashing our kids-from little-bitty up-to recycle," he says, "whether it's profitable or not."