It's our super spooky Halloween edition of Punditocracy's Actual News! Granted, it's mostly made spooky by the terrifying return of Phill Kline, but we also have chill inducing tid-bits on Stephen Colbert, Sam Brownback and homosexual warlocks. Stuff your gullet with candy corn and our caramel coated podcast! 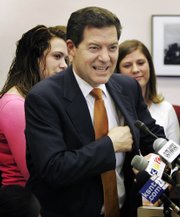 Kansas Senator Sam Brownback dropped his bid for the White House last week, announcing the end of his campaign to capture the Republican nomination for president. "We're out of money," said Brownback. Running as the "true conservative" in the Republican primary, Brownback never gained traction with the religious right voters he was courting, even though his conservative credentials opposing gay marriage and abortion are far greater than moderate front runners Rudy Giuliani and Mitt Romney.*... The final calculation to pull out of the race came when Brownback's advisers reluctantly informed him that fetuses aren't old enough to vote. Brownback said that he now looks forward to spending more time legislatively persecuting his own family. 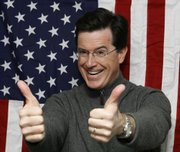 Comedy Central pseudo-newsman Stephen Colbert officially declared his candidacy for president last week, appearing on "Meet the Press with Tim Russert" to assure everyone he wasn't joking. "This is not a dream, you're not going to wake up from this. I'm far real-er than Sam Brownback, let me put it that way," said the comedian on Sunday. Colbert will only campaign in his home state of South Carolina and is attempting to get on the ballot in both the Republican and Democratic primaries. He is hoping to earn a South Carolina delegate that will vote for him at the parties' respective conventions when they nominate their presidential candidates.*...Colbert is running as a bipartisan consensus candidate, melding the impeccable hair of Republican Mitt Romney and the slightly weird ears of Democrat Dennis Kucinich, with a platform that is simultaneously pro-balls and anti-migration (of bears). 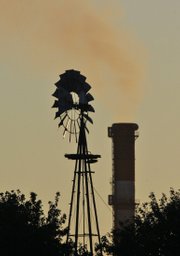 In a surprising announcement that made national news, Kansas' top environmental official last week rejected permits for two 700-megawatt coal-burning electric power plants in western Kansas. "I believe it would be irresponsible to ignore emerging information about the contribution of carbon dioxide and other greenhouse gases to climate change and the potential harm to our environment and health if we do nothing," said Kansas Department of Health and Environment Secretary Rod Bremby. The decision is a reversal of previous statements of support for the power plants from Governor Kathleen Sebelius. Sebelius finally agreed with the decision, citing health and environmental concerns, as well as the fact that most of the energy produced by the plants would have been sold out of state. State legislators who supported the plants argued that they would have provided needed jobs and infrastructure to western Kansas, and that Sebelius had caved to special interest groups.*...Some of the fringe special interest groups cited by coal plant supporters include "those breathing Nazis and anti-cancer nut-jobs." The powerful Black Lung and Chimney Sweep lobby has vowed to appeal the decision.

At least 136 were killed and another 250 were wounded in a bombing that rocked the Pakistani city of Karachi last week, an apparent assassination attempt on the life of former Prime Minister Benazir Bhutto. The blasts came as a crowd estimated at 150,000 celebrated Bhutto's return to Pakistan after an eight-year, self-imposed exile. Bhutto had returned to Pakistan with the hopes of forming a power sharing agreement with General Pervez Musharraf, who installed himself as president during a military coup in 2001. Bhutto suspects the bombings were the work of al Qaeda and the Taliban, who oppose Pakistan's close ties with the United States, but has not ruled out rogue factions of Pakistan's own parliament as suspects in the attempt on her life.*...Ann Coulter, in anticipation of Hillary Clinton's inauguration, is studiously taking notes.

Former State Attorney General and current Johnson County District Attorney Phill Kline last week filed more than 100 felony and misdemeanor counts against Planned Parenthood of Overland Park for allegedly providing illegal late-term abortions. The charges include 29 felony counts of providing false information and 84 misdemeanor counts of failing to determine viability for a late-term abortion, unlawful late-term abortion and failure to maintain records. "We are skeptical that these charges have any merit, and we continue to wonder how much politics influenced Mr. Kline's decision to file these charges," said a spokesperson for Kansas Attorney General Paul Morrison. Kline gained national notoriety last year for seeking the names and personal information of women and girls who had received abortions at the same Planned Parenthood clinic he's charging now, an effort that eventually failed.*...Kline also filed a motion seeking each patient's briefs. When the judge asked if Kline meant legal briefs, the crusading DA clarified that he wanted a hamper full of the women's dirty panties. 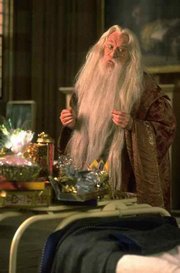