"As you may be aware," begins the letter Nickel, co-owner of Pawsh Wash and Pet Health Market, sent to local businesses, "the Lawrence Humane Society has had a 'ruff' year. The city cut their budget by 4%, necessary building renovations were completed and they are busting at the seams with homeless pets since spring."

She's billing the ball as a big "pawty," and at the end of the night the businesses that fetched the most money in the month-long "Throw 'em a Bone" fundraiser will be honored as "top dogs." 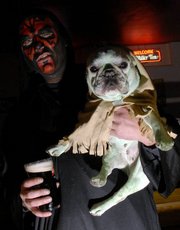 When I met with her and co-conspirator Tanya McNeely, co-owner of the Jazzhaus, she couldn't help but chuckle when she mentioned that they'll have a "catwalk for the dogs" for the doggy fashion show they're putting on.

"My Frenchy will wear anything," she says. "I've put her in shoes, I've put her in hats, outfits. She'll wear everything. My Boston, he will let me put stuff on him but then he acts depressed. Then he gets over the depression-that passes pretty quickly-and then he starts running around like crazy. And then it kinda falls off."

McNeely's Jack Russell terrier, Zappa, meanwhile, wore a mussel-man outfit with barbells for about 15 seconds. Then he tore it to shreds.

The following local businesses are accepting donations for the Lawrence Humane Society in the "Throw 'em a Bone" fundraiser:

This year Rosie's gonna be a sailor and Bean's gonna be a fireman. Zappa will be attending as a British lord. (Further proof that people and their dogs are strange.)