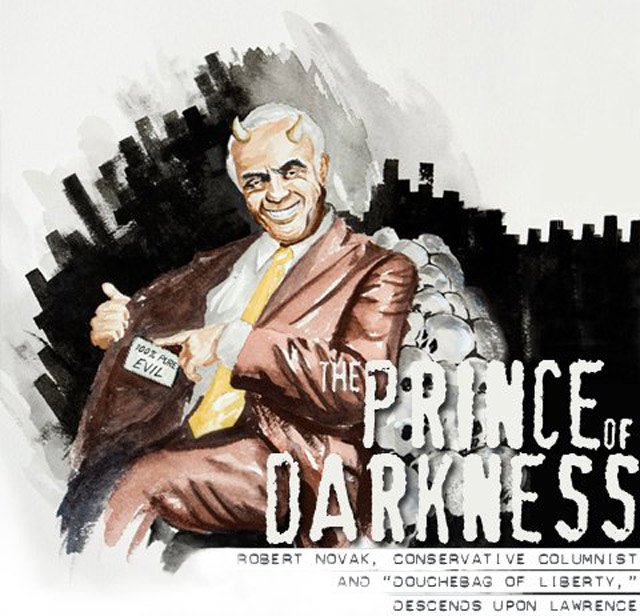 He doesn't like to talk much about that, however. Even though he was quite chatty in printing the classified identity of Plame in his column-passed along to him by Karl Rove as part of a coordinated effort to discredit her husband, Joseph Wilson, a vocal critic of the Bush Administration's Iraq policy-Novak is ironically tight-lipped when it comes to discussing the matter today. You can't really blame him, though, considering that he may have come very close to jail time during the resulting investigation into the Plame leak by U.S. Attorney Patrick Fitzgerald. Fitzgerald sent journalist Judith Miller to jail for contempt and convicted Dick Cheney hatchet man Scooter Libby of obstruction of justice, so Novak's probably still a bit squeamish about the whole thing.

Aside from that inconsequential chapter of his life in which he was the catalyst for one of America's most infamous political scandals, Novak's life is an open book-a book called "Prince of Darkness: 50 Years of Reporting In Washington," which you can conveniently buy following Novak's lecture at the Dole Institute of Politics. He'll even sign it for you! Just don't mention Valerie Plame-and for God's sake, whatever you do, don't bring up Jon Stewart. Robert Novak was kind enough to join lawrence.com over the phone and not discuss a lot of things.

The Prince of Darkness: Bob Novak, "Douchebag of Liberty," Descends Upon Lawrence

What can be said about Robert Novak that hasn't already been said? He's a veteran Washington reporter that's established himself as the preeminent conservative opinion maker of the last fifty years. He's a nationally syndicated columnist, has been a prominent cable news commentator, helped define modern political discourse-oh, and he's ...

lawrence.com: You've accrued a lot of titles over the years-"Prince of Darkness," "paleoconservative," "Novakula"-what do you prefer to be called?

Robert Novak: I don't care what you call me much. "The Prince of Darkness" was given to me many years ago by a friend of mine at the Washington Post. I was covering the Senate for the Wall Street Journal in 1959-I was 28 years old-and he commented on the gloomy view I took of things. He said, "You know, Novak, you really are The Prince of Darkness." That name kind of spread around. A lot of people don't like my economic philosophy and other philosophies, so they started to call me that as an epithet. I thought it would be a good title for the book. The second one, "paleoconservative," refers to people who believe in the global economy, are for protectionism, for restricted immigration-are far right wing on all of those issues. I love the global economy, I'm a free trader, and I'm for free immigration, so how could I be a "paleoconservative"? That's just a misnomer. "Novakula" is something that's put out by the nuts who go on the internet to attack me on the Valerie Plame case. I don't even know what it means, but I don't care.

It's a play on "Dracula" and goes well with some online Photoshop images. Are you at all upset that neo-conservative policy maker Richard Perle is competing with you for the title of "Prince of Darkness"?

Oh, no, he isn't competing with me. He knows that "Prince of Darkness" is my title and not his.

Jon Stewart has affectionately referred to you as "Douchebag of Liberty"-care to respond?

He's the host of "The Daily Show."

I don't know what that is.

It's on Comedy Central:

I know, I'm kidding. I never watch it and I don't comment on him. I have no use for him.

What about Jon Stewart as a media phenomenon:

I have no interest in Jon Stewart.

Well, he's been held up as an example of new media:

You don't understand what I'm saying. I don't talk about Jon Stewart and I don't watch him. I don't comment on him.

Do you think there's a juxtaposition between him and:

I don't think I made myself clear, did I? I don't talk about him.

OK, moving on. I heard that you're supporting Ron Paul for president:

No, I'm not supporting anybody. Where did you read that?

See, the thing is that there's so much bullshit on the internet-misinformation. That's the problem with life in the 21st century. I've been doing interviews for my book and people bring up things like this. Somebody brought up a comment I made to Keith Olbermann-I've never met Keith Olbermann in my life. Never been on his program, never talked to him. I asked him where he saw that, and he said, "the internet."

What do you think about the rise of online reporting and blogging versus your 50 years of traditional reporting?

Well, I'm just glad that I'm not going to be around much longer to have to see what happens. I think it's a very bad trend. People go online and blog and they don't do any reporting, they don't do any fact checking. It's just a mess of misinformation. There's all kinds of mistakes made on the internet.

What do you think of the field of Republican candidates for president?

I think it's pretty weak. There's not anybody that's really captured much attention. I like Ron Paul, he's a good man, but he's not going to be nominated. He's the only Republican that takes the same position on the war that I do, but he's not going anywhere.

Is there a division in the Republican Party between traditional conservatives and neo-conservatives on the Iraq war?

A majority of the people in the Republican Party support the invasion of Iraq. I don't think many of them are happy with how the war has been conducted, and I don't think they're too happy about nation building. Is there some discontent with the neo-conservatives who promoted the policy in Iraq? I would think there's some split on that issue, yes.

Is Iraq, and Bush's foreign policy in general, going to be an albatross around the Republicans' necks next year?

It doesn't help, in my opinion. The Republicans are sticking with him on Iraq, but he's lost a lot of support on other issues-too much spending, scandal, and the immigration issue. He's got a lot of problems besides Iraq.

Have you heard any advance word about Valerie Plame's upcoming book?

You do discuss the Plame story and your involvement with it in your own book-will you be discussing it when you speak in Lawrence?

If anybody asks me a question about it I'll answer it, but they can read about it in the book.

You've publicly said that you don't regret your actions in the Valerie Plame case, but do you regret that it's become such a defining part of your legacy?

I hope it's not defining. I do regret that some people may think it's defining.

You don't think that by printing her name in your column you did anything wrong?

Of course not. That was ridiculous.

Correct me if I'm wrong, but don't you call Joseph Wilson an "asshole" in your book?

Did you read the book? That is a distortion of what's in the book. Read the book. You don't have to hunt for it long, it's on page one of the book.

Do you think the White House played you as a pawn in a smear campaign?

Do you think that Karl Rove, as part of an orchestrated campaign, intentionally leaked Valerie Plame's identity to you?

No. But that's all in the book.

So you consider this a closed chapter in your life?

So what are you focusing on right now?

Surprisingly he doesn't come as such a douchebag in the podcast version, and the interview doesn't seem as combative as it reads. Don't get me wrong, he's still fit for disposing of something (TV news?) but maybe used women's sanitary wipes is going too far...

Are you kidding me?? You had artwork done and poasted THIS on the front page? The reporter wants to be so tough, yet every question he tries baiting Novak on, Novak agrees! I'm not a Novak fan, but the douchbag in this interview was clearing the man who dialed the phone. What a turd of as piece to prop up as an in-your-face exposition.

stop trying to be jon stewart, you local.com flunkies

I prepared for this interview the same way that I prepare for every interview, JD...by huffing paint thinner.

Woodward and Bernstein only ate paint thinner. Huffing is, perhaps, something that might foment a new generation of journalists...

this asshole should be in prison.