Bad: A little on the short side, easy difficulty

Up until the release of Up Your Arsenal, I had completely ignored the Ratchet & Clank series. I guess I just dismissed it as a kid's platformer for the first couple of titles, but I changed my tune once I started seeing the review scores come in. Based on all the positive things I heard, I picked up the third game in the franchise and had an absolute blast. Now, with the arrival of Tools of Destruction, the Playstation 3 has its first truly amazing visual accomplishment and one of its best games.

Within the first five minutes of the game, you'll get more action thrown at you than in almost any action/adventure/platformer out there. While you're only modestly armed at first, you'll quickly be grinding along lengthy rails while massive laser turret-wielding aliens try their damndest to destroy you. All the while, enormous buildings are falling amongst a huge city-wide war. This entire time, the framerate speeds along without a single hiccup. 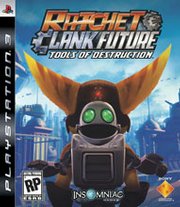 The game gives you a lot of incentive to keep going, as each of the numerous weapons you acquire can be leveled up in many different ways. You can spend "raritarium" collected from dead enemies on upgrades such as firing speed, ammo limit, increased range, and more. Each weapon has one unique ability that can be purchased, such as adding a freeze ability to your "insect swarmers". On top of that, each weapon levels up on its own the more you use it. Once these reach level 5, another unique ability is added. This means that the starting weapon that just shoots fireballs will eventually turn into a gun that shoots three directions of fireballs that subsequently set the ground on fire. This leveling up feature made me obsessed with getting each and every weapon to its full potential.

Ratchet isn't just limited to guns, however, he also has a large variety of gadgets and devices to help him battle his enemies. One turns your enemies into penguins, one releases a disco ball that makes them all dance, and you can even make a roomful of dancing penguins if you'd like. Every single enemy (including bosses) has their own dance animation, and it's as funny as it is useful.

On top of the general "run around and shoot/blow up/set on fire/whip/suck up in a tornado/turn into a penguin/generally destroy everything that moves" gameplay, there are several other types. There are three Starfox-esque flying levels that deliver far more than the last two or three actual Starfox games. You'll also find many of the grinding sections such as the one in the beginning of the game, as well as a couple "gyro-cycle" vehicle runs. On occasion, you'll control Clank in mini-levels that feature an odd assortment of invisible friendly aliens that you can order around.

It's also one of the few Playstation 3 titles that makes fantastic use of the Sixaxis motion controls. You'll use to it skydive, activate your "Geo-laser" to cut through rock walls, play a decrypting minigame, and maneuver when using your "Robo-wings". All of these implementations of the motion control make sense, and more importantly, control well.

All of the onscreen action is absolutely stunning. It's the first Playstation 3 game I've played that made me seriously wonder if the Xbox 360 hardware could handle the graphical load. There's constant background activity, the enemies animate beautifully, all of the weapon effects are great, and this all runs at a very smooth and consistent framerate.

It's genuinely difficult to think of a more solid title on the Playstation 3. The entire package, from presentation to graphics to gameplay is near perfect. My only complaint would be the fact that it's somewhat short (I'd estimate it took me around 10 hours) and very easy. Dying doesn't have any real negative consequences at all, as you'll retain all the bolts and experience points you had when you died. It's a small annoyance, but Bioshock proved that a game can still be great even if dying isn't much to be feared. Don't let the somewhat "kiddy" look of the graphics deter you from experiencing one of the best games on the system Tools of Destruction is excellent.