Lawrence provides inspiration for dressing up on Halloween 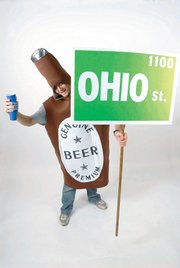 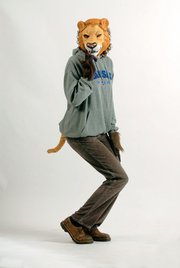 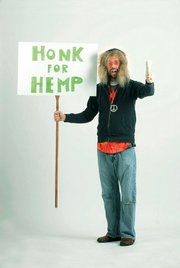 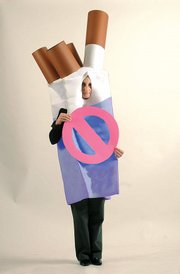 What is the best Halloween costume you've ever seen?

It's about reminding people that your creative vision and sheer cleverness trump theirs.

No place is that easier to display than when donning the right Halloween costume.

Sure, anybody can search the Internet for costume ideas involving the latest celebrity parody or social in-joke. But there's not a source out there that can pony up great advice for a Lawrence-based outfit ... until now.

Here are a few options gleaned from local news, pop culture and general Lawrence-ness that should impress your circle of Douglas County peers. And best of all, no one from Columbia or Manhattan will understand them.

There are two things that most college students share in common: wearing clothes that feature too many words and drinking irresponsibly. The mecca of the latter is the quaint area known as "the student ghetto." In layman's terms, that means the teen blocks of Ohio Street.

Most weekends the beer is flowing as freely here as if it were Basin Street in New Orleans. Usually, the college-age residents of these rental properties treat a Saturday night as if prohibition had just been lifted.

Some say it's a mountain lion. Others believe it's a cougar. Some have even claimed it's a puma.

Actually, those are all the same thing. But the point is a large, solitary cat has been spotted by civilians and investigated by scientists who claim the reclusive animal has set up residence in the wooded section of West Campus. It's apparently been living off deer and stray pets - so far, no wandering dormitory residents have become the main course.

For years, the marijuana - er, hemp - lobby has been fighting the power from the corner of 11th and Massachusetts streets. Their signs implore motorists to "honk for hemp" and "free hemp," despite the futility of pursuing the cause in a town where even smoking cigarettes is a crime.

So why not gear up like one of those honk for hemp guys? You probably have most of the costume left over from that Halloween party in 1998 when you went as the Unabomber.

Maybe you can convince a buddy to dress up like a driver who is giving your costume the finger.

What once was a vilified invader that signaled the end of all freedoms we hold dear is now comfortably embraced like a cute little puppy. Yes, it's the smoking ban.

Since July of 2004, Lawrence has been virtually smoke free. And yet the city's population is growing, and people STILL go to restaurants and bars.

Whether you are a proponent or opponent of the ordinance is irrelevant because the smoking ban costume can make a statement either way. Are you for the ban? Then smile while wearing the foam and posterboard getup. Against it? Then by all means scowl.