Garth Brooks, the Boston Red Sox and flesh eating ghouls (other than Robert Novak) round out the round up of this week's Actual News. Zombies gotta eat too, fool, so fatten up your brain with Punditocracy's knowledge nuggets!

Country mega-star Garth Brooks has come out of semi-retirement and will launch his comeback with a series of nine concerts at the Sprint Center in Kansas City. The shows are spread out from November 5 to November 14 and each one sold out in a matter of minutes, with ticket sales totaling around 140,000. *: Church leaders are urging calm and assuring everyone that the mass disappearance of rednecks is simply migration due to the Garth Brooks concert and not, as originally hoped, the rapture. In related news, the Chris Gaines comeback concert had to be canceled due to sluggish ticket sales at the dumpster behind Fuddruckers. 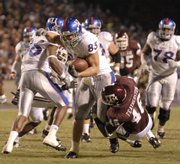 The 12th-ranked KU football team improved to 8-0 for the first time since 1909 with a 19-11 win over Texas A&M last week. Brandon McAnderson rushed for a career-high 183 yards and two touchdowns and Todd Reesing went 21-for-33 for 180 yards. The Jayhawks' fifth-ranked defense held the Aggies to 127 yards and six first downs through three quarters. A&M gained 191 yards in the fourth quarter, but only after the Jayhawks built an insurmountable 19-0 lead. With this win, Kansas is already guaranteed its best record since its 1995 team went 10-2 in the final season of the Big 8. *:Following the Jayhawks' victory, Secretary of Defense Robert Gates-who is the former president of Texas A&M-officially declared KU a state sponsor of terrorism and ordered U.S. troops to conduct tactical air strikes against Mark Mangino.

Nearly a half million people abandoned their homes and fled from a series of intense wild fires in Southern California last week. The fires were fanned by intense Santa Ana winds that gusted up to 100 mph, pushing flames across more than 500,000 acres, destroying more than 2,000 homes and forcing thousands into emergency shelters in seven Southern California counties. Damages could reach a billion dollars and seven deaths have been attributed directly to the fires. The causes of the fires have yet to be determined, but officials suspect that at least one of the more than a dozen blazes was arson related. *:California Governor Arnold Schwarzenegger hasn't ruled out undocumented aliens as being the culprits, especially "the ones with lasers and the devices for the invisibility and who are being collectors of the human skulls for trophies and the so forth." Adding, "You know-Mexicans." To provide a sense of scope, state officials say the raging fires were so intense that-for one full week-John Travolta was not the most flaming thing in California.

Turkey, the moderate Muslim nation north of Iraq that is a crucial ally to the United States' Middle East policy, has massed up to 100,000 troops along the Iraqi border in readiness for a possible large-scale incursion to hunt down some 3,000 guerrillas who use the region as a base. The Turkish government has long been in conflict with the semi-autonomous northern region of Iraq known as Kurdistan, claiming that the Kurdistan government has knowingly been harboring the socialist militant group PKK. PKK aims to create a fully autonomous Kurdistan that would consist of northern Iraq and southern Turkey, launching numerous terror attacks over the years within Turkey's borders. The United States and the Iraqi government are attempting to persuade Turkey to resume diplomatic talks with Kurdistan in an effort to avoid military action. *:President Bush himself cautioned that war must be used only as a last resort and invading Iraq would be highly irresponsible, but even he couldn't keep a straight face while saying it. 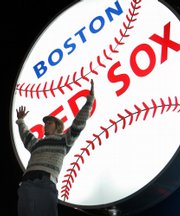 The Boston Red Sox swept to their second World Series title in four years Sunday night with a 4-3 win over the Colorado Rockies, handily winning the championship with a four-game shutout. Police in riot gear cleared several large crowds gathered around Fenway Park in Boston early Monday and made 37 arrests, mostly for disorderly conduct. No serious injuries were reported. *:Boisterous Bostonians celebrated the victory by recreating the historic Boston Tea Party, except that instead of tea being dumped into Boston Harbor, it was massive amounts of vomit. Boston police, fearful of rioting, declared a citywide "state of wicked pissah."

Former CIA agent Valerie Plame, the operative whose covert status was compromised by conservative columnist Robert Novak and former White House strategist Karl Rove in retaliation for her husband's opposition to the war in Iraq, released her memoir last week. "Fair Game: My Life as a Spy, My Betrayal by the White House" details her life in the CIA, the leak of her identity, and the resultant political firestorm that ended her career and triggered the federal investigation that found White House advisor Scooter Libby guilty of obstruction of justice. The book, which had to be cleared for publication by the CIA as part of a secrecy agreement Plame signed when she joined, was dramatically redacted for what she says were reasons more related to the White House's political agenda than to national security. Publisher Simon & Schuster, which lost a court fight over the deletions, opted to print the book using gray blackout over the parts objected to by the CIA. *:Simon & Schuster's plans to keep the book under a strict embargo were foiled when Robert Novak, first amendment crusader and Douchebag of Liberty, leaked an advanced copy given to him by Karl Rove.

Undead enthusiasts shambled down Massachusetts Street last week in Lawrence's first-ever Zombie Walk. About 50 flesh-eating ghouls, complete with tattered clothes and rotting corpse make-up, began their parade of the damned at South Park and shuffled their way through downtown to help usher in the Halloween weekend. *:The zombies encountered some resistance from city officials, as police initially mistook the brain-dead, foul-smelling horde for a roving band of hippies. Â»