Republican Idaho Senator Larry Craig triggered another congressional sex scandal last week when it was revealed that he was arrested in June for attempting to solicit sex. Craig was busted in an undercover sting operation in a Minneapolis Airport men's restroom, an established gay cruising spot. According to the police report, Craig entered the bathroom stall and began tapping his foot and motioning his hand underneath the divider in the adjoining stall where the undercover officer was stationed, reportedly signs of attempting to initiate a sexual encounter. Despite having pled guilty to the charge of disorderly conduct, Craig-who is married with children from is wife's previous marriage-denies the charges and says he only pled guilty to avoid a public trial. News of the arrest surfaced at the same time an Idaho newspaper was finishing an investigative report on Craig's sexuality, which had been called into question since his involvement in the first congressional page scandal in 1982. Craig has long been a staunch social conservative, supporting anti-gay measures and calling on President Clinton to resign during the Monica Lewinsky scandal. The Republican Party has stripped Craig of his committee assignments and is calling on him to resign.*:Craig's problems instantly boosted Louisiana Senator David Vitter's standing in the Republican party, with his campaign releasing the new slogan, "David Vitter: Heterosexual Whoremonger!" Inspired by Craig's brave efforts to legislatively persecute himself, Senator Barack Obama has introduced a measure which would revive Jim Crow laws.

Last week marked the second anniversary of Hurricane Katrina, the worst natural disaster in U.S. history. The massive storm-and the botched government response-left more than 1600 people dead and much of the gulf coast devastated. President Bush commemorated the event by speaking in New Orleans, a city virtually destroyed by flooding after the storm. The city has yet to fully recover and many in New Orleans feel that the federal government has not devoted enough resources to rebuilding the city, with New Orleans newspaper The Times Picayune printing "Treat Us Fairly, Mr. President" on their front page the day of Bush's visit.*:In order to attract more media attention to their plight, New Orleans plans to re-flood the Lower Ninth Ward with the adorable and talented cast of "High School Musical 2" and "Hannah Montana"! Bush pledged to provide more federal resources as soon as New Orleans relocated to Baghdad.

An Iowa judge last week struck down the state's decade-old gay marriage ban, ordering the immediate issue of marriage licenses to the same sex couples who initially brought the lawsuit. With his ruling that the ban was unconstitutional, Polk County Judge Robert Hanson effectively legalized gay marriage throughout Iowa. The Polk County District Attorney has filed a stay motion in order to halt any further marriages, and state lawmakers have vowed to bring the issue to a vote when the congress convenes in January. Pundits are predicting that the ruling will make gay marriage a campaign issue for presidential candidates in the 2008 race, as Iowa is an important early state in the nomination process..*: Republican campaigns are already decrying the ruling and threatening to boycott Iowa: "When it comes to the caucus, we plan to pull out in order to stimulate our base," said one sweaty G.O.P. strategist from a stall in the men's room at the Dubuque Airport. On the Democratic side, while campaigning in Iowa, Mike Gravel and Dennis Kucinich decided to get married "just for the hell of it." 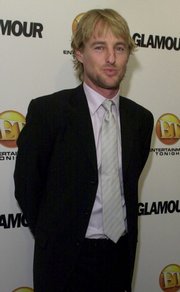 Actor Owen Wilson was rushed to a Santa Monica hospital last week after reportedly failing a suicide attempt. The star of such films as "You, Me and Dupree" and "The Wedding Crashers" is now recovering at Cedars Sinai Medical Center. There's been no word on how or why Wilson attempted to take his own life, but singer Courtney Love has been publicly speculating that British actor Steve Coogan was somehow involved. Coogan and Wilson were making a film together when Wilson was hospitalized, and Love has been romantically linked to Coogan in the past. Coogan has denied Love's accusations.*:Explaining her hostility towards Coogan, Love responded, "Driving sensitive blonde men to kill themselves is MY job!"

Police are still investigating last week's incident at a Kansas City McDonald's in which an employee gave premature birth to a child in the restaurant's bathroom and then attempted to flush it down the toilet. Thanks to timely intervention by paramedics, the baby survived, and both the infant and the 20-year-old mother are being treated at area hospitals. The woman's coworkers called authorities after finding her in the bathroom, and upon arriving at the scene paramedics discovered the non-responsive child in the toilet covered with toilet paper. The woman reportedly said she had tried to flush the baby three times. Later she told police she didn't realize she was pregnant, though coworkers have given contradictory statements. No charges have been filed against the mother at this point.*:Coworkers initially didn't suspect anything wrong, as most people who go into the bathroom after eating at McDonald's are weeping with regret and attempting to expunge things from their system. In a happy ending, the premature infant was given a part time job at the same McDonald's.

The Lawrence city employee responsible for mediating landlord-tenant disputes is being prosecuted in Municipal Court for owning slumlord-quality rental properties. This is the second time in a year that Paul Winn, a specialist in dealing with rental disputes in the city's Human Resources Department, has been charged with owning property that fails to meet the city's minimum housing code. Winn, also a pastor with Praise Temple Church of God in Christ, is responsible for the property at 1200 New York St., which has housed two known criminals and has been visited by police 36 times in the past two years. The violations cited against Winn include water leaking through the ceilings of the apartment, no gas service at the apartment and "general dilapidation."*:Investigators are also looking into complaints about Lawrence's Health Inspector, who is simultaneously a general manager at "The Waffles and Feces Pantless Shack" located at the old nuclear waste dump.

Raging forest and brush fires ravaged Greece last week, killing 63 and leaving thousands homeless. Officials say that nearly 469,000 acres, an area equivalent to the size of Rhode Island, were destroyed on this small Mediterranean nation. Although most of the fires have been extinguished, an ongoing heat wave is raising fears that more could ignite. Greek authorities suspect some of the fires were set deliberately and have so far arrested 30 people.*:Police have no solid leads, but they're pretty sure that Zombie Richard Jewel did it.