Good: Still has that "must play every day" feel, some fun new exercises, more great sudoku

No one in their right mind is going to doubt that the DS is the optimum "pick-up-and-play" system. This has become even more obvious since Nintendo launched their "Touch Generations" line of titles aimed at casual crowds. The original Brain Age title arrived right at the beginning of this new craze, and proved to be a massive seller both here and in Japan. Brain Age 2 features more or less the exact same layout and concept of the original, but that's not a bad thing. This sequel features more of the great training exercises and sudoku that became quickly loved by DS owners.

While the other brain series, Big Brain Academy, was more cartoony and bright, the Brain Age series has always gone for a more "scientific" feel. While the actual neurological benefits of the game can be debated, it does a great job of seeming like an actual tool for your brain. It has a nice clean layout, graphs that chart your progress, and a disembodied floating head of a Japanese neuroscientist. If that doesn't make you feel like you're expanding your intellectual capacity, I don't know what would. 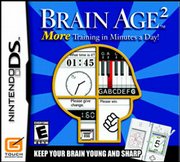 Change Maker is great new training exercise, and my high school cashier experience at movie theaters and videogame stores helped me significantly. It shows the cost of an item, and how much the customer gives you. You have to tap the correct bills and coins to make their change as fast as possible. I hated Piano Player at first, but started enjoying it after I learned where all the notes were. Sign Finder is the most math-based of the new exercises, and Word Scramble has you assembling words out of a circle of rotating letters. Calendar Count will really require you to think and concentrate on various dates and days of the week. It'll say something like "what date was it two weeks ago?" or "what day of the week was it two days past this time next week?"

Word Blend is decent, but extremely difficult. It says two or three words at one time, and you have to listen hard enough to figure out each individual word. Memory Sprint is easily my least favorite, and it requires you to remember what place a specific runner is in throughout the duration of the race.

Everything is in the exact same visual style as the original Brain Age, and those familiar with that title will feel right at home here. It's almost more of an expansion pack than a full fledged sequel, actually. Brain Age 2 doesn't re-invent the wheel, but it offers DS owners more of the training and sudoku puzzles that made the original title such a hit.