Good: Despite primarily using two buttons, it has a lot of variety between the levels

Bad: Only using two buttons can get a bit old after a while, despite how much variety there is

About two years ago, I got very, very frustrated with DK: King of Swing (http://www.lawrence.com/news/2005/sep...). I had a lot of trouble progressing through the more difficult levels, and criticized it for being too hard for a game that I imagined many younger gamers would be interested in. The basic gameplay concept from King of Swing has now arrived on the DS in the form of DK Jungle Climber, and it's actually a far better title.

Just like its predecessor, Jungle Climber uses only the L and R buttons for basic movement and climbing. You can press the A button to perform jumps that will bust barrels and hurt enemies, but your index fingers will do most of the work. Each stage is filled with dozens and dozens of pegboards that float in the air for no discernable reason. The basic idea of the game is simple: use L and R to climb on the pegs to get from the beginning of a stage to the end.

While it sounds simple, each stage has a large number of various gameplay elements and enemies sprinkled amongst the pegboards. As you rotate around pegs, you can pick up rocks with your free hand and hurl them at enemies (as well as switches and explosive barrels). You can latch onto flowers and have them fling you far across the stage. DK's pal Diddy is included in Jungle Climber, and you can use him for ranged attacks and other special moves. He can fly with feathers and swing a hammer around at enemies, and you'll find him scattered across the levels in barrels just like in Donkey Kong Country. 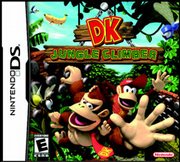 My main complaint with the original was that the levels were mostly vertical. This meant that there were numerous times that you'd miss a peg and plunge all the way back down to square one. While there's certainly a good amount of verticality in Jungle Climber, it's helped by the dual-screen format and improved level design overall. It's still no picnic, however, as there are some immensely difficult stages.

On top of the standard adventure mode, there is single-cartridge multiplayer and some fun distractions in the form of minigames. One involves catching and juggling falling bananas, another has DK jumping logs, and another challenges you to climb to the top of a level as fast as possible (complete with savable ghost data).

Another huge improvement over the original is the art style. King of Swing opted for a hand-drawn approach to the DK world, but it ended up looking less like the inspired art of Yoshi's Island and more like a six year-old's doodlings. Jungle Climber takes the "if it ain't broke, don't fix it" mindset by emulating the look of the SNES Donkey Kong titles, and it's far better off for it.

It's not a must-have title for the DS, but Jungle Climber is a nice game to pick up and play for a few levels at a time. Extended play might cause you to tire a bit of the L and R movement, but it's a fun distraction in short bursts.