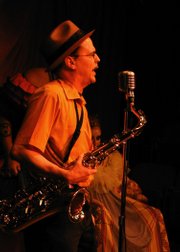 But that doesn't mean their influence is ever far from his mind.

"It's more beat-oriented," Baker says. "Some of my older stuff has been called hipster poetry."

Baker, who performs spoken-word poetry set to music, will honor the beat poets with the show "Beat Bop Poetry Stop" at 7 tonight at the Lawrence Public Library, 707 Vt.

The show coincides with this week's 50th anniversary of the publication of Jack Kerouac's "On the Road," one of the signature books of the era along with William S. Burroughs' "Naked Lunch" and Allen Ginsberg's poem "Howl."

The first half of tonight's show will be Baker's solo works, accompanied by himself on saxophone. The second half will be with his three-member band, Bopaphonics.

Baker, who also goes by the moniker Reverend Bakerbop, sees his work continuing a long line of oral storytelling that dates back to ancient times and continues today with hip-hop.

"There's always been a common thread, of storytelling using clever imagery and sharp rhythm," he says. "It goes on and on and on. It's just a circle."

Bopaphonics includes Baker on vocals and sax; Barry Barnes on harmonica, drums and vocals; and Roger Holden on guitar.

Baker says the band sometimes is called hip-hop, though he says it really defies categorization.

He thinks the Beat Generation authors influenced his own work through similarities in language and rhythm, as well as edgy materials. Baker wrote a spoken-word song called "New Age Imperialist" shortly before the war in Iraq began.

"I don't think it's that much different than someone trying to be a songwriter," he says.

Barnes says he likes being in a group that isn't easily categorized.

"We're sometimes avant-garde," he says. "We try to stay out of the pocket. That's easy for us."

He describes the music this way: "Some of it sounds like scary circus music. There are jazz and blues elements."

As for "On the Road," Barnes says he read the book years ago but doesn't know if he's specifically influenced by it today.

"I need to read it a couple more times before I can make a judgment on it," he says. "It's like 'Naked Lunch' - how many times can you read it before you start to figure it out?"