Something about jazz-it never feels quite at home in the wrong environment.

Like hearing some Coleman Hawkins performed in his hometown performing arts center-posh-with a bunch of wannabe rich, white-haired white people filling out the seats (all reclining, all with armrests). So what? Even Bitches Brew as a soundtrack to sunny day swimming in some secluded fishing pond-while perfect-isn't truly at home.

For want of a jazz club cut from the cloth of Kansas City's halcyon days, Lawrence cats can come damn close every Thursday night. The dank, dark, red-lit vibe of the basement at the Eighth Street Tap Room is perfectly suited for jazz (except that the bass, fully upright, would scrape the low ceiling). And the Snuff Jazz ensemble is perfectly suited for Lawrence-they're young and immensely talented musicians, with chops in all kinds of genres.

Something about jazz-it never feels quite at home in the wrong environment. Like a hearing some Coleman Hawkins performed in his hometown performing arts center-posh-with a bunch of wannabe rich, white-haired white people filling out the seats (all reclining, all with armrests). So what? Even Bitches Brew as a soundtrack ...

lawrence.com: Your name, Snuff Jazz, was an album title of another experimental jazz trio, right?

Mark: Was it? Please educate us. [released in 1988 by prolific New York trio Borbetomagus]

Josh: It is actually, Mark. He's been published. So you're just confusing him with him.

Well then, how did you come up with your name?

Mark: Well the premise behind it is, because there's a lot of really boring, stale sort of dinner jazz-in Kansas City in particular, but I'm sure you have some here in Lawrence too-that we'd invite different jazz notables that have given their life to playing really boring jazz. We'd get them in our group, and we'd play really exciting jazz and get them really excited. And right when you really thought this is really smokin' hot jazz with this dude, we'd kill him.

We're not really gonna kill anybody. But the idea is that this is the other side of jazz. It's energetic, it's truly improvisatory. It's a conversation between whatever three or four people get together that day.

In Lawrence, it seems the jazz that's happening is behind closed doors.

Jeff: In any college town, there's people learning jazz in a scholastic way. At some point they probably will take it to the people-and that will either be a really good or bad moment, depending on who it is. It's getting out of that practice-room mentality, or that dinner jazz mentality-if you've been in it, it's pretty hard.

Most jazz in Lawrence happens when the sun is out and people are eating brunch.

Mark: I would hope that this is the antithesis of that. That's why we start so late at the Tap Room.

Any thoughts on the Tap Room as a venue, since you keep coming back?

Mark: I love the Tap Room. This is my ideal little-well, it's not smoky anymore, cause this is a smoke-free town, but that's sort of a plus even though I don't want to admit it. It's a great little bathed-in-red-light dive. You get 20 or 30 people in here that are actually interested in listening to you play experimental jazz, and it can be a really great vibe.

Jeff: I lived in Lawrence in the early and mid-'90s, and it was three years before I even heard of the place. It was during summer, and there were no students, and the place was quiet. A buddy of mine was like, hey, let's go to this place. There was nobody around, there was one guy behind the bar. I felt like it was my joint. Three months later I discovered it had a basement that was equally as cool. 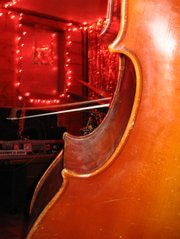 Josh: '97. I was a sophomore in high school. I would drive up to Lawrence from Kansas City, from school.

Mark: We'd sneak him into the Tap Room. He's a Snuff pup.

This collective you have going-how do get this kind of collaboration?

You've got a rotating lineup. What about your instruments?

Mark: Recently here at the Tap Room we had a Wee Snuff band, which was all of us playing tiny instruments. A wee drum kit. I was playing only tiny, tiny horns. We had a tiny banquet with deviled quail's eggs.

Are there any plans for the bizzaro version of that-giant instruments anywhere?

Josh: No. Even smaller.

Mark: I'm a pretty big guy. To strive to be giganticum isn't that interesting.

Josh: That, and we probably couldn't play here.

Mark: [to Jeff] You're bass already scrapes the ceiling.

Jeff: It was great though. We really were playing some smokin' hot jazz, but on tiny instruments. I think they thought we were just going to pluck along. Instead we were really ripping it up.

Anything you want to put out into the world about Snuff Jazz, and why someone should be your groupie?

Mark: Why someone should be our groupie?

Josh: Well, it's just definitely not a groupie-worthy kind of act.

Mark: Have we ever had a groupie?

Jeff: You might be able to qualify Super Fan as a groupie.

Jeff: There's a guy that I think has seen every iteration of the Snuffage.

That's what I was getting at-wasn't envisioning someone asking you to sign boobs or anything.

Mark: That happens, too.

Is there any truth to the rumor that Devendra Banhart (see upper right photo) will be sitting in tonight playing bells and hand-drums? That guy really could use a vacation from the dinner-jazz set.