Bad: Still too much scanning, loading doors may bother some, doesn't change much in the series besides the controls

It's been almost a year since the Wii was released and became a phenomenon, but we still haven't received a masterpiece that was truly built for the console. Sure, Twilight Princess was one of the best games of all time, but it was clearly a Gamecube game with some tacked-on Wii controls. Metroid Prime 3, on the other hand, feels like a true Wii title from beginning to end.

Prime 1 and 2 were fantastic titles, but the motion controls in Corruption will make it hard for gamers to go back to the standard format. The Wiimote and Nunchuk work perfectly both in terms of exploration and combat, and truly prove that a FPS can work beautifully on the Wii. In fact, given a choice between Corruption's controls and the standard dual-analog setup, I'd go for Metroid's anyday. It's fast-paced, intuitive, and far more involving than simply twiddling your thumbs.

The motion isn't relegated to simply moving and aiming, as you'll encounter various situations that require unique motions. You'll use the motion to control Samus's hands in her ship's cockpit, turn levers, and toss your grappling hook, amongst other things. All of this works beautifully about 95% of the time, but you'll occasionally hit a snag with the odd lever or motion that doesn't respond correctly. 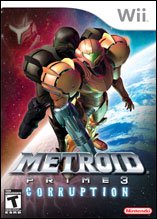 Samus's biggest new addition is "Hypermode", which allows her to drain an energy tank in exchange for a far more powerful Phazon beam (temporarily). It can take down enemies far faster than your standard weapons, but it comes with a price. If you don't completely drain the Phazon out of your system in time, it causes an overload that takes over your suit and kills you.

Outside of the obvious control improvements, my favorite step-up in Corruption is definitely the epic boss fights. There are several mini-boss fights and about 4 or 5 massive battles. These end-world bosses easily rank up there with anything seen in the Zelda series, and will force you to do some serious thinking and trial-and-error. Do yourself a favor and try taking them on without a guide or website telling you how to defeat them:.it's far more rewarding.

No Metroid game has ever made a significant effort towards a serious narrative, but Corruption makes perhaps the strongest effort. For one, it's the first in the series to feature voice acting. It's not top-notch, and the story isn't particularly gripping, but it lends itself towards some semblance of direction (at least moreso than the previous games).

Perhaps my biggest complaint with Corruption is the fact that it doesn't deviate too far from the standard Prime formula. You still explore the various planets at your own leisure, gathering suit and beam upgrades that'll allow you access to previously unreachable areas. In fact, the basic gameplay format hasn't changed significantly since the 1987 NES original (just the perspective).

On top of being the Wii's first FPS that truly delivers on the controller's promises, it's also the first that proves that the system can display some very nice graphics. Obviously it won't be standing up to Bioshock, Metal Gear Solid 4, or other HD competition on 360 or PS3, but it's easily the best looking game on the Wii. It may not push polygons like the more powerful systems, but the art style and atmosphere surpasses the large majority of their games.

I believe that Metroid Prime 3: Corruption might just be the best game on the Wii, but I hesitate to recommend it to everyone. It's a very challenging title, and will certainly cause the Wii's target audience (casual gamers) quite a bit of trouble. I've played Metroid games my entire life, and I still found myself lost constantly. Despite the difficulty, it's still an extremely rewarding experience that could only be possible on the Wii.