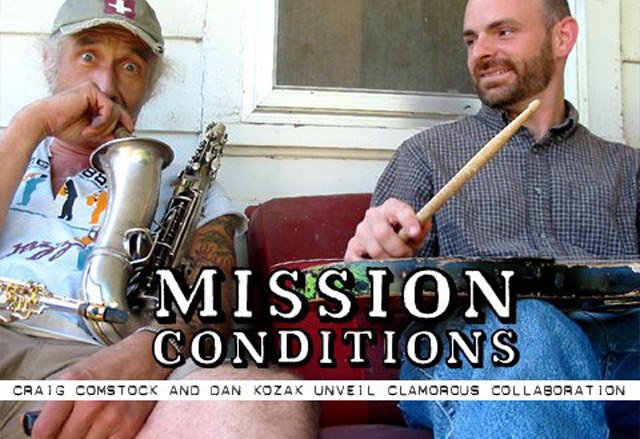 As collaborations go, the pairing of Craig Comstock and Dan Kozak is a bit like treating an LSD overdose with hallucinogenic mushrooms-shit just keeps getting crazier. Comstock's one-man avant-punk band This Is My Condition has already established its outre identity: drumsticks simultaneously beating drums and detuned guitars, loop pedals begging for mercy and microphones berated by Comstock's throaty yelp. Kozak's wild side may surprise folks who have heard him play more conventional jazz at the corner of Seventh and Mass. streets, but it's a known commodity amongst anyone who's attended his jazz festivals in Topeka.

The duo celebrates the release of their debut collaboration "This Mission" with a performance this Saturday at Love Garden that also marks the arrival of the debut This Is My Condition LP "Cut Loose." We cajoled Comstock and Kozak-or DKZK, as he prefers-into sharing both recordings with us during the course of a delirious half-hour podcast.

As collaborations go, the pairing of Craig Comstock and Dan Kozak is a bit like treating an LSD overdose with hallucinogenic mushrooms-things are going to get even crazier. Comstock's one-man avant-punk band This Is My Condition has already established its outre identity: drumsticks simultaneously beating drums and detuned guitars, loop ...

lawrence.com: How did you two cross paths?

Comstock: A friend of mine introduced me to Dan by saying, "You should really meet this guy." So I met him, and I agreed.

So how did you decide to start playing music together?

Comstock: I invited him to play at a noise festival I put on in Kansas City last summer called Midwest Sonic Bivouac, which at some point in the future will be a franchise and it'll happen every year.

This Is My Condition and Dan Kozak

DKZK (laughing): It'll be right next to every McDonalds in town.

Comstock: OK, I didn't mean it quite like that. But I had him play there, and at some point after that we were like, "Yeah, we should get together and jam." We liked it, it was cool, and then we had a couple of opportunities to play shows together.

You recorded "This Mission" at Black Lodge Studios with Ed Rose?

And it was done in one take?

Comstock: Yeah, all the tracks were live. There was a bit of a stumble at the beginning of one of the songs. It lasted about 30 seconds and then after that we put the whole rest of the 50 minutes on it : I'm 90 percent sure I'll have a multimedia CD for this release with some video, because Ed set up three cameras in the studio while we recorded.

So Dan, how did this project strike you when you first started playing with Craig?

DKZK: I loved it from the first bleepin' blat. I got into jazz through the '60s avant-garde, which was pretty wild and crazy. Although I will always love playing straight-ahead jazz, spontaneous improvisation is where my heart lies. The type of stuff that Craig does is beautiful. It's just what I've been wanting to do for years.

I really have a problem being pigeonholed as a jazz musician. Especially in this part of the country, people have real strange stereotypes of what a jazz musician is. Through my festival over the years, I've drawn the ire of the jazz establishment : I brought in lots of musicians that you wouldn't hear in this part of the country, like the late Rufus Harley-the only jazz bagpipist in history.

So how much of "The Mission" is improvisational?

Comstock: The first song is one that I've been playing for awhile and Dan was nice enough to complement it. The rest of it is : I don't know. Dan?

Comstock: The entire structure is thought out beforehand and then splattered inside your brain. That's improvisation, right? Previous compositions in your brain-deconstructed, reconstructed, and then happy accidents.

So what sort of listening inspires you guys?

DKZK: John Zorn has always been one of my heroes. To me, he's the 20th and 21st century genius of music. Lately he's been doing lots of things with Mike Patton, who I guess first gained fame with Faith No More. Between Zorn and his saxophonics and Patton-who has taken the art of vocal music to a very frightening place-it's beautiful.

So Craig, you have a blog up with some of DKZK's poetry?

Comstock: Yeah, I put it up on thisismycondition.com/dkzkblog.

How'd that come about?

DKZK: Because he's my biggest fan.

Comstock: Yeah, he just produces all of this poetry and it's cool and I dig it so I wanted to share it. I've been meaning to do it for awhile and I finally did it.

DKZK: I have a friend in New York who saves them, and in three years there are more than 1,000 of them.

Do you write every day?

DKZK: Oh yeah. Occasionally I f*ck up and don't write, but never for more than one day in succession : I don't like to call it poetry. I call it pootery. I consider myself a poot.

This was an amazing show last night. These guys are real treasures.