I've been somewhat dreading the release of Halo 3. Throughout the years, I've been very vocal in my opinion that the Halo series is unbelievably overrated and nothing more than a slightly above-average first person shooter. I still stand by this opinion in regards to Halo and Halo 2. They featured absolutely horrible and repetitive level design, a yawn-inducing story, and a terribly generic protagonist. With the release of Halo 3, I was fully prepared to write a very critical review if it was anything like its predecessors.

Surprisingly, this is not the case. I loved Halo 3, and I'm certain I'll be playing it for a long, long time. My main complaint with the series was in regards to its level design. The first two titles featured blander-than-bland levels that involved running through dozens of nearly identical rooms, simply blasting away at anything that moved. The few times I did enjoy these games was when the action was taken outside. Thankfully, Halo 3 features significantly more outdoor environments, and they're a blast to play through. There's a huge variety in your surroundings, with plenty of terrain to take advantage of. 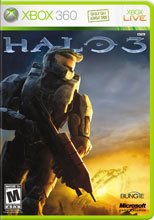 There were a couple moments near the end of the game that reminded me of the worst parts of its predecessors, but the campaign is surprisingly excellent otherwise. It becomes markedly more impressive when you're playing co-op with four players. Lag pops up occasionally, but not enough to significantly detract from the experience. One complaint I have when playing co-op (or multiplayer in general) is that only one player on each 360 can talk via a headset.

Despite all the improvements, there's still one area that is woefully sub-par. The story is still generic and seems like a bad excuse to shoot a bunch of aliens. I know a ton of people that try to convince me that it's a fantastic story, but I just don't get the appeal. I received a crash course in the narrative from my editor, and then spent a long time getting fully caught up via Wikipedia and various message boards. Even after reading tons of information about the Forerunners, Covenant, the Flood, and Cortana, I see nothing that doesn't sound like a bad Sci-Fi Channel original movie. Halo 3 is no different at all, and features a really, really awful and uninspired ending. It doesn't help that the series features a protagonist with all the likeability and personality of a tree stump.

Bungie's attention to multiplayer longetivity and overall quality is truly incredible. All of the maps are unique and fun to play on, and the amount of game modes is staggering. Every mode has alterations on the same formula, and you can even make your own fully customized versions of each. For example, I made a variation of Juggernaut called "Predator". In this, I cranked up the Predator's speed to 300%, doubled his jumping ability, and made him super-strong and partially invisible. I was amazed as I went through the various menus and realized just how customizable the multiplayer experience is.

On top of creating gametypes, you can alter existing maps in something called the Forge. You can fly around the level and place whatever you want, wherever you want. Want rocket launchers and exploding barrels all over Valhalla? Done. Want to see how many Warthogs you can stack on top of each other? No problem. It almost becomes a game in itself if you run around the Forge with other players.

The real meat of the Halo 3 experience lies within multiplayer, and it's hard to find another console game with a comparable system. Halo 2's party system is back, and is still hugely convenient and perfectly functional. All of the weapons are balanced wonderfully, and the new ones are great additions. The needler is great, dual-wielding is much better, the new grenades and equipment are a blast, and you can easily mute those annoying racist 12 year-olds. This game will be played for years online.

One aspect that I'd love to see incorporated into more games is the excellent Theater mode. The game automatically saves all of your multiplayer matches and campaign missions, and you can jump into the Theater and save clips and screenshots to your hard drive. You can even upload them to your personal File Share space and show off your exploits.

Halo 3 certainly looks good, but there are many games on the 360 that look far better. It's essentially Halo 2 in high definition. One thing that I really can't wrap my head around is the aspect ratio when you're playing local multiplayer. For some reason, it doesn't fill the entire screen area, which is an oversight that I'd love either a damn good explanation for or a patch to fix it. On the audio end of things, the game is absolutely superb. Being in a bubble shield sounds incredible in surround sound, and every gunshot and explosion is crisp and realistic.

I'm so glad that Bungie gave me a reason to praise them. I wanted a comprehensive multiplayer experience like this, and they've provided a better one than I could ever imagine. Halo 3 more than redeems the shortcomings of its two predecessors, and the sounds of the game will surely be pouring out of millions of living rooms for years to come.

When was the last time you heard a real gunshot or explosion?? I smell a newb