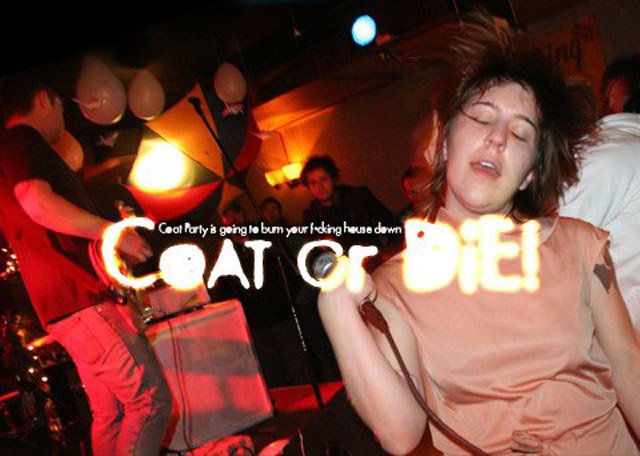 Guest hosted this week by Gavon Laessig Coat Party exudes enough vim and vigor to melt the eyes out of your sockets. This Lawrence dance-rock foursome-especially when performing live-will mash punked-up Gang of Four style rhythm, Gameboy soundtrack atmospherics and dual shout along vocals all over your face! Kyle Gowdy ...

Coat Party exudes enough vim and vigor to melt the eyes out of your sockets. This Lawrence dance-rock foursome-especially when performing live-will mash punked-up Gang of Four style rhythm, Gameboy soundtrack atmospherics and dual shout along vocals all over your face! Kyle Gowdy alternates between synths and guitar with equal disdain for your tinnitus, Nicholas Kotlinski smashes his drum kit into paste, and Alison Cain tag teams vocals with Cassie Peters. Get too close to Cain and Peters while they're whirling like dervishes and howling about shooting lasers from their fingers, and you're liable to get some inadvertent groin trauma in the vein of the prank from which Coat Party derives their name. They've released several EPs and 7 inches, are putting the finishing touches on both an upcoming single and album, and a fall tour is gestating. While Alison Cain is on sabbatical in Japan, Cassie Peters, Nicholas Kotlinski and Kyle Gowdy joined us for a very bleary-eyed conversation the morning after KU's Final Four victory.

lawrence.com: We really appreciate you guys joining us today, especially considering it's the day after the momentous KU victory. Who else here besides me is hung over?

Do you approach your live shows and your studio recordings differently?

Kyle Gowdy: The only things we've ever recorded are basically our live sets. There's been no attempt to recreate anything, although they're two separate things. There's a whole visual aspect to live music that's really important for us, which might be a little bit of compensation for our studio recordings.

Nicholas Kotlinski: There's no real difference. We'll add other instruments in the studio just to layer it, but it's pretty much setting up our mikes and playing the songs as loud as possible.

Cassie: Yeah, I think the electronic sound that was the beginning of Coat Party is something we've tried to include in releases rather than recreate live. We find that people really enjoy listening to our electronic songs at home or at parties, but when we're live it's easier to engage with people-and it's more fun-to play the more rock stuff.

Kyle: Plus, I think it's bullshit to press a "Play" button and then jump around. If we were to play our electronic stuff, there's no way to recreate it. I don't have four synthesizers. It's all on a computer and there's no way for me to play it live. It would be a total sham.

When last I saw you guys, you were playing at the Jackpot Saloon in the crowd rather than on stage. Is that something you generally aim for, or is it just easier to set up your gear on the floor?

Nicholas: It's awesome. Luckily the people at the Jackpot have been really nice and let us do whatever we want so far as setting up.

Kyle: Yeah, it's cool. It makes it a lot more fun for us. We're also probably the least complain-y band that exists. Whatever the sound guys tells us to do, we'll do it. It takes a little bit of extra work to play down there because they have to throw cables down on the floor. I think that playing on the floor is really important for the crowd aspect. It's just more energy-and you can touch the people, which is weird.

Is there ever a fear-especially for you and Alison, Cassie-that while you're ping pong-ing off of one another in the crowd that you'll collide with the audience, or that they'll f*ck up your equipment?

Cassie: It's happened before. Sometimes it's pleasant and really fun knowing that you might get injured. It's worth the risk. I'd say it's more fun to have people possibly injuring one another than standing so far away.

Kyle: We played a house show in Kansas City, and I think my amps got unplugged four times.

Nicholas: That's the best example. And at the same party, some kid who was causing trouble knocked Alison over into the drums. She landed on the cymbal.

Kyle: Yeah, that guy is an asshole. He has a big fro and wears a stupid scarf. He goes to the Art Institute and is a total dick. If you see him, flip him off...

Cassie: He's injured me at shows just by being larger than me and falling over on me a lot.

How did you guys come together as a band?

Nicholas: Kyle started out making really dorky songs on his computer. They were really good, but they were self-recorded with computer beats and guitar. Then he added Alison on vocals. We had been in a band previously without instruments, it was all electronic, but then we started playing drums and bass. We just wanted to start a simple band.

Kyle: We wanted to do dance-punk, like "Let's make a party band! Do a disco beat and get the bass line goin'!" Then Cassie came in on vocals later and that was a good addition, too.

Is there a mission statement for Coat Party?

Nicholas: I wish we had a cool mission statement.

Kyle: "Coat Party is going to burn your f*cking house down." That's it.

Brad Shanks of Blood on the Wall said that you guys never smile when you perform. Is that scurrilous trash talk?

Cassie: I never thought of it before.

Kyle: That's totally not trash talk. The fact that Alison and Cassie do not smile is pretty f*cking awesome. It's like Pat Benatar-have you ever seen Pat Benatar smile? Exactly. Maybe The Bangles smile, but f*ck The Bangles.

Fuck the Bangles??? Really?! If these dorks don't wake up and smell the real flava, the only thing they're gonna be burning is bandwidth. Best,Don Kirshner