The Reinvention of Greensburg

Last May, immediately after the tornado hit, talk of rebuilding Greensburg began.

One week after the small town was destroyed, Daniel Wallach, who lived 35 miles northeast of town and had founded a number of nonprofit organizations over the years, presented to city leaders a concept paper he'd scrapped together and offered to help lead a rebuilding project focused on environmental sustainability.

Wallach, now the director of Greensburg GreenTown, is amazed at how the city has progressed in close to a year. "What's been accomplished in a year," he says, "is really nothing short of remarkable."

The national spotlight, instead of fading after the story had been told and the president's helicopter had flown in and flown out, has not left, but rather shifted its focus from a tale of destruction to one of building what's been called a "model green community," almost from scratch.

(Green)town Benefit for the Green Reconstruction of Greensburg, KS

Last week, one day before talking with lawrence.com, Wallach was interviewed by the London Observer, CNBC and Agence France-Presse (the French AP). The New York Times Magazine is soon publishing a story and Time did one recently, as did NPR.

"The concept of a model green community is so appealing, and the timing of it is so perfect, that people literally from around the world are hanging on everything Greensburg does," Wallach says. "It's a source of fascination and inspiration for lots of people out there."

The town has become the first in the United States to require that all public buildings over 4,000 square feet conform to the highest Leadership in Energy and Environmental Design (LEED) standards developed by the U.S. Green Building Council-26 buildings are being constructed this way. It's also hoping to attract jobs in environmental industry, and is looking into building a green industrial park, in addition to building energy efficient homes.

Getting citizens of the largely conservative community on board with the green initiatives wasn't easy, Wallach says, but once the image of hippie tree huggers was displaced, people found that thinking green can be a much easier fit for a rural community than for a city, making Greensburg a perfect testing ground for a sustainable way of life. 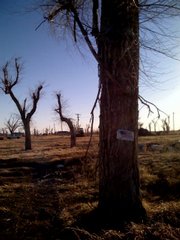 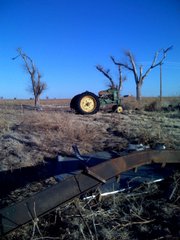 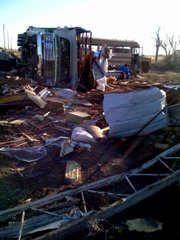 By reinventing itself as a "model green community," the town realized the opportunity to jumpstart its stagnant economy, says Stephen Hardy of BNIM, the Kansas City architecture firm hired to develop the city's master plan.

"Everybody knows rural economies are not doing well across the country," Hardy says. "So an area of focus for us, now that we've done the thinking about the physical plan of the city, is to come up with strategies to insure that there is a growing economy, that there are jobs for people in Greensburg. And not just any kind of jobs, but jobs that people's children would be willing to come back for."

BNIM is on track to finish its planning work in the next three or four weeks, Hardy says, and the bulk of the rebuilding should be completed within four years. Meanwhile, many citizens are still living in FEMA trailers and dealing with unimaginable losses. But with the economy poised to take off, everyone is hoping the town will be going strong in a few years.

"It used to be corporations were interested in helping Greensburg just out of the goodness of their hearts, I guess you could say," Hardy says. "But now that it's developed the reputation that it has, we're starting to see people wanting to invest because they want to associate their name with Greensburg."

Lawrence eco-journalist Simran Sethi, who has made a number of trips to Greensburg for "The Good Fight," a documentary series premiering this month on the Sundance Channel, is impressed by how far the town has come. Despite the courage of the citizens in the wake of the tornado and early talk of bringing the Greensburg back, few would have expected the dedication the town has displayed in remaking itself.

"A year ago," Sethi says, "you could not have expected that Greensburg, Kansas, would really, truly be one of the greenest cities in America."