How does one become a college DJ? By proving beyond a shadow of a doubt you embody that rare nexus of skill sets in which elitist musical tastes and poor communication skills collide?

"The easiest way to become a college DJ is to know a college DJ. It's like joining the Masons-one day you get tapped and you're in. Although it's less 'secret handshakes' and more 'half-working headphones.'"

Is being a DJ the only way you can get people to listen to you? Is it the fulfillment of an adolescent power fantasy-perhaps the closest you can get to Caesar-like man-God status?

"I wouldn't know if people even listen to me now. Community-based radio isn't the best place to seek validation, because even if people do listen to you they'll never recognize you. Then again, when I first thought I'd get on air I didn't know that, so I guess I was expecting the 'Caesar-like man-God' fame."

"Stealing is wrong. But free stuff is basically why anyone takes any job." 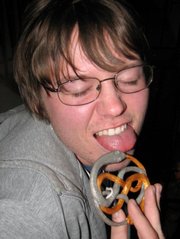 What's the best way to blow off someone who calls in to request 30 Seconds to Mars-pretend you can't find the album or insult them on air for being sub-human?

"I've never actually blown anyone off. I once got a call from a guy that wanted to talk to me for 10 minutes because I played a Buzzcocks song. He told me how he got kicked out of a band when he skipped practice to go see them. I didn't really know what to say so I gave the phone to my friend in the studio."

Does anyone really listen to jazz? Defend your eclectic and multicultural programming schedule!

"I hear there's some kind of jazz guru in town that calls up to talk to the Jazz in the Morning DJs. So that's at least one person, and if any of our programs meet the needs of one person, we'll keep them on.

Since the Lazer collapsed into a crap heap, have you guys gone mad from unchecked power?

"What's the 'Lazer'? Our role in the community is to 'teach' about the exciting world of music you most likely don't want to hear if you're older than 35."

Seriously, are you guys required to talk with a mouth full of cottage cheese while sitting in a plastic bubble?

"It's more oatmeal and tin cans."