To East Lawrence townies, Haskell Square is affectionately referred to as "The Vice Mall"-a one-stop-shop for all of your porn, liquor, parole, Payday Loan and comfort-food needs. The salmon-colored strip mall is about to undergo its most curious experiment to date when members of the Fresh Produce Art Collective open a gallery on the southwest corner (adjacent to Haskell Liquors). Dubbed the DotDotDot ArtSpace, the unlikely simmering pot will make its grand debut April 19 with a happening involving Wayne Propst's painting machine and nine other Fresh Produce artists who pooled their lunch money to lease the space for a year. We visited with Propst and Fresh Produce artists Whit Bones and Brandon Mateer to discuss the DotDotDot and Haskell Square's various vices. East Lawrence teamster James Grauerholz also popped in to share his thoughts.

What do you know about this particular strip mall, Wayne?

The Cross Town Tavern is a place where you can improve your mental health by a huge measure. You go there on Sunday afternoon at 4 : After one or two drinks you'll realize that whatever the fuck you thought was wrong with your life is not that bad.

When I pay in cash at the convenience store, the guy always smiles at me that I have the money and I'm actually buying a full six-pack of something.

On the other hand, I honest-to-god wouldn't want to be anywhere else. This has got everything we want. It's perfect. If we want to hang some panels and increase our wall space, it's going to be very easy to do. The only thing I wonder about is: Is there a shithouse?

Whit Bones: Nope. It's in the gas station.

How did this all come about?

Bones: This location kind of came to us. We were approached by the owner of the strip mall in conjunction with James Grauerholz (executor of the William S. Burroughs estate). There was an open space and an interest in putting something new and different in there, and art was an obvious direction to go. So we worked with the owner of the strip mall and he worked out a pretty nice deal for us and built us a nice space.

It was an obvious next step for Fresh Produce to have a gallery. We looked at some places that were far beyond our budget and size constraints; some of the old warehouses in east Lawrence : We decided that this location was a great location because it's such a bad location. 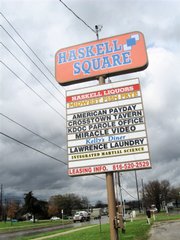 There's already quite a bit of interesting culture happening in this strip mall. A gallery is really just going to be adding to the mix, don't you think?

Bones: Yeah, I think you're right : Another ingredient to this weird souffle.

Do you ever party at the Cross Town Tavern?

Bones: Not yet, but I'm sure there'll be plenty of it.

Have you ever taken out a Payday Loan or visited your parole officer here?

Bones: With the financial burdens that we're about to undertake, I think the Payday Loans will be good friends of ours. Miracle Video is a place we visit from time to time, and I've had breakfast at Kelly's quite often. We look forward to making friends with all these new people. We're moving in and these are our friends and our family now.

So a couple years from now, this will be like the Crossroads District of Lawrence.

Bones: You know, I hate to get ahead of ourselves, but I can see that happening: property taxes going up, art galleries all over the place-very commercial, kitschy stuff. Who knows : it could go either direction.

We're going to split the space in half with some moveable walls. The front half is going to be our white box gallery for solo shows, installations and curated shows. Whatever the artist wants for that month they're going to be able to do. It opens up our opportunities past the canvas : It'll be like walking into a piece of art.

How many people are involved with the ownership of this gallery?

Brandon Mateer: I believe 10. Before this idea came about, I was coming over to the liquor store all the time and just wishing that there could be a place where people could see art and buy booze and just be activated. This came about and I was very excited about it. It's super cheap, so that right there was the hook, line and sinker for me. Per month, each member is going to pay $50, so that ain't too shabby.

Bones: It's cheaper than my phone bill.

What type of work will you be showing at the opening?

Propst: Mostly we'll have these paintings that are generated by the painting machine. To a great degree, it's a performance. I'm hoping we will have many Fresh Produce artists running the machine. There's going to be 20 or 30 jobs at least. We can probably make up jobs for anyone who needs a job. We also need salespeople.

Could you tell us a bit about the origins of the painting machine?

Propst: I remember I suggested it to a woman who is a real artist who lives in California. She's one of these people that knows she's super-cutting edge and she really keeps up. For example, I said, "I'm gonna run some Barbie Dolls though my bandsaw." She stops me and says, "You fuckin' idiot-there's a billion f*cking Barbie shit things all over the world. Why are you even bothering to jack with something like that?" Then I said I was going to do something with condoms and she said, "Propst-there's a condom museum," of course in Germany. Then I said I was going to make a painting machine and she says, "The first painting machine I ever heard of was built in 1873."

Part of what's happening is that to think of something that's "new" and "fresh" would be pretty tricky. I got interested in how the thing would work; the mechanical parts of it.

James-perhaps you could share a couple thoughts on this strip mall and the change that's come over it.

James Grauerholz: Haskell Square was built in 1971 and it's had a checkered history. I've been living near here for 20-plus years and I've taken interest in this thing. It underwent a change of ownership in the last 12 months and the new owner is a tremendous guy who's going to bring new life to this deal : I said, "What you need is an art gallery." He had no idea how that would work, and I said, "Well, there's this group of young artists here in Lawrence who are very organized and active." I introduced him to some of the key people, and it's to his credit that he has a vision of bringing a different demographic-younger people who don't know this side of town. If there's one thing that James Grauerholz is about, it's growing the East Side for the 21st century-as not a slum of leftover bottoms from the 19th and 20th centuries, but a place that's happening : It's not the edge of town anymore, people. This is center city in today's Lawrence. Â»