A 5.2 magnitude earthquake with an epicenter in southern Illinois was felt as far away as Lawrence last week. No one was severely injured in the early morning tremor and property damage was minimal. *:While the quake could be felt in Lawrence, no one was concerned since it was assumed that Mark Mangino had just fallen out of bed again.

Kansas players Brandon Rush, left, Darrell Arthur and head coach Bill Self talk with media members during a news conference Thursday in Hadl Auditorium at Kansas University. Both Rush and Arthur declared their intentions to enter the NBA draft.

KU junior guard Brandon Rush and sophomore forward Darrell Arthur announced last week they will enter the 2008 NBA Draft. Rush will definitely not be back for a senior year with the Jayhawks, but Arthur may return depending on what spot he expects to draw in the draft. *:Rush and Arthur explained at a news conference that they had accomplished what they set out to achieve at KU and hope to take their athletic and professional lives to the next level. "Oh," added Rush, "and the ridiculous gobs of money that will be thrown at us by just sitting on an NBA bench ain't too shabby either."

THE TWITT OF HABEAS CORPUS

UC Berkeley journalism student James Karl Buck recently alerted friends and colleagues that he was jailed by Egyptian authorities by using the popular cell-phone blogging service Twitter. After being jailed for covering a factory workers' strike, Buck sent the word "ARRESTED" out to his Twitter network, which then alerted the U.S. Embassy. He was freed the next day thanks to pressure from the Embassy. *:The Egyptian government retaliated by imprisoning Buck's World of Warcraft centaur, prompting a massive civil rights rally in Second Life. In a tragic turn of events, Buck's LOLCat translator has been beheaded on Flickr video. 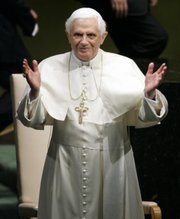 Pope Benedict XVI made his first trip to the United States as pontiff last week, being met by President Bush at the airport and hosted at the White House. He also spoke at the United Nations, said a prayer at the World Trade Center memorial, met with victims of clergy abuse, and capped his visit by holding Mass at New York's Yankee Stadium in front of 57,000 people on Sunday. *:The Mass had to be held at Yankee Stadium in order to seat everyone who had been molested by a Catholic priest in the past 50 years.

A roll of film allegedly showing Marilyn Monroe performing oral sex on an unknown man was reportedly sold at auction for $1.5 million to an anonymous bidder last week. It's rumored that FBI founder J. Edgar Hoover was convinced the man in the film was either President John F. Kennedy or his brother, Robert F. Kennedy. *:Conspiracy theorists claim that both Kennedys are in the film, since the particular direction in which the woman's head snaps back suggests a "second shooter."

Aliza Shvarts, an art major at Yale, claims to have artificially inseminated herself multiple times while periodically taking abortion-inducing drugs to produce miscarriages for her senior art project last week. A Yale spokesperson later said Shvarts had not actually given herself abortions, that it was "creative fiction" for her performance art, but Shvarts stands by her initial claim. *:Medical experts who examined Shvarts' piece knew that it could not have originated in her uterus, since it was apparent-as with most performance art-she had pulled it out of her ass.

A woman reads the latest on the Delta-Northwest merger on a Northwest flight at Detroit Metropolitan Airport.

In yet another sign of weakness in the struggling airline industry, giants Delta and Northwest announced last week they intend to merge in order to offset skyrocketing fuel prices. The new carrier would be the largest in the world and be known as Delta, but first has to win congressional approval. *:Delta and Northwest lobbyists touted the benefits of such a merger, claiming it would allow passengers to have their crotches probed with a wand and their luggage rerouted to Marrakech with twice the efficiency.

The Drug Enforcement Agency last week issued a warning about candy-flavored cocaine after more than a pound of the infused narcotic was seized in California recently. The DEA is concerned by the sophisticated new techniques with which dealers are attempting to appeal to children, making cocaine in flavors such as strawberry and cinnamon. *:Some other flavors include "Frosted Flake," "Bogota Blow Pop," and the not quite as successful "New Coke."

MAUL YOU CAN EAT

Following famine outbreaks and food riots in parts of Africa and Asia in recent months, the United Nations this week called for action to curb the potentially catastrophic effects of exploding food prices around the world. UN Secretary General Ban Ki-moon blamed the spike in prices-83% in the past three years-on a range of factors, including climate change and the rise of biofuels such as ethanol. *:The dire warnings were received well by agribusiness giant Archer Daniels Midland, a major producer of corn for ethanol, which immediately released a new ad campaign touting the UN findings. "Ethanol: Killing the environment AND brown people-suck it, Gore!"

Sunflower Electric Corporation's coal-fired power plant rises beyond a pile of coal as it churns out electricity in Holcomb, Kan.

Gov. Kathleen Sebelius last week vetoed a bill allowing two coal-fired power plants in southwest Kansas, the second time she has done so in as many months. Sebelius objects to the adverse environmental impact of the plants and the bill's attempt to strip the governor's cabinet of regulatory authority. *:In particular, Sebelius was concerned by the Legislature's efforts to convert the governor's mansion into a nuclear waste storage facility and limit her authority to "making us sandwiches and babies."

The Kansas Board of Regents voted last week to prohibit weapons on the campuses of regents universities, including the University of Kansas, and require criminal background checks of new hires. The move came on the anniversary of the Virginia Tech campus shootings. *:When reporters asked irate Second Amendment advocates who support guns on campus if they would also support concealed weapons in clubs frequented by minorities such as Last Call and the Cross Town Tavern, they were shot at.

In the last week of campaigning before the Pennsylvania primary, Hillary Clinton and Barrack Obama participated in an ABC-hosted debate that was widely panned by supporters of both candidates. Critics charge that moderators Charlie Gibson and George Stephanopoulos spent an inordinate amount of time on "gotcha" questions regarding such topics as Obama not wearing a flag lapel pin and Hillary Clinton's exaggerated account of her trip to Bosnia. *:Stephanopoulos ended his questioning of Obama by mumbling, "An elitist-Muslim-communist-homo says what?" Gibson wrapped up his time with Clinton by splashing holy water on her face and shouting, "The power of Christ compels you!" Â»