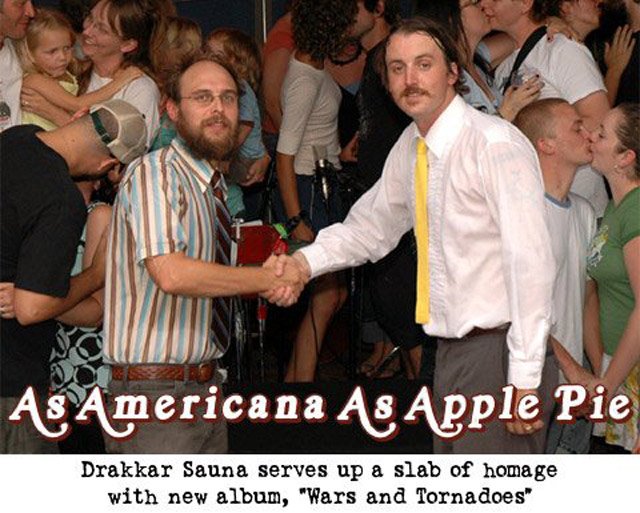 The music of Drakkar Sauna is just as heartbreakingly pretty as their hard-living, country-roots forebears-although the Lawrence duo is far more stable and far less dead than some of their musical heroes. It's in tribute to one of these troubled influences, The Louvin Brothers, that Drakkar Sauna has recorded its new album, "Wars & Tornadoes." Jeff Stolz and Wallace Cochran found some time to chat with us at The Merc about this album of Louvin Brothers covers in between Wallace making sandwiches and Jeff shopping for ground chuck.

This episode guest hosted by Gavon Laessig. Putative cousins Wallace Cochran and Jeff Stolz unfortunately don't have a morphine habit or syphilitic dementia to fuel a family rivalry. Despite being far more stable and far less dead than some of their musical heroes, however, when performing as Drakkar Sauna they ...

lawrence.com: Who are the Louvin Brothers and why have you chosen to lazily plagiarize their music?

Wallace Cochran: Like a lot of brother harmony duos, they had a falling out that ended their professional careers. They came at the end of the run of close harmony brother duos-the Blue Sky Boys, the Delmore Brothers, the Monroe Brothers, the Stanley Brothers-and almost all of them had a falling out. The Blue Sky Boys never talked to each other again after they parted ways. One of them just died in 2003, and they hadn't spoken to each other in almost 50 years. There's a tradition in country and bluegrass acts doing songs that pre-exist. The Louvin Brothers did a Delmore Brothers album, and so we do a Louvin Brothers tribute album.

So there's a longstanding tradition of plagiarism in the country community, then?

Wallace: It might be lazy, but it's not plagiarism. That's a different definition.

Even though you're not brothers, as a harmony duo, do you share any of the internal conflict that split the Louvin Brothers apart?

Jeff: Not yet. But we probably will at some point part ways and never speak to each other again.

Wallace: They had 20 years of professional singing. We've only had five. We have time.

There doesn't seem to be much Oasis style, Gallagher brothers bitterness between you guys-you actually seem pretty mellow.

But there's the potential that you're riven by tension over shared women, record profits and ether addiction?

Jeff, what would you like to say about Wallace behind his back while he's out of the room?

Jeff: Oh boy-many things, but I'll stick with the positive. He is a masterful sandwich maker. He's in high demand. He also makes a fine apple pie, however I think his secret is Crisco, which I'm trying to eliminate from my diet. Cholesterol. I still love apple pie, however.

Is your healthy living antithetical to the Louvin Brothers' lifestyle? Is it kind of a cop out that you're not dead by 25?

Jeff: I don't think so. A lot of country people live a long time despite their unhealthy lifestyles. I wouldn't really consider eating apple pie healthy, though. The Louvin Brothers ate a lot of apple pie. Ira drank a lot of whiskey.

Do you try to replicate that lifestyle in your hard-bitten touring persona?

Jeff: I wish I could drink more whiskey, but I have an aversion to whiskey.

Does it make you mean?

Jeff: No, it makes me throw up. I'm envious of people who can drink a lot of whiskey. It always looks good.

Wallace has rejoined us. Wallace, does apple pie go with whiskey very well?

Wallace: Sure. I've seen apple-cured whiskey, so I imagine apple pie and whiskey-especially bourbon whiskey and its high sugar content-would be good.

Ain't nothin' better than a good yam! You're already working on your next album-what will you be recording, and how will it differ from "Wars and Tornadoes"?

Wallace: It differs very little. It will be a covers record as well.

Wallace: He'll be doing the arrangements.

I applaud you gentlemen for bringing his undersung work from "Alien Nation" to wider attention.

Wallace: It was pretty widely seen-they turned it into a TV show, after all.

Why should people invest their time and money in "Wars and Tornadoes"?

Wallace: I would say, primarily, because you get to hear Paul Schmidt lay down the bass and Kory Willis play electric guitar and mandolin. Betse Ellis plays fiddle and Sean McEniry plays drums.

Wallace: They're all great players and are worth hearing any time-probably more so with their own groups, but since we're not in those groups, please listen to them with us.

Wallace: Very little. A drakkar is a viking ship. Also, it's Swedish slang for "tough guy."

So would you classify your sound as "world music"?

Jeff: Yes, Scotch-Irish-African funk, as we like to say. It's funny, somebody asked me how to pronounce "sauna" the other day. That was a first.

Wallace: That's interesting. Would either of you like a sandwich?

Why, that sounds delicious!