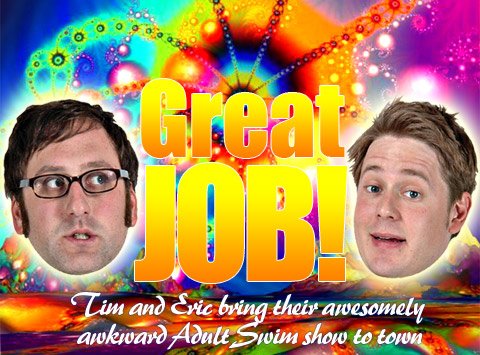 Tim Heidecker and Eric Wareheim met as film students at Temple University in Philadelphia, where they discovered that they really didn't care all that much for being film students and started making videos just to amuse themselves. A typical example of this early work features the duo dressed up as Batman & Robin, taking massive bong hits, and flying over the ocean with John McCain at their side.

"Tim and Eric Awesome Show, Great Job!" jumps mercilessly from commercial parodies for products such as "The Poop Tube" to synth-laden musical numbers performed by a hideously deformed and vomiting little boy, with a whole host of slightly creepy social satire and spasm-inducing montages in between.

They're somehow going to be performing all of this live in Lawrence. Tim Heidecker and Eric Wareheim took some time out from filming their third season to uncomfortably disseminate misinformation with us about the "Awesome Tour 2008!"

If you've seen "Tim and Eric Awesome Show, Great Job!" on Cartoon Network's Adult Swim, then you're well acquainted with how virtually impossible it is to describe. Imagine sketch comedy in the vein of "Mr. Show," Andy Kaufman's confrontational brand of anti-humor, and video effects that look ripped from a ...

Eric: Absolutely. It's going to be kind of a personal side. The opening of the set, I start with about a 60-minute stand-up routine and monologue. Then we take a half hour break, and then Tim Heidecker comes out for another 60 minutes of stand up. So it's very stripped down-very personal.

Tim: (European accent) In the third part, Eric and I talk to each other on stage about who we are-how to be better people for us.

Tim: (European accent) And of course there will be videos as well. Showing new things from Season 3.

How is Season 3 coming along?

Eric: We just cut some stuff together yesterday. One thing is called "Chubs." It's a music video about getting half boners when you see a woman that turns you half-way on.

Were there stunt "chubs" or did you provide your own?

Eric: Oh, we don't do any stunt work when it comes to penis.

Along those lines, will the Poop Tube be coming on tour with you?

Tim: (European accent) Which is this? No, I don't know.

Eric: He said the Poop Tube. It's the tube that comes out of your butt.

Eric: It's that commercial we did-the viral with the poop jokes.

Eric: No, not Steve Brule. It's a guy and he goes to the park and there's a kid version with hamster tubes.

Tim: (European accent) Hmmm-no. It does not sound funny.

Transplanting yourselves from Pennsylvania to Los Angeles-did it have any impact on your art?

Eric: It did. Have you seen the ads we did for "Shrek the Third"? You move to L.A. and you see a lot of movie stuff-a lot of animation. A lot of marketing-clever marketing. So that's inspired us creatively. We do a thing about Papa John's on tour, where we're advertising for Papa John's for free just because we love their product so much. We're just more passionate for certain products, you know?

Lawrence is one of the few shows that hasn't sold out on the "Awesome Tour"-what do you want to say to our audience to whip them into shape? (Note: the show has since sold out-ed.)

Eric: Lawrence, get to the show!

Tim: Just get with it-it's not that hard a thing to do. How many people come to that town to perform from Adult Swim, anyway? None, buddy.

Actually, Dethklok from "Metalocalypse" was here.

Tim: Yeah, but come on-that's a different audience. We're not talking about imbeciles.

There's probably some overlap between the "Tim and Eric" and "Metalocalypse" audiences.

Eric: I hope not.

Tim: Yeah, you're right-but who cares? You know, if we have a shitty show in Lawrence, it's not really a big deal for me. We're playing big markets like New York, Chicago and Los Angeles. Those are the markets we're very concerned about. Lawrence is just a pit stop-a place to take a crap. (pause) Just kidding.: Hey, where's the best place to eat in Lawrence?

Eric: What's a Kansas treat? What do you eat there-corn?

Eric: Are there many Latinos there?

Tim: Yeah, with all of those quesadillas you keep mentioning, it sounds like there's a high Mexican quotient.

No, this is one of the most homogenous and lily white towns you'll ever be in.

Tim: Oh, looking forward to it!

Eric: What are the girls like out there? Free spirits?

Actually, you do have a nice blend of corn-fed farm girls and bra-less hippies.

Tim: (sighs) I'll get to second base with somebody.

I can guarantee it-there's always somebody passed out in the green room at the Bottleneck. Â»