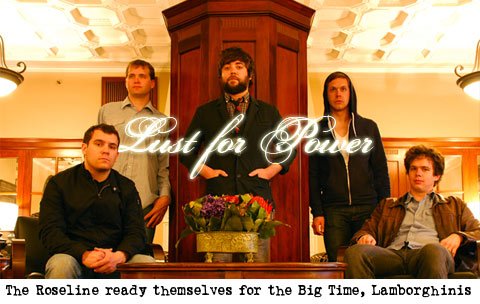 After a decade in Lawrence, The Roseline have found a way to take the change inherent in a revolving-door college town and make it work to their advantage. Lineup changes, marriages, financial stress, and a little bit of old-fashioned libido might sound like ingredients for some pretty angsty listening, but instead the Lawrence band washes it all down with a sweet slide guitar and a hook-no screams here. For its second release, "Lust for Luster," the band maintains its ease and rootsy Gram Parsons-esque flavor, but experience finds them taking fuller, warmer turns than their 2006 debut. Behind some of the changes is Ehren Starks (keyboards/percussion) joining Colin Halliburton on songwriting duties, as well as the full-time duties of Jeff Jackson (guitar) and James Piller (drums). Previewing the new album, Halliburton, Starks, and bassist Paul Winn joined lawrence.com amid gab of finances, label shopping, and to whom KU really owes its tourney victory.

After a decade in Lawrence, The Roseline have found a way to take the change inherent in a revolving-door college town and make it work to their advantage. Lineup changes, marriages, financial stress, and a little bit of old-fashioned libido might sound like ingredients for some pretty angsty listening, ...

lawrence.com: So what's this about a new album?

Starks: The first record was a fly-by-the-seat-of-our-pants sort of thing. This one was a lot more deliberate and took a lot more time to think about. It's our second studio experience. We definitely learned a lot from the first one, so hopefully it shows. Winn: You see, this is the second in a three-album trilogy. You'll really get into the band on this one, where the first one was just kind of an introduction.

Halliburton: Then it's off into the distance in our Lamborghinis.

You guys seem to have pretty complicated feelings about money-at least that comes across on the record.

Halliburton: Yeah, it's a weird theme that ran through this record-being at this weird mid-20s age where you make these huge life decisions. Whether you're gonna pursue making skrilla or this humble little country band or have them coexist.

Starks: Basically Colin and I have both been in school for roughly eight years. Halliburton: We were just waiting for the 'Hawks to get that championship.

Starks: I realize that is exactly why I have taken that approach. It paid off.

So what's the take-home message here?

Halliburton: I don't know-everything? I think it's a record you could hum along to in your car, listen to at home, take a nap to, dance to, dissect the lyrics, or not give a shit about the lyrics.

What's the proverbial 'next step'?

Winn: The future is uncertain.

Starks: Everyone is kind of growing up. Finishing school, getting married, babies. Halliburton: We'll probably just move to L.A., get some tattoos and hit up that open mic at the Roxy. Land that deal.

You're shopping for a label, right? How's that going?

Halliburton: [laughing] It's basically like sending out a prayer.

Winn: We were joking earlier that we might have as good of a chance attaching a CD to a balloon and sending it out there.

Halliburton: It is weird how the MySpace era has changed shopping your music. There's a give and take because there are four billion bands out there who you can hear at any time, but there are also people with record labels or whatever that are paying attention to bands on MySpace.

Starks: I feel like it's just magic and ambition, but ambition only goes so far. You can send out 100 unsolicited CDs and not hear anything back, or just hear back from the label that's the guy in his bedroom that has no budget.

Winn: MySpace has been really cool for us. We sold out of our first album, basically. I'll send a CD to Germany and one to Paris. It's cool to think that people in other countries are listening to your music. Even if it's just a handful of people, it's great. Â»