Jill Ensley, student and Jill-of-all-trades-artistic who likes "paintin' n' writin' an' readin' an' excessive use of apostrophes"

Does being single past a certain age in Lawrence add an extra layer of difficulty to dating? I feel as though being in my late 20s has turned my wang to kryptonite in this town...has your lady junk turned radioactive as well? Is it time to organize a cougar hunt?

"Screw you and your late 20s. I'm 30 and the layers of difficulty for a 30-year-old female in a college town, well-it's like baklava, there are so many layers. A bitter, bitter baklava. Also, I wasn't going to mention that green glow emanating from your pantular region, but now that you mention it..."

Where's the best place to pick up dates? Bars? Libraries? Wells Overlook Park behind the men's room after dark?

"I've had some luck on the internets, actually. If you want a good laugh, the best place is The Red Lyon. The past two times I've gone have solicited such pick-up gems as 'Do you ladies play Golden Tee?' and a rather drunk gentleman screaming 'Fail!' over and over at my friend. I think he thought he was being charming. And where is this Wells Overlook Park-how do I get there?"

So is online dating the brave new frontier in humiliation and disappointment?

"It is. I've seen more penises, or 'penii,' than I care to shake a penis at. It's amazing, really, how many people don't know how to take a flattering picture of their junk. Maybe this is a niche market? I could put my photography skills to good use. But seriously, you get it all really-the social experiment, the time-wasting, the ability to go 'Awww' to someone's face without them seeing it. As far as tips go, I'd stay away from Craigslist. I know this seems like an obvious statement, but I learned the hard way. If you're poor and unwilling to pay, I'd go with OkCupid. And this one's for the gents-try not to seem too desperate. You may think you're being sensitive or honest, but no one wants to get picked up on just because you're a lonely, broken man. Don't message someone repeatedly-twice, with a week or so in between, is good. Also, be up front. If you don't know what you want, say it. If you do, say it. And don't proclaim to be a 'nice guy.' That's a sure sign of an asshole-in-training. This may seem confusing, but if you're a nice guy, you don't have to tell someone this. They'll see it. I'll take honest semi-asshole over 'nice guy' any day. And if you're using one of those 'naughty' personal sites, be aware that your co-workers may be on there as well. So save yourself some awkwardness and think about that when sending someone a photo of Mr. Stiffy. Go with a nice chest shot-unless you look like Chewbacca. It gives an idea and you still maintain a degree of anonymity. Just sayin':" 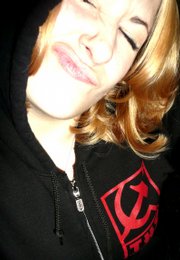 As a member of the fairer sex, what are you looking for in a piece of disposable man meat? Better yet, what are you NOT looking for? Provide our lonely, sweaty readership with some hints as to why they're lonely and sweaty.

"I think you've just answered that for me. But, personally, I'm not looking for someone who still lives with their parents. Sorry, I don't really care what the reason is. I've now made a hard and fast rule to avoid anyone 25 and under, thus making it more difficult to find anyone in town. Living in Topeka is not a good sign either. Seriously, you have to consider why someone would be a quarter-lifer, or slightly above, and still be living there. Those recently out of a relationship are obviously a bad sign too, especially if they've really never been on their own. So, I guess it comes down to someone who is independent, somewhat mature, non-Republican, and knows that the Capital City is really just the 8th Gateway to Hell. Also, special note to firefighters-just because you wear that uniform and risk your life, doesn't entitle you to 'teh sex0r.'"

Should men always take the initiative, or is it finally considered appropriate for women to drop GHB into men's drinks? What's the protocol in this crazy post-feminist world?

"That's a tricky question, since now you're getting into personal taste, self-confidence, and ability to locate and purchase illegal substances. I can only speak from experience, but I rather like for the man to take the initiative-unless he's ugly. That mutual eye-connecting thing across a room is nice, but a rarity. I think most ladies like to be pursued though, but I'm sure some of the gents would like the tables turned as well. My problem is that unless there's the devil's brew in my system, I'll appear disinterested. So, yeah, more women should approach men. We're just not as good at taking rejection as you are."

Drunken hookups-wait until you can get back to somebody's house or strike while the standards are lowered in the dumpster nook behind Replay?

"Dumpster nooks are reserved for familiarity and spice, not first-timers. If you're gonna get it on, why not wait until you can minimize your chances for infection. Why get the clap and have to get a tetanus shot as well. Though I guess it would be one-stop shopping. Remember kids, always have a condom-that means you too, ladies. So, yeah, always aim for the house, and if it's his house, make sure someone knows where you are and that there are no small blinking red lights in his bedroom, if ya' know what I'm sayin'. Yeah, you've seen the internets, you know what I'm sayin'. I mean, really-I'm amazed at the amount of amateur porn these days."

What's the perfect date? Does it involve Old Style?

"Pefect date? Wow, that's a tall order. Let's go with a good date, since perfect implies something out of a romance novel or soap opera where you board a plane for dinner in Paris. A good date is being on-time, somewhat planned out, and being treated to dinner and good conversation. A movie is good, but something more original is better, like climbing on rooftops or a donkey show. A kiss is a good end to a first-date, if there's a connection. Otherwise, a huggin' will send the right message. And never tell her you'll call her when you have no intention. She probably thinks you're a twat anyway and knows it's just a line."

Oh hell, it's all about me this issue, isn't it. Hot damn, whatta fine photo.