While Lawrence prides itself on supporting the arts, gallery closings and less than stellar support for the art auction have caused some to wonder how deep that commitment runs. But the success of grassroots groups like the Fresh Produce Art Collective and the Ladies of Lawrence Artwork (LOLA) proves that artwork of all kinds is still very much in demand-artists may just need to find new ways to reach buyers.

This Saturday, the artists behind LOLA mark the fourth year of their specialty art sales. Changing it up from sales in hair salons to galleries to restaurants, the nine artists currently part of the collective come together again on the eve of one of that most important of lady days (don't forget your moms on May 11!).

While Lawrence prides itself on supporting the arts, gallery closings and less than stellar support for the art auction have caused some to wonder how deep that commitment runs. But the success of grassroots groups like the Fresh Produce Art Collective and the Ladies of Lawrence Artwork (LOLA) proves that ...

lawrence.com: At the risk of oversimplification, there's capital 'A' Art and then there's arts and crafts. Where does what you find at LOLA sales fit in on that spectrum?

Furan: I don't think my product line is driven by a big 'A' art, but everything is handmade by me in my Lawrence studio. I can't compete with the prices of (Chinese-made goods), but my stuff remains affordable and unique and people around town seem to love it.

Kuluva: Much is somewhere in the middle.

Grater: Why not just show everything? I liked having Leslie's prints, Kendra (Herring)'s small art, and Molly Murphy's work. I do think that's art with a capital 'A', but it's manageable to do with LOLA.

Do you think art needs to be more accessible, in Lawrence and anywhere else?

Kuluva: Definitely. I think that's the whole reason I ever got into printmaking. There's not just one-so they can be accessible and affordable and I don't have to cry every time I part with something and decide if the person is good enough to sell it to. It's a comfortable avenue to sell your stuff. It's not really judged and it's really open to whatever you've been working on. It's inviting, I think. 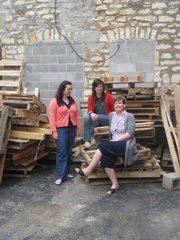 Furan: I feel like the structure of LOLA is loose and fluid. Like Leslie said, we don't have a juried committee, there are no fees associated, no curator. We find venues in town that allow us to have their venue for free and are really generous and supportive. I think Lawrence is great for opening up different kinds of venues and taking risks. I think Lawrence needs more art venues but I would say that LOLA is more accessible to every person.

How would someone get involved with LOLA?

Grater: I get approached a lot about being a part of LOLA. I wish everyone could, but when we were doing large shows it was really hard if you don't have a curator. Having a core group of people that we know we can rely on is really important.

Kuluva: It seems like there should be five other organizations doing the same thing.

Grater: I've definitely offered up the name to other individuals, but nobody's ever taken us up on running their own shows. We started in '04, and there are a lot of details. On top of my business, it's a lot of work.

In part because of what you and others have been able to do, it seems like there's a viable, noticeable presence of female artists in Lawrence. There seem to be so few women playing music. Any idea why there's that disparity?

Grater: My boyfriend made a funny comment-he said 'it seems like this generation, these renegade craft fairs and bus craftacular and all these things are really popular for DIY businesses. It seems like every boy is in a band and every girl has her own DIY company.'

I wonder why that is-boys wear blue and girls wear pink?

Kuluva: I don't think we were brought up to bang on pots the way our brothers were.

What keeps you from going elsewhere?

Furan: I started my business in Los Angeles but I'm a Kansas native. Lawrence is such an easy place to live; it affords you the luxury to do things that I think would be a more hobby way if you were living somewhere else. I like the ease of Lawrence, and I've got an awesome network of friends.

Kuluva: I just like it here. It always sounds like a good idea to go somewhere else and it never feels like home. Even the douchebags here aren't as bad as they are everywhere else. It feels like we still have control of this place. Â»