Alaska Sen. Ted Stevens, the longest serving Republican member of the Senate best known for funding the infamous "Bridge to Nowhere" and for describing the internet as a "series of tubes," was indicted last week on seven counts of making false claims regarding thousands of dollars worth of gifts he received from an oil services company. *:Stevens denies the corruption allegations and has vowed to fight the charges, saying he's much too old to survive the "series of tubes" he'd likely receive in a prison shower.

Sen. Ted Stevens, R-Alaska, walks to a waiting car as he leaves federal court in Washington where he pleaded not guilty on charges that he lied about hundreds of thousands of dollars in gifts from an oil services contractor.

John McCain released an ad last week comparing Barack Obama to Paris Hilton and Britney Spears, charging that Obama was merely a celebrity and unfit for the presidency. Also last week, McCain-who has a history of skin cancer-had a suspicious mole removed from his temple, raising concerns about the 71 year old candidate's health. *:Facing criticism for the sharply negative tone of his campaign, McCain stood by the Britney Spears/Paris Hilton ad. "This country can't afford a president who isn't despised by the rest of the globe," said McCain. "It would undo eight years of proud tradition." Also keeping in line with McCain's platform, his suspicious mole was flown to a Slovakian black site where it was beaten and waterboarded until confessing to being cancerous.

Texas oil billionaire T. Boone Pickens, a prominent supporter of George W. Bush and financial backer of the Swift Boat Veterans for Truth campaign that helped derail John Kerry's presidential bid in 2004, spoke in Topeka last week about his plan to wean the U.S. off of foreign oil and focus on alternative sources of energy such as wind farms. *:When conservatives find out that an oil tycoon who helped destroy the reputation of a Democratic presidential candidate is now advocating a clean energy future, Pickens also hopes to harness the energy of their exploding heads.

The House Judiciary Committee last week voted to hold former Bush adviser Karl Rove in contempt for failing to honor a subpoena compelling him to testify before the Congress about his role in the firing of U.S. Attorneys and the imprisonment of the former Democratic governor of Alabama. Also last week, a federal judge ruled that former White House aides Harriet Miers and Josh Bolton are not immune from subpoenas issued to them by Congress. *:White House spokesperson Dana Perino said in a press conference the Bush Administration takes these recent developments very seriously, and that "animpotentcongresssayswhat?" 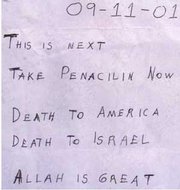 The chief suspect in the anthrax attacks of 2001, Bruce Ivans, committed suicide last week as the FBI's investigation began to close in on him. Ivans was suspected of mailing anthrax spore laced letters to media outlets and Democratic lawmakers, killing five people and sickening 17. *:Ivans requested in his suicide note that he be cremated, and that his ashes be mailed to "traitorous liberals and the Jew-run media." Â»