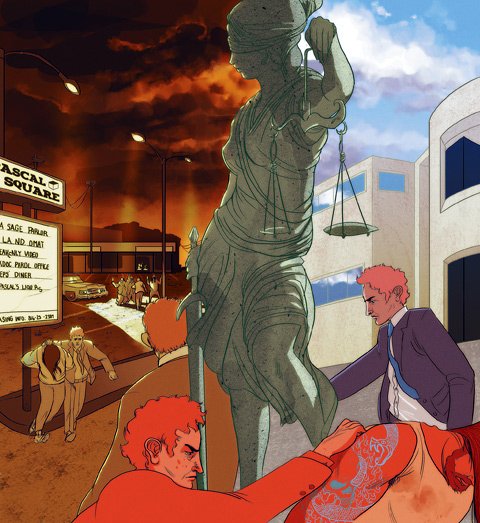 In case the kid turned out to be a jerk, the kind who pulls a gun, Robson, 47, wore a bulletproof vest and had a handgun holstered on his right hip. A Taser sat on the armrest between him and his son-in-law, Steven Allen, who rode shotgun. In the back was his son Brock Robson.

His cell phone rang. Robson's number is posted next to the phone in the Douglas County Jail and in jails throughout the state, chiefly in northeastern Kansas. Calls come in from the time he wakes up until the time he goes to sleep.

The phone "is our livelihood," says Robson's wife and co-worker Dana Robson. "When he's in the shower, it sits on the back of the toilet. You don't miss a phone call. You miss a phone call, you're missing business."

A lot of business happens at about 2 a.m., so a lot of bail bondsmen don't sleep. Robson used to answer calls overnight, and just about every night a call or two would come in, often for someone who got a DUI, and he would drive to the jail and post bond. Now he forwards overnight calls to Brock or Allen. 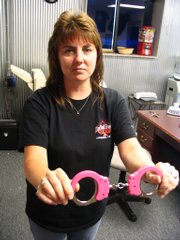 Robson answered his phone quickly. "Hello?" he said, his voice tired and a little gruff. "I'm here." He pulled the truck to a stop near 26th Street and Redbud Lane and got out to talk to a flustered woman in a white tank top who had come out of an apartment.

A minute later he was driving north, irritated. Now the kid was supposed to be at a North Lawrence hotel. A 28-year-old drug offender, the kid was likely to be in a surly mood, Robson said to his son and son-in-law as he drove, and he weighed about 350 pounds. "I can tell you now," he said, "he don't want to go back to jail."

Just about everywhere outside the United States, the commercial bail bond business is either nonexistent or outlawed. The ruffian image of the bounty hunter, making defendants pay an arm and a leg to post bond they can't afford themselves and then ruthlessly hunting them down if they don't show up to court, isn't the norm, as any bondsman will tell you, but it isn't a total myth either.

"Several years ago," says Robert Wade, treasurer of the Kansas Bail Agents Association, "it was kind of a Black Bart-type thing going on. These bondsmen were thugs and had ties to criminal activities in their past. They were rough and they were tough."

A person can make a quick buck writing bail bonds, and part of the job is hunting down alleged criminals and dragging them to jail. The line of work can attract a crowd that's as callous as their clientele. But over the years, as the industry has become more self-regulated and organized, the bad elements have been marginalized, Wade says. 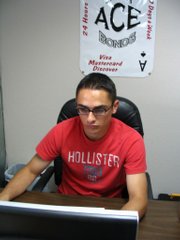 "We police our own people," he says. "If there's a bondsman that is using methods that he shouldn't be with defendants-coercion, discounting bonds, charging too much-we report that."

A few states-Wisconsin, Oregon, Illinois and Kentucky-have banned the commercial bail bond industry. This means the government has to do for itself the service of bail bond companies that's most useful to the judicial system: tracking down defendants who skip court. Bounty hunters are generally very good at finding people who owe them money.

A Justice Department report published last year found that, in addition to being captured more frequently when they fail to appear, people who use bail bond companies are far more likely to show up in court in the first place-their failure-to-appear rate is 18 percent compared to 30 percent for those who post unsecured bonds (in which the defendant merely promises the court to pay if the court date is missed).

"Basically what it comes down to is, with the private-sector bail bondsman," Wade says, "there is zero, zero, zero charge to the taxpayer."

While some other states have imposed tight restrictions on the bail bond industry, statewide regulations in Kansas are light. But this can cause headaches for bail bondsmen, as rules vary from judge to judge. Some, Wade says, allow bondsmen to charge clients whatever they want. Others restrict the fee to 10 percent-the industry standard-and impose other rules. One Kansas judge, Wade says, has been known to not let defendants out on bond without a clean drug test.

Robson got into the business six years ago in the same way that a lot of people do, writing bonds on nights and weekends to earn some cash on the side. After he hurt his back and had to quit his job working as a terminal manager for a gas pipeline, he started writing bonds fulltime. Eventually, Dana started helping him with the stacks of required paperwork.

Two and a half years ago he started Ace Bail Bonds, which has its main office down the road from the Douglas County Jail, a second office in Topeka and has 12 people writing bonds. To keep the flow of money steady in an unpredictable business, they, like many bail bond companies, do electronic home monitoring and ignition interlock as well.

Robson hadn't driven far when his phone rang again. "Hello:Quality Inn on Iowa? That's not even in North Lawrence." Robson had a bond to write in less than an hour and didn't feel like chasing this guy from one spot to the next. He drove north on Iowa Street and turned into the parking lot outside the Quality Inn, immediately spotting the big man, talking on his cell phone beside a silver Monte Carlo with a woman at the wheel, looking like she might take off.

Long before this juncture arrived, the man had paid Robson $100 to post a $1,000 bond. Robson's fee can vary depending on the defendant's circumstances-it may go up, for instance, if Robson has to drive an unusually long way to post the bond- but it's usually the standard 10 percent. If the defendant skips and Robson can't find him, the $1,000 bond forfeiture falls to the co-signer.

Because of that, it is often the co-signer-the woman in the white tank top-who leads Robson to a client who doesn't want to be found. If the co-signer goes missing too-this is why Robson doesn't allow lovers or spouses to co-sign-he would have to pay the forfeiture. That's the risk. When the bond amount gets high, upwards of about $50,000, Robson asks for 100 percent collateral to be safe. For a six-figure bond, a defendant might put up a house.

"Just like a loan at a bank," he says, "the bigger the loan, the more secure you're going to have to have it, or they're not going to give it to you."

Robson, Brock and Allen acted fast, hopping out of the truck and confronting the man before he had a chance to run or duck into the Monte Carlo. The three men assumed an air of brisk politeness, waiting a few moments as the man finished his phone conversation and then handcuffing him.

"You ain't got nothing on you that you don't want to take to jail, do you?" Robson asked. He didn't, so Allen made sure he was comfortable in the front seat of the truck and slid the seatbelt over his big body before joining Brock in back.

The sign that customers see on their way out of Ace Bail Bonds.

"This couldn't wait till tomorrow?" the man asked.

Robson reminded him that he was supposed to turn himself in on Friday but he had let it slide until today. "I can't keep letting you off," he said.

They went back and forth like that until the man, who said he was heading to prison for seven months for missing his drug rehabilitation and at one point offered Robson $900 to let him go, was processed and locked up in the Douglas County Jail, down the road from Robson's office.