A very large percentage of my life between 1999 and 2003 was occupied by the original Soul Calibur for the Dreamcast. I've always enjoyed the Mortal Kombat, Street Fighter, and Tekken series, but Namco's weapons-based fighter was the first one to make me cross the line into obsession. It featured perfect controls, beautiful graphics, stunning gameplay, and could be equally enjoyed by seasoned veterans or new players who simply mashed buttons (Maxi players, I'm looking at you). Soul Calibur II was a bit of a disappointment with some odd guest characters, and Soul Calibur III was better in the gameplay department but featured some uninspired stages and an awful single-player mode. Now, the acclaimed series makes its current-gen debut with Soul Calibur IV, the first in the series to feature online play and the best since the original.

SCIV features a robust cast of fighters, each with distinctly different fighting styles, strengths, and weaknesses. Even the similar characters (Kilik/Seung-Mina, Astaroth/Rock, Sophitia/Lizardman) are differentiated enough to avoid repetition. Some characters that were unstoppable in previous versions have been taken down a notch, specifically Mitsurugi. He's still a potent fighter, but nowhere near as devastating as he was in previous installments. Kilik is still a great character for both veterans and new players, while more advanced characters like Zasalamel or The Apprentice will take a little more time in Practice mode. 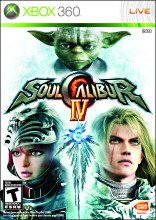 One of my favorite modes in SCIV is the Create a Soul option. This was introduced in PS2-only third entry in the series, but it is rounded out much more in IV. I created spot-on dopplegangers of Liu Kang, M. Bison, Shao Kahn, Raiden, and the Incredible Hulk with no problem at all. My favorite character, however, is "America", the gigantic sword swinger with a bald eagle head, a blue leather jacket, red and white basketball shorts, and a flowing red cape. It was great taking my creation (along with his "Uncle Sam" sword and "Toby Keith Stomp" signature move) online to show off to other Soul Calibur players. In the 50 or 60 online bouts I've fought in so far, I've already seen a lot of clever ideas for characters. People seem to love taking their creations online, which really helps keep things fresh considering you don't know who or what you'll be facing next.

The aforementioned online mode is something SC fans have wanted for a long time. Thankfully, it's (usually) lag-free and runs with little to no problems. You'll get the occasional fighter who drops out right before you finish him off, but most of the battles I've participated in have been fast-paced and a great new way to experience the series.

Outside of the standard Arcade mode, there is a short Story mode for each character, as well as a longer Tower of Souls mode. Story mode is five stages long, and usually features one or two short cutscenes featuring your fighter. Tower of Souls is more of a gauntlet, forcing you to either ascend or descend a tower with various fights on each floor. Variables will be thrown at you on each floor, and special equipment can be obtained by completing level-specific goals. It's certainly better than the terrible Chronicles of the Sword mode from SCIII, but not quite as entertaining as the mission mode from the original.

The graphics are absolutely stunning, in both a technical and artistic sense. Stages, fighters, and particle effects are fantastic in HD, and everything moves at a great framerate. All of the characters and their costumes are beautiful, and it's hard to think of another fighting series that even comes close to this level of quality. The music and sound effects are just as great as they've always been, and the cheesy announcer is back in full force.

It's great to see this series going strong again after a couple of somewhat disappointing installments. My main gripe is the omission (yet again) of the 8-on-8 Team Battle option from the original, but it's a minor one. Online play is great, Create a Soul mode will keep you busy for a while, and the fighting action is as fast-paced and nuanced as ever. A must-buy for fans of fighting games.