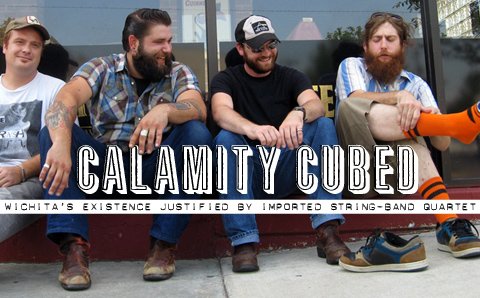 Whatever you do, do NOT bring up Split Lip Rayfield in the presence of The Calamity Cubes. They think SLR is a perfectly good band and all, but they're sick and tired of being compared to the area's reigning string-band magnates. Sure, the Cubes do perform with similar instruments acoustic guitar, banjo, mandolin and upright bass. But they'd be hard-pressed to call themselves a bluegrass band, instead preferring to identify as a bunch of songwriters who happened to learn bluegrass instruments. After a short and torturous run in Wichita, three out of four Cubes relocated to Lawrence to play a revolving circuit that includes The Replay, The Bottleneck, The Gaslight Tavern, Papa Keno's, Dempsey's and the river that runs through it all. All four members Patrick Herd, Brook Blanche, Joey Henry and J.J. Hanson infiltrated our podcast studio with boogan iced coffees and a new album in tow.

Whatever you do, do NOT bring up Split Lip Rayfield in the presence of The Calamity Cubes. They think SLR is a perfectly good band and all, but they're sick and tired of being compared to the area's reigning string-band magnates. Sure, the Cubes do perform with similar ...

lawrence.com: You managed to put whiskey in your iced coffee : How's that tasting?

Herd: They said they put some blow in the whipped cream too.

Blanche: Whiskey is the new black it goes with anything.

What else have you fellas figured out that you can put whiskey into?

Herd: You can put it in the toilet when you're done with it.

What sorts of venues do you play at?

Blanche: Fridays and Saturdays we play real shows on real stages : We go to Papa Keno's on Thursdays and Sundays and Dempsey's on Wednesdays. We're usually picking down by the river before that.

Henry: On Tuesdays our friend Leaf hosts an open mic at the Gaslight Tavern.

With so many opportunities to go out and play music and drink, how do you afford your bluegrass lifestyle?

Herd: Tabs that never get paid.

Is this your first CD?

Henry: It's the first one that's been wrapped in plastic and has a bar code.

Herd: The first ones were manila envelopes with stickers.

There's a picture on the back cover of a bloody hand playing the banjo. How'd that work out?

Henry: It works out a lot better now, because it's all scar tissue so whenever it opens up it doesn't bleed as much. The banjo is kind of like a cheese slicer all the strings are real thin, and I don't play traditionally.

What are your plans for the fall?

Henry: We get to go to Austin pretty soon and hang out with the White Ghost Shivers for a show at the Continental Club. We might have a little Colorado weekend coming up.

For a while Wichita was your home base. What brought you to Lawrence?

Blanche: Well, it was sucking our soul out being in Wichita. I had this idea that Wichita was technically the center of the fucking planet, and we could just go wherever from there. But it's better to be in Lawrence.

How would you describe your sound?

Blanche: We're just a bunch of songwriter dudes hanging out.

Herd: When we originally got together, we just happened to have a few instruments around. We were like, "OK, three guys can't play guitar at the same time, so you take this and you take this." We all kind of learned as we went.

Have you guys played with other groups around town?

Hanson (a.k.a. Yukon Jimijon): I was in a band called GCDC. We were playing with these guys at the Rack Em Up in Wichita and it was love at first sight. Things went south with my old band and these guys didn't have a bass player. I pretty much insisted on playing bass, although I wasn't a bass player at the time.

It was official when we all ate at Perkins one day and there was a penguin in one of those claw machines : After we all stuffed our faces with chicken-fried steaks and eggs, we went over to the machine and these guys said, "Well, if you get that penguin out of the machine, you're in the band," After two tries, I got the penguin out, and these guys have been stuck with me ever since.

Henry: It was a good thing he got it in two tries too, 'cause I don't know how many more we could have afforded.

Blanche: We were out of quarters : We were about to go get our tip back from the waitress.

Being transplants to Lawrence, tell me about some of things you've found to do in the summertime.

What did they do to you?

Henry: I like to skateboard around town with my banjo.

You can actually play banjo and skateboard at the same time?

Henry: My favorite thing used to be to bomb hills with a mixed drink in the morning. I felt like my Grandpa reading the newspaper or something. Since I quit drinking, I don't get the soothing sensation of that anymore. Recently I discovered a similar soothing sensation, which is bombing hills with my banjo.

Blanche: Banjo is your new bourbon.

Henry: I thought Red Bull Light Blue was my new bourbon, but maybe it's banjo. What's hilarious is that J.J. is one of the best banjo players in the world, and he's stuck playing bass.

I'm impressed. I can't skateboard or play the banjo.

Blanche: I can't even watch him doing that without falling down.

Bottom line, a couple of comments were blown out of proportion by the opening sentence of the article and that's unfortunate. You can have a great deal of respect for a band without crediting them as an influence.

duplenty: They don't want to be mentioned in the same breath so it's all good. You can still worship at the feet of the almighty Split Lip and appreciate The Cubes for THEIR sound. Two totally different bands both great in their own right.

Oh how I've missed you JMFK! Don't listen to the haters Joey, your orange socks are hot. I'm going to see you soon. Love,Stephanie from P-Sub

what a calamitously good lookin' bunch, orange socks and all

Hey,Split lip is great, but CHECK OUT THOSE SOCKS!!! New or old,Comparing is pointless folks AND a waste of breath,(your holy graciousness). Please note that the band had never anticipated and hardly participated in the interviewers comparisons according to the mp3 interview.

The "bottom line" comment by Agent is choice!Duplenty is a dooshbag