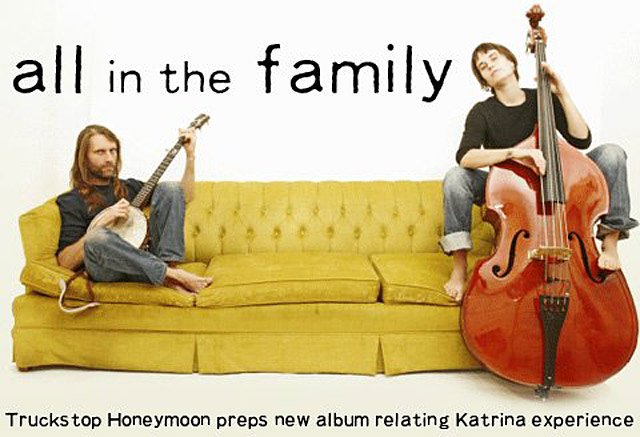 Families have one primary advantage over cities: they're mobile. The forthcoming Truckstop Honeymoon album "Great Big Family" explores the new roots Mike West and Katie Euliss have planted since fleeing New Orleans in the wake of Hurricane Katrina. The couple spearheaded a Mardis Gras street parade on Mass. St. last ...

Families have one primary advantage over cities: they're mobile. The forthcoming Truckstop Honeymoon album "Great Big Family" explores the new roots Mike West and Katie Euliss have planted since fleeing New Orleans in the wake of Hurricane Katrina. The couple spearheaded a Mardis Gras street parade on Mass. St. last February, transplanting a vivid part of their life that seemed virtually lost three years ago. Now firmly established in Lawrence and raising three children, the Honeymooners are sounding better than ever with support from a cast of local musicians and a new batch of songs that candidly address their Katrina experience. They brought a freshly burned copy of the new album into our podcast studio to share along with their stories of recovery and rebirth.

lawrence.com: The name of the new CD is "Great Big Family," and you sure do have one.

West: It's getting that way, yes.

Is that the inspiration behind it?

West: All of our records to some extent draw on our family life.

Euliss: Sing about what you know, and live the life you sing about, right?

When you first got to Lawrence 2 1/2 years ago, did you think you were going to stick around?

West: We knew we were going to give it a go. It's turned out better than we could have expected; people have been so good to us.

It seems like there's been a lot of collaboration outside of the duo that's been Truckstop Honeymoon since the start.

West: Yeah, we found a great pool of players here Colin Mahoney who plays drums with us and wonderful horn and piano players.

Euliss: Many of whom marched with us on Mardis Gras this year.

West: We let a year go by with no Mardis Gras and it so happened that this year Mardis Gras fell on my birthday. Katie was like, "To heck with it we gotta have a parade." So a month or two before we started calling friends and musicians and getting together once a week and having practice with the idea that we'd have a walking parade down Mass. St.

It was beautiful weather right up until Mardis Gras day, when we got freezing rain. We thought, "How can we expect anybody to come out with us?" But we made a few tentative calls and the strength and stubbornness of the Midwest persevered. Everybody marched in the freezing rain playing tubas and fiddles and banjos and banging on things. We walked up Mass. St. in and out of businesses, some of which were hospitable, some of which were like, "What the heck are you doing?"

Did you do anything like that while you were in New Orleans?

West: Yeah, it's a tradition : It's different from the big parades with the floats. These are neighborhood parades where you have the players and the bands and everybody just joins the parade. It goes from bar to bar and by the middle of the day it's this huge mess of people.

How did it feel to do it here?

West: It felt like a moral victory, just to see everybody out there soaking and cold and having fun.

Tell me about some of the things that informed this new record.

West: It's really a record about transition.

West: Stuff about the flood, and stuff about moving here. A lot of people kind of expected to hear those songs in the album we put out directly after the flood, but really it was too close and we wanted to just write a fun record. This does have songs that are about the transition: some of the losses and then some optimistic stuff : For a lot of people, their relationship to New Orleans is somewhat like a relationship to someone you love who abuses you. It's always been a little bit like that, because it's a dangerous town and bad stuff happens. After the hurricane, it was really like that.

Recently there was a documentary produced about you guys moving here in the wake of the flood ("Won't Let the Angels Take You Away," directed by Nathan King Miller). What did you think watching that?

West: Well, neither of us were looking forward to seeing it. Unless you're really vain, the thought of watching a full-length movie about yourself is somewhat scary. But actually, I was surprised it was like watching a movie about someone else. He caught a mood.

Euliss: It was amazing to have that documented. I could never tell that story to my kids and have it communicate that experience. I watch it further down the road now and it's almost shocking : I kept trying to crack jokes and stuff, because that's how I deal with major disasters. It was hard to process it and it takes a lot of time, just like these songs coming out now that might be about that experience. Little things just leak out once in awhile that you don't realize are still in there.