"Shopping at a grocery store instead of eating out. For liquids I go to Dillon's, then for solids I go to Checkers. Dillon's has really good deals on milk and water, and Checkers has really good deals on meat and cereal. A lot of times I'll buy shoes at Payless. Oh, and I wear a lot of free t-shirts. I got this one from Wescoe Beach-it was explained to me later that it stands for 'Cock meat sandwich.' It's apparently from Harold and Kumar, but I had never seen it, so I thought, 'All right, chicken plus meat plus sandwich!' I also make money by selling plasma. I get $65 a week for doing about three hours of work, and by 'work' I mean sitting on a bed and watching TV. They used to show DVDs, but they got in trouble for showing rated R movies. Usually they'll have Comedy Central playing-they were playing 'Who's the Man?' the other day, and I'd never seen that before. Dr. Dre was in it-did he lose a lot of weight? He was fat in that movie. Ohhh-there's two Dr. Dres? That makes so much more sense." 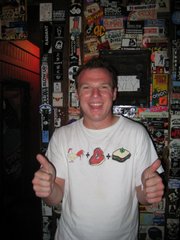 What do you splurge on?

"Usually IHOP or alcohol. Generally in the same night-alcohol then IHOP. If it's three in the morning and I'm just sitting around, I'm not just going to go to IHOP, but if I'm drunk I'm going to IHOP. Perkins is slightly more expensive. If I could have anything it would be a sleep number bed. That's so intriguing to me. I think I'd be an 80."